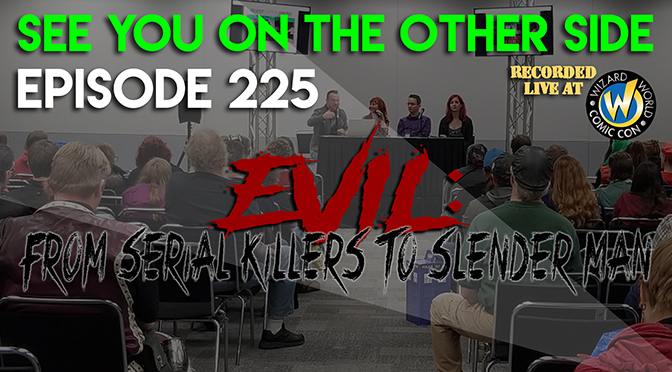 This weekend we did our first live podcast from a convention! Allison from Milwaukee Ghosts, Scott from WhatsYourGhostStory.com, Wendy, and I did a panel on EVIL at Wizard World Madison and it was a fantastic experience. Here’s how they described the panel in the literature:

From urban legends to comic books to true crime, evil permeates our pop culture. Hear about real cases of evil and how they influenced movies and TV with Madison haunted historian Mike Huberty, Milwaukee paranormal researcher Allison Jornlin, Waukesha Ghost tour guide Wendy Lynn Staats, and Chicago ghost story author, Scott Markus. From Ed Gein and Psycho to John Wayne Gacy and evil clowns, the Slenderman to famous demonic possessions, the crew behind Wisconsin paranormal and pop culture podcast, See You On The Other Side, discuss the real life evils hiding under the fiction.

So, we each took a topic that had a Wisconsin connection (since we were in Madison) of evil in real life that had paranormal implications and also had a ton of pop culture connections.

It was a great crowd and a lot of fun and if we met you at the convention, then thanks for coming to visit us at See You On The Other Side for the first time!

Evil often hides in the form of good intentions. For the song this week, we go back to this worn-out, but still valuable quote:

He who fights with monsters might take care lest he thereby become a monster. And when you gaze long into an abyss the abyss also gazes into you.

Nietzche, Beyond Good and Evil

The mantra of revolution is often that once a few “necessary evils” are taken care of, they can stop and that the ends will justify the means. Whether it’s the French Revolution or the Bolsheviks, history hasn’t borne that out.  Meet the new boss, same as the old boss. Here is Sunspot with “Evil On Evil”.

Tie up the noose
payback’s a bitch
fail the purity test
we’ll burn the witch. 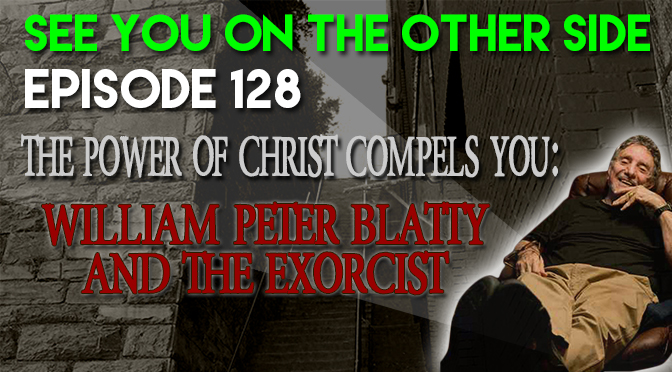 While 2017 hasn’t had the murder rate of 2016 yet, the year did start out with the loss of William Peter Blatty, the author of The Exorcist, with the news ominously coming out on Friday the 13th in January. While he did create one of the most famous works of horror of the Twentieth Century, he was much more than just a horror writer. His stories dealt with questions of faith, guilt, temptation, and how a just and loving God could allow so much evil in the world.

He lived long enough to see the continuation of his story in the latest Exorcist TV Show, which is the best thing to happen to the franchise since The Exorcist III, (you can skip The Exorcist II entirely and the fourth one was so bad they had to shoot two different versions of it to try and salvage some of their investment. )

We’ve even opened up a couple of shows with this sweet George C. Scott monologue from The Exorcist III: Legion. But we’re not the only band that used it, it was particularly popular with ultra-heavy bands and sampled on albums from Beyond, Cryptopsy, Children of Bodom, Slayer, and even Guns n’ Roses have used it in live shows. Also, it was reportedly the film that Jeffery Dahmer was watching when his apartment was raided by the police. So, great job, Blatty!

But the reason that we still talk about The Exorcist today is not only because the shocks and the scares of watching a twelve-year old girl do unspeakable things with a crucifix. We’ve seen much more edgy horror movies (especially from France, those dudes are sick!)

One of the main reasons that demonic possession is so scary is because lots of people believe in the Devil. If you’re Catholic, and Blatty’s mother was deeply Roman Catholic and the author himself kept up with his faith (well, except for the whole getting divorced three times thing – but the first one was annulled, which is a very Catholic thing to do!) then rejecting the Devil is right in the Baptismal promises. You’ve got to talk about Satan if you’re a Catholic, his temptations lurk all around.

It was the research and the  inspiration that Blatty took from real life exorcisms and cases of demonic possession that made The Exorcist feel so real. Allison Jornlin from Milwaukee Ghosts joins us in this episode to talk about those cases, famously one happened in St. Louis in 1949 (The Roland Doe Case) but it was also inspired by a lesser known  case involving  a Wisconsin Exorcist Priest-Hero named Theophilus Riesinger (who will also get his own episode sometime!) and an exorcism he performed in Iowa, described in the 1935 book Begone, Satan!

When he was 87, Blatty would write his own book on personal paranormal experiences called Finding Peter that chronicle is own faith and brushes with the supernatural, but he’ll always be best remembered for being a writer capable of terrifying audiences so shockingly that his work became a cultural touchstone, while keeping it sensitive and thoughtful enough with ideas of faith and hope, that it served a bigger purpose than merely gruesome entertainment.

One last FYI, if you hear that Father Malachi Martin was the inspiration for the Father Merrin character in The Exorcist, don’t buy it. It’s just marketing for the new documentary about Malachi Martin’s life (which looks cool in its own right and Malachi was a colorful character who we’ll have to dive into sometime), but here’s the truth in an article in the Los Angeles Times

The New York Times and the Los Angeles Times, however, dismissed Martin’s work as unbelievable. William Peter Blatty, who wrote the best-selling “The Exorcist” and the screenplay for the 1973 movie of the same name directed by William Friedkin, gave “Hostage” a scathing review in the Los Angeles Times, assailing its accuracy as well as Martin’s style. “I loathe this book,” Blatty wrote. “It gives possession a bad name.”

For this week’s song, we were looking for a track that appealed to the basest instincts of people, just like Pazuzu (or Captain Howdy) did in The Exorcist, so we selected a Sunspot song that deals with faith in its own way and sometimes that faith gets betrayed when people fall into temptation, anger, and resentment. And when that happens, the world can come “Crashing Down”.

Well, I guess I thought the fight,
would bring out the best in you,
because you always said my faith,
would see you through.
And as we sat there in the calm before the storm,
there were barbarians at the door… and I heard you,


And I know you hate the world,
for what it put you through.
But you struck against the ones,
that believed in you.
I always thought you were to strong to be afraid,
until I watched you run away… when I heard you,

As you sit there in your hole,
where your screams can’t break through,
well you’ve lost your freedom now,
look what your anger’s done for you.
There is no quarter, no exception to the rule,
there’s no one left to listen to you…
And you can cry wolf a thousand times and watch the rest of us survive.