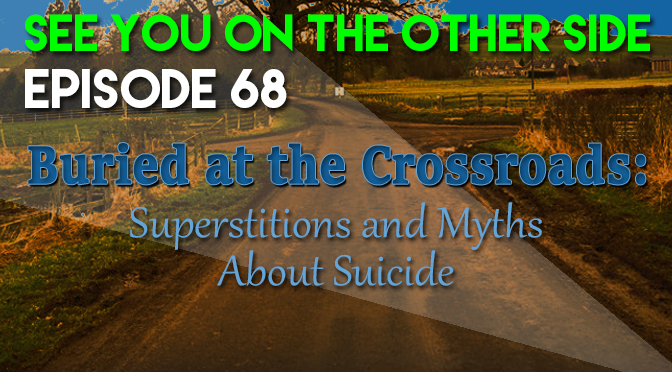 The topic this week is a difficult one to approach. It’s very personal and it’s about as unpleasant as they come. It’s just something that we don’t like to talk about. And during the Holiday season where it’s treated as a fact that more suicides occur than at any other time of year, it’s a topic that we thought was worth discussing.

Just to say something right away, if you ever have serious thoughts about harming yourself, please talk to someone as soon as possible. You don’t have to be alone. The National Suicide Prevention Lifeline has a ton of resources and people that are ready to talk to you 24 hours a day.

I became interested in the lack of conversation about suicide when I worked at a television station in the early ‘Aughts and there was a suicide cluster in a nearby town that we didn’t cover on the news. It seemed like something we should be tackling versus hiding, but they were worried that the more attention was given, the more chances of it happening again. There may be some truth to that, but since it feels like such a topic that we shy away from due to its uncomfortable nature, I wondered whether or not it was a good idea.

But one of the first myths about suicide we can dispel is the increase in suicidal activity over the Holiday season, which isn’t true at all, suicide rates actually decline over the Holiday season. That’s kind of one of those “facts” that people just believe kind of like the idea that more people get arrested when it’s a full moon than at different times of the month, even though that doesn’t actually happen. In a Psychology Today article, it says:

One of the primary buffers of stress and depression is our social identity. The holidays, if anything, maximize social connection for most people. Hence, suicide rates are lower. Heat also is associated with higher suicide rates. And for most people, the Christmas holiday season isn’t exactly a scorching hot affair. Even in hot climates, this time of year isn’t especially hot relative to the rest of the year (think Florida in the winter, warm, but not hot).

And when it comes to the paranormal and ghost stories, suicide victims are overrepresented. Even in Madison where we live, ghosts of suicides are said to inhabit two of the theaters downtown as well as the state Capitol. The idea that spirits will become restless after killing themselves is an old ghost story trope and it comes from the Christian view of taking one’s own life.

Indeed, in an article in Cult Nation, writer Mark Laskey makes a big deal of the “Rules of Desecration” where in Christianity, suicide didn’t just become a sin, but it was the Devil himself who was causing these people to take their own lives, and suicides from Germany to England would be buried in different parts of the cemetery, or at crossroads, because it was thought that the restless spirit would wake up confused and not know which way to go when it came out of the ground. They would further outcast the body of the poor soul by not dignifying it with a proper burial.

Also, crossroads were supposed to be places where witches met and portals to the next world. Not surprising to us, since we talked about the famous Robert Johnson Crossroads in our very first episode, “Making A Deal With The Devil”. But it was legal in England until the 1820s to bury a suicide victim at a crossroads and put a stake through his heart(!) Right, that’s incredible. The last person buried like that was in 1823 and his heart was actually staked to prevent him coming back as a vampire. Of course we still associate so much stigma with this act, people believed at one time it might create a monster in death. So much so that they felt free to desecrate the corpse.

And in Western Society, we still associate suicide with the demonic. The opening of M. Night Shyamalan’s Devil shows a suicide as bringing the Devil forth, half the people that Damian manipulates in The Omen (which was the inspiration for Iron Maiden’s “Number of the Beast”)  end up killing themselves, and in Wristcutters: A Love Story, suicides are sent to a special Purgatory to contemplate their sins.

So, no wonder that Ozzy Osbourne was sued for his song, “Suicide Solution” in 1984 after California teenager John Daniel McCollum shot and killed himself and the parents saw the record spinning next to his dead body. The lawsuit was eventually dismissed and Ozzy to his credit, did sympathize with the parents, but said that the song was about alcohol and the death of Ozzy’s friend, Bon Scott (whose ghost we talk about in our interview with rock journalist, Susan Masino).

When I was younger, I thought it was ridiculous to sue an artist for the death of your child. And while I feel the lawsuit was frivolous, I believe Ozzy knew that the song would be provocative. Heavy metal deals with transgressive themes, it’s all about provocation. People who are disturbed are going to pick up on that. Poor John Daniel McCollum needed help. Ozzy isn’t responsible for his death, but provocative themes can set people off. As an artist, you need to understand that your work can have a powerful effect. It doesn’t make it your fault when something horrible happens, but the effect shouldn’t be denied either. Ozzy was deliberately transgressing traditional morality in those years and that comes with consequences , whether it was just for marketing or not. But that’s just my opinion, I know that your mileage may vary on that one.

Japanese culture famously thinks differently about suicide than Western culture. Seppuku, or ritual suicide, was a way for a Samurai to die with honor rather than die by his enemy’s hand or bring shame upon his family. With conformity and acceptance being two traits highly prized in the culture, many people believe it is more honorable to kill themselves as a way to preserve their legacy.

There’s a forest in Japan near Mount Fuji called Aokigahara , but is also known as “The Suicide Forest” where dozens of people go each year to end their lives. There’s a sign at the front encouraging people to think about their families and there’s been several films made about it (including one with Matthew McConaughey!)

Could certain places be cursed and encourage people to hurt themselves? That was the theory of a Ontario-based paranormal group that did an investigation at Prince Edward Viaduct in Toronto which is the city’s most popular place for suicides (I liken it to the Washington Avenue Bridge in Minneapolis) and they wanted to discover whether they could find more paranormal activity there than other places. The investigation didn’t turn anything up, but it was an interesting thought. Do certain places attract people to hurt themselves? Or can just hearing about a place put the idea in a suicidal person’s head?

When I first heard David Lee Roth talk about what “Jump” was about, I was a little shocked. He said that when he was coming up with the lyrics he thought of a news report the night before with a man threatening to leap off a building to his death. When a crowd formed below him, Roth said that there’s always some guy watching who says, “Might as well jump! Go ahead and jump!” Yeah, bet you’ll never hear the song the same way again. That’s why it ended up on Clear Channel’s suggested list of songs not to play after September 11th.

While many family members of the victims will go see mediums and psychics afterwards to try and get some comfort (here’s actually a hopeful article from Erin Pavlina who was married to a self-help author that Wendy and I both liked to read a few years ago), I hope these mediums really believe in the messages they’re getting because there’s a special place in Hell for people who try to exploit another human being’s sadness. And there is little that could be sadder than losing a loved one to this.

And it’s a scary and uncomfortable thing to talk about, but sometimes we absolutely need to. Otherwise it gets shrouded in superstition and myth, and that stigmatizes the people who need to talk about it the most.

This week’s song is “Dig Your Grave” from Sunspot, which was unfortunately inspired by the loss of one of our friends. It’s a track about forgiving someone you love’s suicide, “Dig Your Grave” is about letting it go. Frustration, sadness, anger, and hate add up to eventual understanding and finally, acceptance of what happened. We made a video for it using clips from LOST (so don’t watch if you care about getting spoiled for that show), you can also listen to the track right here.

This one is for fans of Concrete Blonde or early 90’s alternative, that’s really the sounds we evoked when we were creating it.