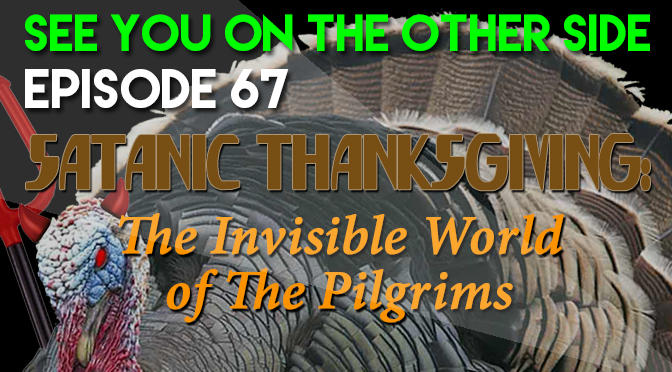 What do you think of when you think of Thanksgiving? Pilgrims and Native Americans, right? Coming together to overcome a weak harvest in Plymouth, Massachussetts and learning to accept one another in a spirit of peace. Yep, that sounds about right. The story of the first Thanksgiving is a nice one, except when you think about who the Pilgrims actually were and the invisible world they lived in alongside the real one…

Yes, they were brave leaving their homes and settling in the New World and don’t worry that this one of those Revisionist History posts where we’re going to mythologize Native Americans as saintly good guys and the Puritans as evil invaders, because the truth of things is never Black and White. But at the same time, it’s important to acknowledge exactly what the Puritans were.

They believed that the Church of England hadn’t gone far enough in eliminating Catholic influence on English religious life. The Protestant Reformation begun by Martin Luther in Germany had a huge influence on the Puritans, who felt that while it was great that the Church of England had separated from the Catholic Church (all because Henry VIII wanted to get a divorce from Catherine of Aragon and his buddy the Pope wouldn’t let him do it! And I made a HUGE error in this podcast, too, thinking that the Lion in Winter was all about Henry VIII’s situation, I even namecheck Peter O’ Toole, when I was thinking about a Man For All Seasons. In my head, I just conjured one of those great scenes with O’Toole and Audrey Hepburn at each other’s throats and was thinking that was the conflict between Catherine and Henry VIII, instead of Henry II  and Eleanor of Aquitaine, so I apologize for being so boneheaded on that reference!)

Okay, so the Puritans were religious extremists who left England, first for Holland, and then for North America and the ones that stayed were a major player in the English Civil War that left King Charles I headless (in fact, the Civil War was considered a “Puritan Revolution” for a long time.) So, why is that important? Well, I think it’s important to understand how deep these people’s faiths ran. They were Calvinists (named after French Protestant philosopher John Calvin, who’s also the namesake of the 80s cartoon character.)

So why does John Calvin matter? Because in his version of Christianity, doing nice things for people doesn’t get you into Heaven. In fact, God has already picked who’s going (the Elected, they called themselves), and humans don’t have Free Will, so it doesn’t matter anyway because some of us are predestined to go to Hell. Sounds kind of like a drag, but it’s something that people still discuss today. For a more modern take on Free Will, neuroscientist Sam Harris wrote a fascinating book on it (and of course, if you’d like an alternate take on it, you should probably listen to this song, just for the live bass solo alone!)

And Calvin also said that people constantly exist in a state of depravity that came down from our first sin in the Garden of Eden when Eve ate the apple, so humans are naturally bad. These people were surrounded by evil all the time. If humans are evil by their very nature and the only good ones are going to Heaven are the people in your religious community, well, there’s gonna be a lot of distrust of other people. To the Pilgrims, God punished you in this world for not being pious enough or for your sins, and the Devil was around you at all times.

Most of us in the modern age would consider the Pilgrims crazy and religious fanatics, they ran away from their own country to start a Utopian colony on the other side of the world. There’s another religious sect that did that and it ended with some poison Kool-Aid.

Because they always thought the Devil was surrounding them and could be in the form of their neighbor or anyone else, they tended to be incredibly superstitious. And they believed the Wilderness was the Devil’s Land, so forming a colony in the wilds of New England was something that was extremely dangerous. Yes, it was dangerous, but because they weren’t equipped to found colony, or is it because Satan was stalking them at every turn?

If you ever see horseshoes over a New England house, that’s the continuation of a Puritan superstition that witches don’t like horses (one of the reasons they ride brooms.) But these are the same people who thought that if you had rats in your home, you could get rid of them by writing a little note and if the rats ate it, they would leave (those are some smart, American Tail-style rats there).

The Thanksgiving that we often associate with the Native Americans and Pilgrims eating together is a really nice story. But the truth is that the Native American who could speak English and negotiated for the peace, Squanto (who had been captured on a previous slaving expedition which is why he had knowledge of the language), also ended up exploiting the natives’ fear of the English and it’s theorized that he was eventually poisoned by them.

16 years after that first Thanksgiving, the Pilgrims led an expedition to kill 700 Pequot men, women, and children during their Green Corn Dance. The Massachussetts Bay governor then declared a “Day of Giving Thanks” to celebrate the military victory. The Puritans weren’t afraid to take things by force because they could find Biblical justification for it.

And in a world full of Devil’s servants, no one stoked Satanic Panic more than the Mather family. Increase Mather was one of New England’s leading pastors in the mid-Seventeenth Century (and his silly name was in reference to the idea that everything in New England was getting bigger at the time, more settlers in the colony, more space as they took over new lands, and more of God’s favor…) Mather believed that God showed his pleasure and displeasure with the colonists directly and wrote about the way that the invisible world of the supernatural affected everyday life.

Between the writings of him and his son, Cotton, anther popular minister, they had old school “You’re Gonna Burn in Hell” fire and brimstone sermons down. Cotton had written about the last woman hanged in Boston for witchcraft (really for being Catholic) in his pamphlet, Memorable Providences, Relating to Witchcrafts and Possessions and would later write about the Salem Witch Trials, which is the tragedy of what he’s remembered for most in The Wonders of the Invisible World. Observations as Well Historical as Theological, upon the Nature, the Number, and the Operations of the Devils.

The Salem Witch Trials would end in the execution of 20 people and both Cotton and Increase Mather would write pamphlets and books defending the fearful worldview that ended up contributing to the deaths. We’ll give the Witch Trials their full due in its own episode, but it’s worth noting that this is the end result of Puritanical Righteousness.

Here, you can brush up a little bit on the Witch Trials as metaphor for the House Un-American Activities Committee, now that’s a good way to spend the day!

At the same time while the Puritans might have been crazy when it came to the Devil, they also paved the way for democracy in the United States, because laypeople electing their religious leaders was an important tenet of Calvinism and they laid the foundations for many of the ideals of our modern government. Like any history, there’s two sides to the story and they left us both negative and positive influences. In fact, Calvinism has been linked to the success of capitalism in the world. So, while they might have given us witches  and hysteria, they also might be responsible for the smartphone and elevation of billions of humans from the kind of life that Calvin’s comic books partner, Thomas Hobbes, would have described as “nasty, brutish, and short.”

This episode’s song is inspired by Cotton Mather’s work, “The Wonders Of The Invisible World”, telling the story of the invisible war between God and the Devil happening all around us all the time.

We were chosen
for this moment
We were chosen for this land
We are elected to be perfected
Our conscience clean as Pilate’s hands.

I know the monsters that you’ve dreamt
I’ve seen the hands that torment
But this is all part of all the plan divine,
to test your faith ’til you’re burned alive.

One thought on “67 – Satanic Thanksgiving: The Invisible World of The Pilgrims”