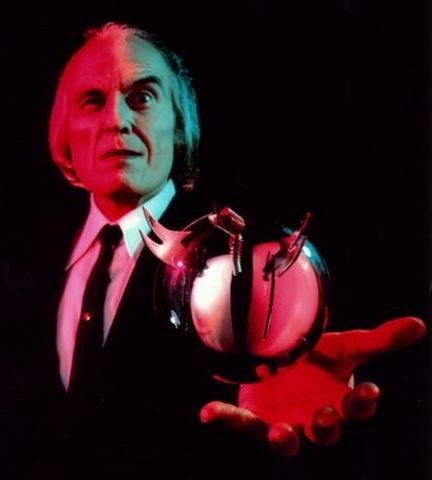 Actor Angus Scrimm passed away yesterday at the age of 89. If you’re a horror fan, then you’ll remember him as the evil undertaker, The Tall Man, from the Phantasm film series (the one with the flying silver balls that stick in people’s heads.) Number one, what an awesome stage name (he was originally born Lawrence Rory Guy). Number two, he was the one guy in the Phantasm movies that looked like he was some kind of an actor in real life. You can see why he was such a memorable presence in this supercut of his greatest moments from the highlights of the franchise (namely Phantasm 1 and 2).

Phantasm was mostly recently making the sci-fi news rounds because Star Wars: The Force Awakens director J.J. Abrams mentioned how much that he loves the movie and that he created one of the characters (Captain Phasma) as an homage to the film, the character even wears a special reflective mirrored armor like the scary balls that fly through the air in Phantasm. Abrams also gave Scrimm a recurring role in his TV show, Alias, because he was a fan of the actor.

Not that the other characters and actors in Phantasm weren’t memorable and  didn’t give it their best shot. Especially Reggie Bannister, you just gotta love that guy. I still use the phrase “Hot as love” sometimes when I’m done playing a song.

Angus Scrimm’s late in life success in the horror genre was preceded by a long career in entertainment journalism as well as being a go-to guy for writing liner notes on the insides of records – which was a thing back in the day when people used to buy albums, and he even won a Grammy for his work in the music industry!)

I always heard that he was a nice guy at horror conventions and his dedication to the character even as the budgets of the Phantasm sequels started getting less and less. So, I’m raising a glass to a life well lived.

I celebrated my eighteenth birthday with my first meal as a full vegetarian, a trip to the adult book store (who knew that Al Bundy’s favorite magazine was a real thing?), and a viewing of Phantasm III: Lord of the Dead, so the series has always been close to my heart. My friends and I were big fans of the series in high school because we appreciated Reggie’s dirty innuendos, the gross-out horror of the flying balls killing people, the surreality of the filmmaking, and the mashup of (spoilers for a 37-year old movie) beings from another dimension that enslave human souls after we die.

The Tall Man’s most memorable quote besides bellowing “Boyyyyyyyy!” is “You think when you die, you go to heaven. You come to us!” which is a special kind of terror. You grow up your whole life thinking that when you die, you go to a  “better place” (unless you’re a Calvinist that just believes most people are going to Hell anyway). But Phantasm introduced to me the idea that maybe the afterlife wasn’t wonderful at all, that there is something worse than death, a place you could never escape where you were turned into a zombie Jawa slave for eternity.  A reimagining of Hell where The Tall Man took the place of Lucifer and owned you.

Now, that’s some scary business right there and in some of the world’s earliest cultures, the Afterlife isn’t fun at all. In fact, if you’ve ever studied the Epic of Gilgamesh (the world’s first action hero!) you’ll know that death to the ancient Sumerians meant unpleasantness for the rest of eternity. They feared the dead who “live in darkness, eat clay, and are clothed like birds with wings” and would eat the living if they escaped the Underworld.

In Maori culture in New Zealand, the bodies of the recently deceased needed to be brought back to their families immediately and rituals performed or the spirits might become angry and decide to bring more family members to the other side.

So, while there might be an evolutionary advantage to believing in the afterlife, it doesn’t mean that we necessarily believe in a Heaven filled with naked angels strumming on harps, but also that Hell could be programmed into our primordial belief systems and it’s that antediluvian angst that Phantasm excels at accessing. In the world of the film, there is no “happily ever after”, The Tall Man is coming from another dimension to enslave the souls of the Earth and the main characters have to figure out how to stop him.

But interestingly enough, Whitley Strieber’s sequel to his book Communion (who in my opinion has influenced our modern views ideas of aliens more than any other creator) was called Transformation, which came out in 1988, the same year as Phantasm II. The main idea of Transformation was that the aliens that he claimed to have been abducted by all his life in Communion, were here in a spiritual capacity and not just a scientific experiment (and I don’t know if that would have been a relief to South Park‘s Eric Cartman or not…)

But in Transformation, the aliens are here and visiting us to help recycle our souls, which starts blending two formerly very different strains of paranormal belief into one (albeit Mormonism and Scientology have been doing this for a longer period of time, but Transformation is really when I got my first taste of it.) This mixture of aliens and an inescapable afterlife of servitude is what makes Phantasm such an mindtrick and it was all brought to life in such effective terror by the performance of Angus Scrimm as The Tall Man. Thanks Lawrence Rory Guy, for the awe-inspiring personification of a perfectly horrifying, yet ancient, idea.