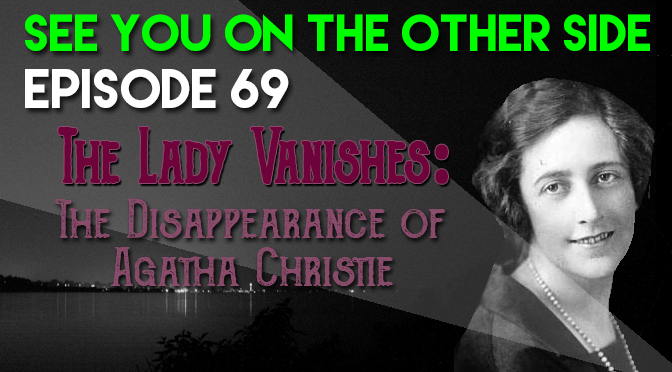 December 3rd marked the 89th anniversary of the Agatha Christie disappearance, where the most popular author on the planet and the person we can credit most with the development of what people think of as the modern mystery novel, went missing for eleven days. The author of And Then There Were None, The Mousetrap, and Murder on the Orient Express has thrilled readers with her fiction for nearly a century. But in 1926, Christie became the mystery, when she suddenly vanished with no explanation.

I’ve only read a few of her works, but I’ve seen a great deal of her adaptations. I used to love Mystery! when I was little because on Saturday nights it was usually on right before Doctor Who on the Milwaukee PBS station. Her disappearance was something that I remember reading about offhand and putting on the list of things that I should read about one day. Well, with the anniversary coming up, I figured it was an omen that that day was now.

So, let’s go back and talk about who Agatha Christie was in 1926. Born in a well-to-do family to an American father and English mother (who Christie believed had psychic powers!), Christie dreamed of being an opera singer before deciding on writing as a career. She married Royal Flying Corps officer and all-around World War I stallion, Archibald Christie on Christmas Eve in 1914 and they had a child (I accidentally say that she had two kids with him in the discussion, sorry about that!) Archie was instrumental in encouraging her to continue writing after she didn’t get any money from her first novel. Early in the 1920s, her writing career had taken off, but Archie was spending more and more time at the golf course than with his family.

Her mother had died early in 1926 and she moved back to her childhood home for a few months. The death and the lack of support from her husband left her psychologically fragile, like forgetting her own name when she was signing a check or bursting into tears when the car wouldn’t start. Fast forward to the last month of the year and Archie then decided to tell her that he was in love with someone else (a woman Nancy Neele that he worked and golfed with). So, yeah, 1926 was a bad year for the Dame.

On the morning of December 4th, 1926 her car was found abandoned in a chalk pit by a lake called Silent Pool (a place that inspired the death of one of her fictional characters) and she was nowhere to be found. Her identification and some clothes were inside the car, but otherwise there was no clues to point where she’d gone.

The search for Christie quickly became front page news. Even Sir Arthur Conan Doyle, spiritualist and Sherlock Holmes author, even took one of her gloves to a psychic medium to see if they could get some assistance from the spirit world in the search. And it certainly didn’t help matters that Archie spent the weekend with friends, seemingly more annoyed than concerned. And according to the press, that made him a suspect in her disappearance.

That part is a lot like Gone Girl, the Gillian Flynn novel that was insanely popular from a couple of years ago (and for good reason, it’s terrific), but we spoil the book and movie in this episode, so you’ve been warned. But just to sum up, the husband character in that novel becomes the media’s main suspect in the disappearance of his wife, which is a lot like what happened to Archibald Christie in real life. I’m not sure how much Flynn used the Agatha Christie disappearance as inspiration, but it certainly must have crossed her mind while writing.

So, the search goes on for eleven days until a saxophonist in a band playing at a spa called the Hydropathic Hotel in Harrogate, recognizes the author from the pictures in the newspaper and contacts the police to collect the hundred pound reward to help find her. Then a journalist gets there first and confronts her as Mrs. Christie, to which she responds but says she doesn’t remember what happened and how she got there.

And the whole time at the spa, she’d been partying, dancing the Charleston, telling everyone that she was a recently bereaved mother (something I’m sure there was a lot of in the UK after the First World War) and checking in under the name, Theresa Neele – using the surname of her husband’s mistress. So something is happening there.

In the meantime, the police and the media were giving her Hell about faking her disappearance, particularly because she had written to Harrods in London inquiring about a diamond ring she had lost the week before she disappeared while she was shopping. And she also put an ad in The Times of London letting people know that they could communicate to a Theresa Neele through a London post office box.

This is similar to what happened to a young woman named Audrey Seiler right here in Madison, Wisconsin (where we produce the show.) She disappeared from her apartment in March of 2004 and was found four days later. She told police that she had been abducted, but later there was a videotape from a store where she could be seen buying duct tape and other “fake your own kidnapping” supplies. And it was said that she did it all to just get the sympathy of her boyfriend back after the bloom had been coming off the rose of her relationship. It cost the city of Madison around $96,000 and she was given three years of probation and ordered to pay the city back $250 a month in restitution. She left Madison soon after and returned to Minnesota.

We were on tour of the East Coast and into Toronto at that point and her abduction was all over the news, because missing girls was huge on CNN at the time. So it was neat that everyone knew where Madison was because it was on their TV screens for several hours each evening, which made it look all the stupider when they found out it was just a stunt.

So, what was Agatha’s deal then? The first inclination was that it might be a publicity stunt to drum up sales for her books, but that’s kind of a stretch. You gotta really be in the deep end when it comes to sales if you’re going to fake your own disappearance for some press.

Other people believed her story of amnesia and that it might have been an actual “fugue state” where you forget who you are for a little while. I recalled a story I read in Vice a little while ago about a British woman who lost 15 years of her life overnight due to amnesia, so these things absolutely can happen. The entire second half of Lost Highway, which is a pretty great, if completely weird-even-for-him, David Lynch film, goes into the same territory.

When you go into a fugue state, which can often be brought on by trauma, you can change identities. It’s kind of like Dissociative Identity Disorder (better known as Multiple Personality Disorder) where you just become a different person for a little while. Walt uses it as an excuse when he’s kidnapped by Tuco early on in Breaking Bad (and that shouldn’t be spoilers, because honestly, you should have seen Breaking Bad by now, what are you living on the Moon?)

Writers use “fugue states” in movies and TV all the time, even my beloved Doctor Who uses it in the mostly silly Christmas special, “The Next Doctor”. And Doctor Who even had their own episode devoted to giving Mrs. Christie’s disappearance a more extraterrestrial explanation with “The Unicorn and The Wasp”. A movie called Agatha from the late 70s is another fun fictional account of what might have happened to her.

The thing is with fugue states and multiple personalities, how do you know if people are telling the truth. But I think it’s more likely to happen to people that are screwed up in a variety of ways, probably not someone who had it together for most of the time like Dame Agatha did. And it didn’t help that she was silent about the reasons for her disappearance for the rest of her life.

So, what do I think happened? She freaked out that her husband wanted to leave her and was doing it with a younger woman. It was life-altering heart-crushing news. She decided to run away for a little while to get an escape and then concocted something so the pain that she felt inside would be transferred to people looking for her and caring about what happened to her as well as getting a bit of revenge on the man that betrayed her. It might even have been Gone Girl-style where she wanted him to be implicated in her disappearance as punishment for his philandering, even if only for a little while.

While Agatha Christie was a wealthy modern woman, she also was someone who clung to some traditional values about marriage and family. When those values were shattered so shortly after the death of her mother, it might have made her crack as well.

This week’s song is dedicated to that woman who emerged from her car that night in December to run away from her fractured life. It’s called “Agatha” by Sunspot.

They found your car
by the lake
but you were gone
without a trace
And all the news they
showed your face
and everyone
called out your name.

And I heard them say

And I heard them say