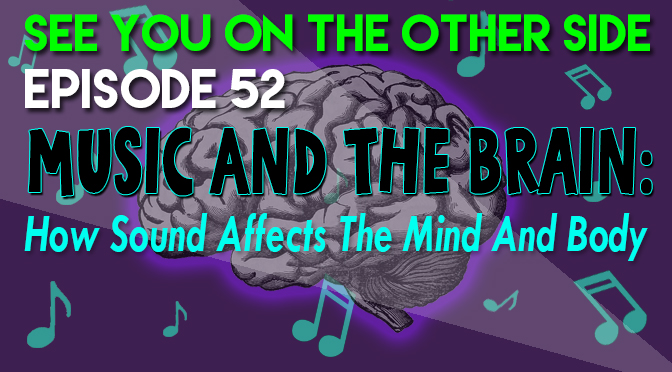 The episode starts with our trip to Bray Road near Delavan, Wisconsin which is where the legendary “Beast of Bray Road” was seen. We talked about the beast in Episode 51 – American Monsters: An Interview with Linda Godfrey and since we were in Delavan, Wisconsin performing with our band, Sunspot on Friday, we thought that this was our golden opportunity.

It was right around 10pm when we got there and it is a dark, dark place and it’s a pretty isolated road with only a few houses and surrounded by woods and cornfields.  There wasn’t a moon and it was super dark out. It was just the usual rural Wisconsin sounds of crickets, a couple of well-placed moos, and what sounded like a screaming bird (that was kinda scary). 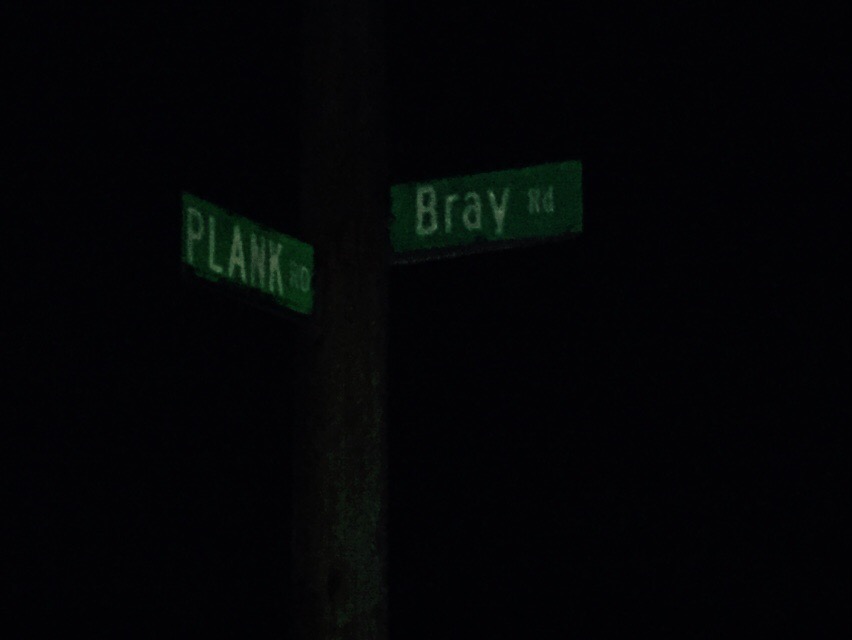 We took a stop at the intersection and wandered to the sign to get a picture. I saw some tail lights in the distance and I can see how someone might mistake them for the red glowing eyes of a wild beast, but really they were just tail lights. Either way, it was a fun little trip and it was nice to go “on location” after interviewing Linda less than a week beforehand.

So, this week’s topic however, is music and the brain and specifically, how music and sound can actually have a physical effect on you. We start the conversation with the obvious, how music can assist you with athletic performance. Wendy talks about how she likes to listen to techno while she runs and I agree (my man, Deekron – The Fitness DJ has gotten me through plenty of runs!) But then we remember Jazzercise and if you don’t know what you’re talking about, then this little piece of the 80s is gonna hit you like a runaway train…

There’s research that shows music can enhance mood, but I think we all kind of believe in that. After all, we’re always listening to certain songs to increase our athletic performance or when we want to get really pumped up about something. But also that people who are frustrated in life tend to find music that amplifies their frustration. I had a roommate in my last year of college who was an ex-convict that hated his job but he loved Limp Bizkit. Coincidence? I think not!

I recalled something from the late 90s called “The Mozart Effect”, which was research that showed listening to classical music could make you smarter and the reason that it was in the news was because Georgia governor, Zell Miller, thought it’d be a good idea to actually put an item in the state budget for giving free classical music CDs to infants – yeah, that was a thing. But the research shows that listening to classical music right before taking a standard IQ test can actually help with some of the questions. So, while that was ridiculous, they might be onto something.

We also talk about the healing effects of music and how it has been shown to help people control pain, stimulate antibody production, assist with the release of endorphins, and the research shows that music helps slow breathing and heartbeat. In fact, it doesn’t matter what the genre of music is (unless you’re a picky bastard like me), it’s the tempo that determines how fast your breathing and heartbeat adapts, it could be any genre from heavy metal to polka, it’s the tempo that counts.

They’re currently working on something called vibroacoustic therapy as well, to help people with Parkinson’s Disease, Fibromyalgia, and depression. They liken the therapy to sitting on the best studio subwoofer ever (but all I could think about was the subwoofer scene from Howard Stern’s movie, Private Parts, which I’m not linking to here because while it’s pretty funny, it’s definitely NSFW!)

One of the most powerful viral videos of the past couple of years was watching an elderly Alzheimer’s video listening to music of his youth and going from virtually comatose to alive and excited. It shows that music can stimulate brains that we can’t reach through speech and even medication. It was a beautiful thing to see and they even made a movie about the phenomena called Alive Inside about research into using music to help Alzheimer’s patients.

While music can be used as medicine, it doesn’t even have tom be melody to affect the brain, simple frequencies can certainly do it as well.  For example, binaural beats occur when you play two slightly different frequencies at the same time (one into each ear) and the brain actually processes it as like one sound and it produces a strobing effect. It was discovered back in the mid-19th Century but serious research wasn’t really done on them until the 1970s.  Now, some people say that they can simulate the effects of drugs, help people diet or quit smoking, assist in memorization, etc… but the evidence there is a little flimsy.

A few years  back teenagers were said to be getting “high” on listening to binaural beats and they’d post their exploits online, it was all pretty silly, but one thing we know for sure is that binaural beats can help with something called “brainwave entrainment”. That’s when you listen to a stimulus with a frequency, the brainwaves tend to go towards that frequency themselves so it helps put people’s minds into different states from Gamma wave production (like when we’re active and doing things) all the way down to Delta (the deepest sleep and meditation, where you forget your body). Binaural beats can help induce those states (and more on that when we get to our song.)

And speaking of brainwaves the Netflix/Wachowski (and J. Michael Straczynski from Babylon 5 and The Real Ghostbusters!) TV show, Sense8, debuted this summer. It’s about people across the globe telepathically connected and they made a song out of the frequencies produced by the brainwaves of eight people who had binge watched the program. It’s not the catchiest song in the world, but it’s still pretty sweet!

And for the coup de grace for this episode, Wendy reminded me of the greatest pop culture example of music affecting the brain called The Brown Note, where the characters discovered a certain frequency that could make people involuntarily poop their pants. I can’t believe I forgot about that one, it’s a classic!

This week’s song is an ambient track with binaural beats, every 8 measures of the song moves the binaural beats frequencies to try and entrain your brain from Gamma (>40 HZ), Beta (13-39 Hz), Alpha (7-13 Hz), Theta (4-7 Hz), and all the way down to Delta (<3 Hz), and then slowly back out. Take a listen and let us know what you think!