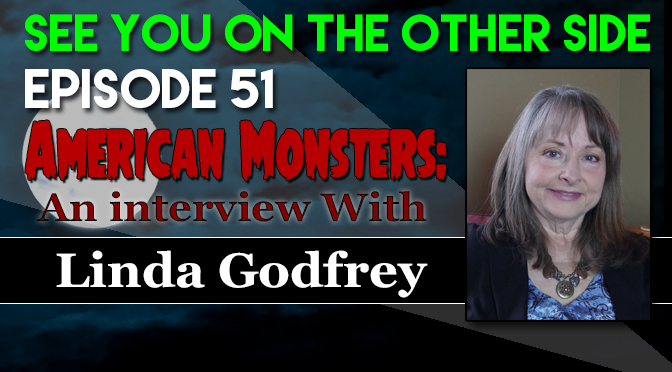 With books about Dogmen, werewolves, Bigfoot, skin changers, and the rest of the stable of American monsters, Linda Godfrey took an unlikely route into becoming one of the nation’s pre-eminent researchers into strange animals. This week, I interview Linda about how her journey took her from being a reporter for a small-town Wisconsin newspaper to becoming a chronicler of cryptozoology with appearances on Sightings (man, I miss that show all the time), Coast to Coast AM, Monster Quest, The New In Search Of… National Public Radio, and many more shows.

Linda started out as an artist and was looking to draw cartoons for a syndication deal when she offered her drawings to her local newspaper in Elkhorn, Wisconsin, the Walworth County Week. Those cartoons turned into articles soon enough and after a short while, she found herself as a local reporter.

While there had been reports of a werewolf-like creature sighted by drivers on Bray Road near Delavan, Wisconsin (where Wendy and my band, Sunspot, just happens to be playing this Friday!) in the late 80s (with some perhaps related reports stretching back to 1936), it was when the reports came to the attention of Linda after Christmas in 1991 that the story took off and her articles started getting at first attention of Milwaukee news, but then even international news agencies picked up on it and the story exploded. As Linda was the journalist who launched the story, she became the face of it.

And after becoming that face of the Beast of Bray Road, it led to people sending Linda other weird reports of sightings of mysterious creatures, not just in Wisconsin, but from all around the country. She continued to work at the paper and also developed her first book, The Poison Widow, about a murderess who killed her husband and then tried to kill her four children in Whitewater, Wisconsin on St. Patrick’s Day in 1922.

After the release of that book, she wrote the work that she’s best known for, The Beast of Bray Road: Trailing Wisconsin’s Werewolf. Linda elaborates for us the different kinds of beasts that she speculates are out there, from dogs that can walk on hind legs, to skin changers and shamanism, as well as the difference between these creatures and the clinical form of lycanthropy (a psychological condition where you actually believe that you’re turning into a wolf, but you’re really just running around naked and howling at things.)

We even talk about the movie The Beast of Bray Road, a b-movie that  came out in 2005, but Linda had zero participation in. However, it looks like it was written by a guy from Milwaukee, so at least it has a local connection. However, when they say “Based on a  true story”, well, that’s stretching it a lot.

Linda continued to release books throughout the 2000s (including the for-awhile-ubiquitous Weird Wisconsin and her own fantasy novel set in our little paradise of Madison, Wisconsin called God Johnson.)

But even if she delves into fantasy and other kinds of high strangeness, she can’t shake cryptids (and really, who can?) American Monsters her latest book has her leaving the Midwest and going nationwide in the lore of strange beasts. Of course, the most famous American beast is Bigfoot, and Linda gives us the skinny of her own encounter with a maybe Sasquatch right in the Kettle Moraine forest in 2012.

And finally we talk in more detail about the Milwaukee Lion. That’s right, we’re back to discussing the beast that’s been terrorizing the city for a couple of weeks now. I know last week, I told Wendy that I thought it was all hooey, but after my initial disbelief, I come around to grudgingly believing in it and Linda schools me as to why I should. First of all, there have been mountain lions spotted in Wisconsin several times and Linda’s husband almost got mauled by one not too long ago, just in the Kettle Moraine, not too far outside of Milwaukee. Plus there’s been sightings in Waukesha and Chicago in the past few years. It was fun to theorize with one of America’s strange beast experts on where the Milwaukee Lion might be headed next!

This week’s song is “American Monsters” by Sunspot.

While we were wondering what’s under the bed,
there’s been something growing we should dread,
and it’s getting bigger all the time.
Hairier than Bigfoot’s paw,
scarier than Wolfman’s claw,
there’s pitchforks out looking for a Frankenstein.

So scream your lungs out,
and look for a way out,

they’ll set out your insides out for a little bait.
A chilling effect,
when lives are wrecked,
by a mouth starving for something to hate.

Be careful what you say,
be careful not to wake,
the outrage of a beast with a million heads.
These American Monsters will eat you whole,
take your life from your control,
and won’t be satisfied until the trolls are fed.

Someone’s listening,
so say the right thing,
but the right thing changes every day.
The mob always wins,
Needles and pins,
You better watch what you say.

So scream your lungs out,
and look for a way out,
they’ll set out your insides out for a little bait.
A chilling effect,
when lives are wrecked,
by a mouth starving for something to hate.

4 thoughts on “51 – American Monsters: An Interview With Linda Godfrey”