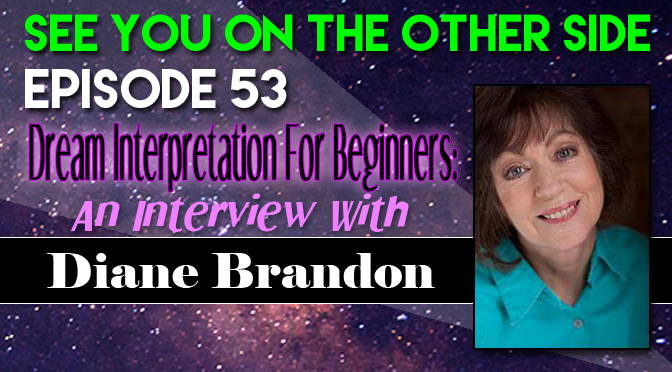 Dreams, man. We all have them, all the time. Sometimes they’re terrifying, sometimes they’re fun, sometimes they’re just downright nasty (and not always in a bad way)… But do they mean anything? Is it just the random firings of synapses that are going through the motions as we fall asleep? A shoebox full of memories, fantasies, and mistakes that gets shaken up in the middle of the night and put on display to entertain the sleeping mind?

How about messages from our subconscious bubbling up to the top, telling us things that we normally refuse to let ourselves think? Desires sometimes best left unspoken that only express themselves in the safe private haven of the dream world.

Or is it a place where people can receive messages from the non-physical. Conversations with spiritual entities, sharing adventures with friends, memories of past lives that might only appear in your dreams.

When I interviewed Diane Brandon for this particular episode, it was because we were looking to do an episode of interpretations of some of the most popular dreams. After all, she is the author of Dream Interpretation for Beginners so we thought she’d be the perfect person to help you guys begin to make sense out of the craziness of what happens when you dream. Interpreting one’s dreams is one of the foundations of Freudian psychoanalysis and we talk a little about that in the interview, but beyond just learning to understand yourself better, Diane believes that dreams can be much more than just the internal workings of one’s own mind.

She talks of dreams as the conduit to other planes of existence, can help facilitate an out-of-body experience and leave the physical body behind, that you can communicate with your friends in dreams (indeed dream telepathy was even suggested by the good Doctor Freud himself once ), and that basically it’s a place where the paranormal can and does happen.

Diane currently lives in Durham, North Carolina, (the home of Duke University which is the home of the Rhine Research Center, which is probably the most famous parapsychological laboratory of all time) and she began her exploration of the dream world when she was in college and she began sharing (not just discussing but literally sharing) dreams with her roommate. That led her on the path to work as an integrated intuitive counselor, which, okay, what does that mean?

Intuitive counselors help people understand themselves better. Just think about all the times your body was telling you something but your mind wasn’t listening. Ever have a job you hated and would get sick a lot, not just the kind of sickness you get after partying too hard, but you would get physically ill more often than usual. But when you went on to do some other kind of work you just discovered that you weren’t getting sick anymore? Or you might find that your body acting literally allergic to a boyfriend or girlfriend that isn’t right for you. Sometimes you might be angry about something and then you eat something and you start being less angry about it? Sounds like you? Well, that’s what an intuitive counselor helps you deduce, things that your body or subconscious might be telling you (often loudly and clearly) but you’re not getting the message.

So that’s when we start talking about how you can start analyzing your dreams and trying to learn more about yourself from what messages you’re getting sent into the dream world.

Diane stresses how important it is to get into dream interpretation with intention. If you aren’t really that interested in doing it, your unconscious will know and will act accordingly, not helping you with remembering your dreams well enough to document them. Also, a voice recorder is better than a dream journal, number one because you’re not exposing yourself to light in the middle of the night, but also because it’s faster to document the dream. The more time you wait while you’re frantically writing the words down, the more of your dream disappears.

Diane stresses the significance of getting a decent amount of sleep as well as a straightforward approach to nightmares. If you have nightmares all the time, you have some unresolved issue in your life that you have to deal with. Are you watching too many horror movies that maybe you’re not mentally prepared for? Are you scared of something, are you being abused? Having nightmares constantly means that you have some mental business to take care of.

We go through several popular dreams and what they might mean from cheating to flying to nightmares, to being naked in public, teeth falling out, and taking that test unprepared, and more. So, what can they mean for you? Take a listen to the podcast and find out and get a headstart on your dream interpretation. And if you are interested in taking it to the next level, check out Diane’s book, Dream Interpretation for Beginners!

This week’s song was inspired by the discussion of the dream world being a place where spirits can meet as well as the concept of the Aboriginal Dreamtime (something that will definitely get its own topic soon!) Here is “Dreamtime” by Sunspot.

3 thoughts on “53 – Dream Interpretation For Beginners: An Interview With Diane Brandon”