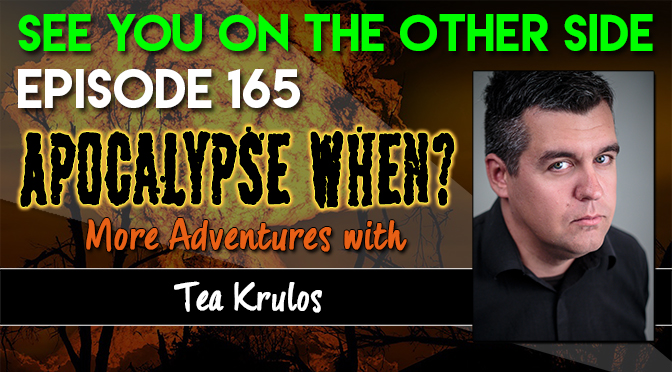 Freelance writer and adventurer Tea Krulos is back this week with Wendy, Allison, and I to give us an update to what he’s been up to over the past year. In the past, Tea has written about Monster Hunters and Real-Life Super Heroes and now we catch up with him as he researches his next book, The End.

The End is all about what you think. That’s right, we’re talking the end of the world, from doomsday preppers to climate scientists. Tea’s been having some wild adventures this Summer as he catches us up with his trips to ZombieCon, which is the worldwide meetup of the Zombie Squad, who are not exactly what you think they might be… while they use the symbolism of being ready for a zombie outbreak, they know it’s ridiculous. Sorry Charlie, George Romero-style Walking Dead zombies just ain’t real and aren’t really possible.

But there’s all kinds of emergencies, from hurricanes to floods to a terrorist strike, that could lead to a similar situation as a zombie apocalypse. The power goes out, cell phone service is down, it’s dangerous to be out at night… you don’t need a horde of the undead for that to happen. The Zombie Squad teaches disaster preparedness by using a zombie nightmare as the example, it’s a fun way to handle a serious topic.

We get the real skinny on Tea’s trip to the Doomsday Luxury Condos in Kansas and hear all about what happens in that giant 14-story abandoned missile silo that might eventually serve as something like Fiddler’s Green from Land Of The Dead, a place where people can enjoy luxury comforts even if the world is burning around them. It sounds amazing and Tea got to take the grand tour.

Finally, we hear about his trip to Wasteland Weekend which bills itself as the World’s Largest Post-Apocalyptic Festival. And it sounds like a real blast (a Master Blaster!) to hang out with people living their Mad Max fantasies and partying like they’re in the video for “California Love”.

Finally, we get a preview of the Milwaukee Paranormal Conference 2017, which is shaping up to be an amazing weekend full of awesome events, including a performance by Wendy and I at the Jabberwocky’s Ball on Saturday night, haunted history tours in Waukesha and Milwaukee, and recent guest David Parr doing a seance magic show at the haunted Brumder Mansion on midnight Friday the 13th!

Two things not to miss on Sunday’s event…

Our beloved Allison Jornlin is doing a new presentation on Milwaukee Forteana. This time she’s rediscovering the work of some of the area’s greatest paranormal researchers and she’ll be bringing that to life 10am on Sunday.

The Haunted Road Trip panel hosted by yours truly at 1pm, that’s going to be discussing awesome places that you can goto in Wisconsin to do some legend tripping for a day (or night)trip! That’s 1pm on Sunday and it’s in the bar, so we can knock one back.

Tobias from The Singular Fortean Society will be going after the Chicago Mothman at 3pm. There’s tons of new information out there about the sightings and our very own Allison has been hunting that sneaky bastard down all over the Windy City. If you want a quick refresher, just take a listen here!

One of the commonalities about all these people preparing for the end of the world, is that they’re expecting something to happen. Apocalypticism has been with us for a long time. The expectation that some huge defining moment is going to happen in our lifetime, from Charles Manson anticipating a black versus white race war to Coast To Coast AM-fueled Y2K fever, it’s a desire that some great thing will happen in our lifetimes where we can prove ourselves, where we can test our mettle. It’s the ultimate rite of passage, can you survive the end of your species?

This Sunspot song is about that feeling, where you’re waiting for a moment to change your life, like when you hear about your grandfather and World War 2 or the Great Depression. It’s wanting to be a part of history that can change the world and therefore it changes your life. Well, sometimes you just gotta do it for yourself, like in this song off our second album, “Don’t Tell Me I Missed The War”.

All my heroes are on MTV,
they’re on a movie screen,
and they like to eat Wheaties.
And I don’t trust the President,
and hate the government,
and I’ve been waiting all my life,
for one defining moment.

Tell me what to do with,
all this aggression I feel,
because self-repression just leads,
to more depression.
And I don’t want to be another,
wheel in human traffic,
I want to prove myself,
but I am just a demographic.

All my heroes have been,
programmed for me,
so they could guarantee
my complacency.
And I still don’t trust the government,
even though it pays my rent.
And I’m still waiting for that,
one defining moment.