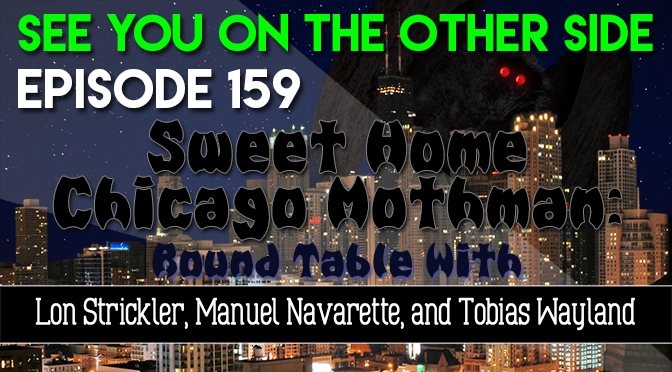 The Midwest is abuzz this Summer with stories of winged humanoid creatures flying over Chicagoland. Tall dark creatures with red glowing eyes have been spotted all over the city with dozens of sightings this year alone.

Now Lon has been collecting these stories, Manuel Navarette from UFO Clearinghouse has been writing up the reports and investigating each site, our friend Tobias Wayland from the Singular Fortean has been following the sightings closely and looking for ties to other cryptid and paranormal cases, and of course, our own Allison Jornlin from Milwaukee Ghosts has been visiting all of the sites and walking through them for her Haunted Road Trip YouTube channel.

The Chicago Mothman is the big paranormal story of the summer and we knew it was time to get a round table together of these researchers to dive into the best sightings, the methodology of investigation, and the similarities and differences from the 1966 and 1967 Point Pleasant, West Virginia Mothman sightings that was a harbinger of disaster for the town.

And unlike this summer’s King Arthur movie, our Round Table does NOT disappoint (zing!) Not only does Lon give us the skinny on Remote Viewing Experiments he’s been conducting, but Manuel tells us why he thinks that there is a cover-up from the local government and media.

Wendy and I also shout out to all the new friends we made at the Michigan Paracon over the weekend in Sault Ste. Marie, we headed north to the Upper Peninsula to party with some awesome Michiganders and meet up with former podcast guests like Week In Weird‘s Greg and Dana Newkirk, Haunt Investigators of Michigan, Ghost Adventures’ Jeff Belanger, and Ghost Hunting 2.0‘s Chris Bores.

Wendy, Allison, and I also sported some sweet new See You On The Other Side t-shirts with a special new design made by Brent Simpson, and here you can see Allison modeling the shirt with some of our friends from the Paracon!

And you can check out one of those shirts for yourself on Amazon right here!

Now for an episode like this, you know we just couldn’t resist working on a song by the man who sold his soul at the Crossroads himself, Robert Johnson (who we covered in detail in our first episode, “Making A Deal With The Devil: The Musicians Who Sold Their Souls To Satan”. ) Everyone from B.B. King to The Blues Brothers have done their versions of this song, and we thought we’d leave our mark on it. It’s also the last song that Stevie Ray Vaughan every played, at Alpine Valley Music Theatre in Wisconsin in 1990. It was an epic jam with Stevie, Eric Clapton,  Buddy Guy, Jimmie Vaughan, and Robert Cray – August 25th, 1990. So we also thought it was appropriate because this wewas the 27th anniversary of his death. And here’s our little blues jam, Sunspot with “Sweet Home Chicago Mothman”.

On Roosevelt and 59th
perched right on the light,
Flying off to the air
after flapping its wings twice,

At Humboldt it’s an owl,
they call it Lechuza,
eyes of glowing red,
and they’re staring right through ya

Oh Baby,
Honey don’t you wanna go
to the land of the were-owl
Sweet Home Chicago.