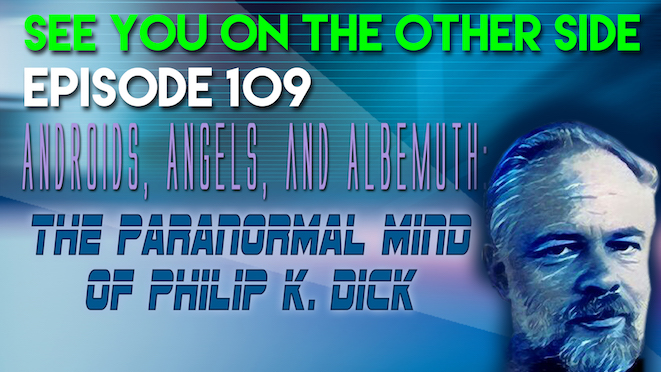 Science fiction is the most popular form of modern entertainment.  Every summer we’re treated to an alien invasion movie or the latest comic book adventure and even the biggest show on American television glamorizes sci-fi “nerds” (even if The Big Bang Theory routinely get the details wrong for those of us paying attention.) Such was not the cultural landscape of the mid-Twentieth Century.

Philip K. Dick (the K stands for Kindred, which you players of Vampire: The Masquerade or C. Thomas Howell fans should all appreciate!) has been one of Hollywood’s go-to inspirations for films for over thirty years now. Blade Runner, Total Recall, A Scanner Darkly, Screamers, Minority Report, The Adjustment Bureau, Paycheck, The Man In The High Castle, and many more. That’s right, he’s influential enough that both Matt Damon and Ben Affleck have been in films inspired by his novels!

But all kidding aside, if he were alive today, he’d be a wealthy man. But science fiction wasn’t really part of mainstream literature in the 1950s and 60s, and Dick embarked on a strange life’s journey, full of broken marriages (he was married five times), drug addiction, bouts of poverty, and a religious experience that he wrote about in a half million words in his journal. His wondrous imagination that gave his readers so much to think about, had plenty of issues on its own.

Born in Chicago in 1928, Philip K. Dick had a twin sister Jane that died only a few weeks after birth. While he was a child, his family moved to the San Francisco Bay and he was in the same graduating class as Ursula K. LeGuin (Wizard of Earthsea, yeah!), he went to the University of California at Berkeley for awhile and published his first science fiction story “Beyond Lies the Wub“ in 1952.

He was often desperate even while being hailed as a science-fiction genius. He wrote mainstream novels in the 1950s that all went unpublished in his lifetime except for one. His story “Impostor” was adapted for British Television in 1962 (and the screenplay was adapted by none other than Terry Nation, the creator of Doctor Who‘s Daleks) and his novel The Man In The High Castle even won the Hugo for Best Novel in 1963, but that still couldn’t keep him afloat.

He had drug issues, even in 1971, turning his home into a drug den after a messy divorce. He was into amphetamines and sedatives and different kinds of pills, even once trying to kill himself in 1972 with a sedative overdose after a new lover left him. He chronicles a lot of this fictionally in the book, A Scanner Darkly.

Dick’s writing dealt with alternate realities, paranoia, strange memories, and what it means to be human.  “In my writing I even question the universe; I wonder out loud if it is real, and I wonder out loud if all of us are real.” He said, “my preoccupation with these pluroform pseudo-worlds” is “now I think I understand; what I was sensing was the manifold of partially actualized realities lying tangent to what evidently is the most actualized one, the one which the majority of us, by consensus gentium, agree on.”

Hey now, what does any of that mean? Take the red pill, Neo. Dick was saying that we’re living in the reality that most of us agree on and that his works have been a peek into the possibilities of other realities. Alright, now we’re talking sci-fi, everybody!

In 1974, Dick was recovering from a dental procedure when he ordered some pain medication and the nurse brought it over. She showed up and was wearing one of those Jesus Fish symbols around her neck and a beam came from her pendant and hit him in the head, causing him to have visions of being a persecuted Christian in Roman times. He thinks something entered his mind that day.

In letters, the author told his friends that some kind of entity was keeping “violent phosphene activity”. Phosphene is Greek for seeing light without using the “eye” because he was seeing things in his mind.

“It did not seem bound by either time or space … within my head it communicated with me in the form of a computer-like or Al-system-like voice, quite different from any human voice, neither male nor female, and a very beautiful sound it was, the most beautiful sound I ever heard.”

He added that he thought it was “an ionized, atmospheric, electrical life form able to travel through time and space at will … through camouflage (it) prevents us from seeing it. And he described the aftermath of his initial experience: “during the days following … the imposition – that is the right word – the imposition of another human personality unto mine produced startling modifications in my behavior.” He came to the conclusion that he experienced “not added perceptual faculties but restored perceptual faculties … we are imprisoned by blunted faculties: the very blunting itself makes us unaware that we are deformed.”

He later described the experience to interviewer Charles Platt as “an invasion of my mind by a transcendentally rational mind. It was almost as if I had been insane all of my life and suddenly I had become sane.”

The experience profoundly affected him and it made up the core of his book VALIS. The title is an acronym for Vast Active Living Intelligence System.

“I was a spectator,” said Dick. This mind, which Dick characterized as female, fired his agent, tracked down editors who were late sending checks and modified his diet.

When he had the Roman experience, interestingly enough it wasn’t just that he was in Ancient Rome and existed among the persecuted Christians, but he described it as a “Dreamtime”, an Age of Heroes where great deeds took place.

And while listening to “Strawberry Fields” by The Beatles, it also revealed to him that his young son had an undiagnosed birth defect that was potentially fatal. And the revelation proved to be true and a doctor was able to save his child’s life!

He talks of the spirit as thinking in non-verbal thoughts, “It thought pure concepts without words. But it knew with ratiocination. It transferred to my mind concepts that in seven years of trying to articulate them in words, I’ve only now been able to reduce them.”

And going back to the symbol that started it all, had an extended visitation where he bought a fish sign with Greek letters on it (just like the Christian symbol we see on the backs of cars, in fact Christians used to use this as a secret kind of symbolism so that they could know each other…)

And this extended visitation involved a Greco-Roman spirit that would get confused by Modern life and wouldn’t quite understand what was going on. Dick said that he could pick up the other’s thoughts while he was waking up and falling asleep and the Greco-Roman person felt that there was someone inside his head as well. Dick couldn’t drive because the spirit couldn’t understand the pedals of a car.

He thought it might be the Prophet Elijah, because it originally happened during Passover. Elijah is a character in the Old Testament Book of Kings who challenged the King of Israel when the King’s wife, Jezebel, spurned her husband on to abandon the worship of Yahweh and start worshipping Baal, an ancient God of Thunder and rain.

Elijah sets up a match between the power of Yahweh and the power of Baal to see whose deity is greater. Of course, the Hebrew God windmill and Elijah is later lifted up to Heaven in a chariot pulled by flaming horses. Pretty sweet.

In Jewish ceremonies, they’ll often leave a chair out for Elijah, particularly at the Passover Seder and circumcision ceremonies (there’s a great Saturday Night Live skit with Jerry Seinfeld showing up as Elijah in person at a Passover Seder about this).

Christians sometimes think of John The Baptist as a reincarnation of Elijah The Prophet and this is who Dick thought he was possessed by the spirit of, because his spirit was more concerned with being persecuted by the Romans as a secret Christian and that’s what happened to John The Baptist when he was beheaded.

When Elijah had left him, Dick had thoughts of suicide, even though he was still visited by the A.I. Voice every once in awhile. He would sit late at night and write down his thoughts in a journal which ended up at over a half a million words and selections were published in 2011 as The Exegesis of Philip K. Dick. He even thought that he could figure out the Second Coming of Jesus in some of his last journal entries. In addition to his journal, his stories VALIS, Radio Free Albemuth, The Divine Invasion, The Transmigration of Timothy Archer, his final novel, the uncompleted The Owl in Daylight all deal with this strange paranormal experience.

In this episode we also interview Dan Abella from the Philip K. Dick Science Fiction Film Festival! Dan is a filmmaker who founded the festival to honor the influence the author had on modern science fiction and also to highlight new filmmakers coming up.  You can find some of the trailers to the awesome films playing at the festival right here.

There’s a European branch of the festival and they’re celebrating October 14th in Cologne, Germany as well as the 22nd in Lille France. For the statesiders, they’ve announced the dates for the 2017 festival as well, check out this snazzy trailer and check out if you’re in NYC or a sci-fi filmmaker yourself!

At the end of the episode we bring on friend of the show and paranormal author, Tea Krulos, to discuss this year’s Milwaukee Paranormal Conference. Coming up October 15th and 16th in Milwaukee, Wisconsin, it’s going to be a doozy and we’re happy to be a big part of it!

For this week’s song, we decided to take some inspiration from the most famous of film soundtracks of a Philip K. Dick, Blade Runner, which was composed by the awesome synth-meister, Tangelos. We even snuck in some dialogue from Blade Runner, Minority Report, and A Scanner Darkly (we’re saving Total Recall for its own superset jam one of these days!) Here’s us shamelessly aping the beautiful soundtrack work of Vangelis with “The Tannhauser Gate”.