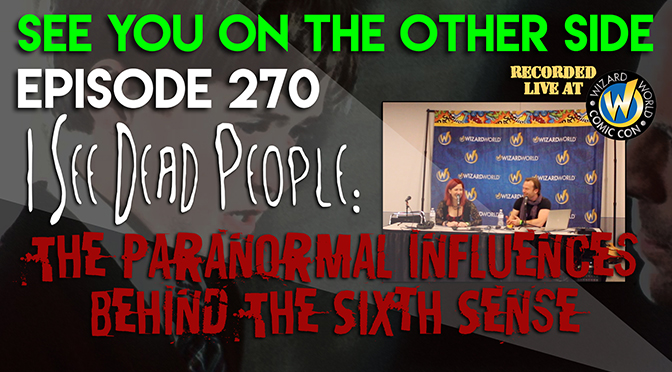 We’re back live from Wizard World Madison 2019 where we celebrate the 20th anniversary of one of the scariest movies of the 1990s, The Sixth Sense. A story about a boy who is visited by the spirits of the dead and the child psychologist that is trying to help him, it was the most financially successful horror film of all time until it was finally surpassed by 2017’s It: Chapter One. The movie turned child actor Haley Joel Osment into a star and it skyrocketed the career of its writer-director, M. Night Shyamalan, who became particularly known for his use of Philadelphia as a location and a penchant for Twilight Zone-style twists.

Huge THANKS to everyone who attended the live recording of Episode 270 today at @wizardworld @comic_con Madison! #wizardworldmadison #livepodcast

I was 22 when I saw the movie the first time and I don’t think I’ve ever been as scared in the theater as I was coming home from that film. I was walking with my girlfriend at the time up a dark staircase into my apartment and we were convinced that when we got to the end of the stairs and unlocked the door there was going to be a dead person behind it.

Re-watching it after twenty years, it’s at first most shocking to see Bruce Willis’ gorgeous hair or how skinny Donnie from the New Kids On The Block looks, but then you start seeing all of the clues that Bruce Willis’ character was dead the whole time and it feels so obvious, which why it was such a great trick the first time around.

But while The Sixth Sense might have been a completely fictional film, it doesn’t mean that a lot of the concepts in the movie aren’t taken from real-life hauntings and paranormal experiences and here’s what we talk about in this episode:

So, for the song this week we reached back into the archives for a track that we released not too long after The Sixth Sense came out. We thought that the chorus fit perfectly for this film where a child finally finds someone that believes in him and can stop being afraid of the ghosts that surround him. Here’s our old-school Sunspot song, “Flower-Child”.

Seeds of irresponsibility,
and a selfish kind of love,
birth the flower-child,

Neglected with the grey sky,
Beaten with the drought,
Treated as immaterial grass,
Cut down and shut out.

Will you ever bloom?

Don’t cry child of darkness,
The sky will open up to dawn.
The life-giving rains,
will wash your flood of tears away.