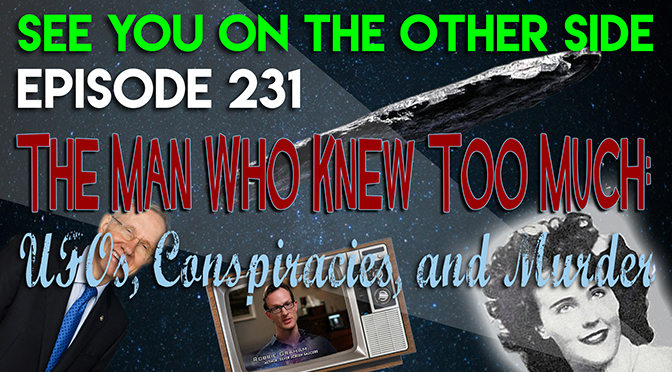 This week, there was a plethora of exciting UFO news (well, probably as exciting as we’re going to get until they finally land in our backyard) so we wanted to bring back one of our favorite guests, [Robbie Graham]. Robbie authored the fascinating and insightful book, Silver Screen Saucers as well as editing UFOs: Reframing The Debate, which is one of the most comprehensive looks at the subject of the last decade. Wendy and I talked with Robbie and Scott Markus from WhatsYourGhostStory.com joins us again for the discussion.

Starting out, we had to talk to Robbie about what it was like being on the History Channel juggernaut, Ancient Aliens! He was on the latest episode and he told us what it was like being brought into the study of a millionaire’s home (to make it look a little more intellectual) as well as being remotely directed in London over the Internet from Los Angeles. 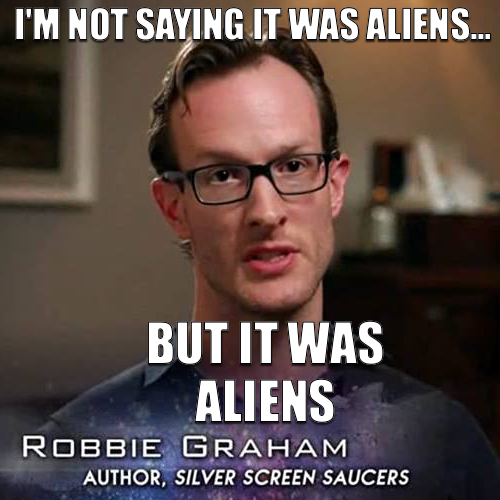 But just in the news this week, we had to discuss the new article about former Nevada senator Harry Reid coming out of retirement to lobby for more investigation into military reports of UFOs. Roll Call is not your normal UFO publication, it’s a political blog, so it’s always nice to see something weird in there. But why does Harry Reid care so much and why now? The best quote of the entire article is when he talks about Area 51.

But that brings up a bigger point, the existence of extraterrestrials is in the news more than ever. Since the New York Times article in 2017, aliens have snuck more and more in the news, from the latest fast radio bursts from space to the strange Rama-like space objet Oumuamua. And the go-to guy for astronomer credibility seems to be Harvard Professor, Avi Loeb. Now this guy is no slouch when it comes to academic credentials, but he sure is talking about aliens a lot. Is that because they’re getting us ready for disclosure?!

More likely, they’re just in it for the clicks. Those stories get shared more than any other and in a quickly shrinking media landscape, views mean money.

But another story that came out this week that I was particularly interested in was the official pronouncement this last week that conspiracy theorist Max Spiers who passed away in Poland mysteriously in 2016, actually died of a drug overdose.

It was a tragic end for a young guy (well, kinda young, I would be less than a month older than him, so it hits home for me) and the salacious news stories were filled with tales of cryptic messages sent to his mother and girlfriend in the UK as well as descriptions of him vomiting black bile before expiring. It didn’t help that his friends were telling people that extraterrestrials were mind controlling his behavior. I’m all for a good conspiracy theory and I fully understand that our government isn’t afraid to assassinate people but was a guy who talked about Nazi bases on the moon really getting too close to the truth?

Fascinatingly, that leads to a story from Robbie about how he once was paranoid about his phones being bugged and that he might have been being watched by the CIA while he was investigating another mysterious death, that of Hollywood screenwriter, Gary Devore. First of all, Devore wrote Timecop, the greatest of all Jean-Claude Van Damme films, so we all owe him at least a tiny bit of gratitude for that.

But in the mid-90s, Devore was working on a screenplay about the 1989 U.S. Invasion of Panama. That’s the one that was ordered by former CIA director, George H.W. Bush to capture former CIA operative Manuel Noriega.  My favorite part of the whole invasion (if one can have a favorite part of something that killed 23 US soldiers, 150 Panamanian soldiers, and over 500 Panamanian civilians) is that the U.S. military famously played “We’re Not Gonna Take It” by Twisted Sister at an earsplitting volume outside the Vatican Embassy, where Noriega had holed up after being driven from the Capitol.

Could Dee Snider have been in the CIA as well?

While Devore disappeared in 1997, he was on his way to deliver a copy of his latest script, the one about the “real reason” for the  Panama invasion. He never made it and a year later they found his Ford Explorer at the bottom of a California aqueduct. His body was there, but strangely his hands and the script were both missing.

Robbie became obsessed with the case and along with his colleague, Dr. Matthew Alford, they authored an article in The Guardian newspaper talking about Hollywood and the CIA and specifically talking about Gary Devore. Was Robbie getting too close to the truth? Well, in 2012, CIA operative Chase Brandon, who knew Devore well  because he was the CIA liaison to Hollywood, wrote a book called The Cryptos Conundrum. It’s supposedly fiction, but he makes a lot of claims (particularly about Roswell) and in one of the  “fictional scenarios” makes up an investigative journalist who starts exposing too many of the CIA’s plans and then mysteriously suffers a fatal heart attack. The name of this fictional journalist? Robert Graham.

THAT’S $%^ING NUTS. You can read the passages right here in the Google Book version of The Cryptos Conundrum. It’s not really very subtle.

Alford went on to make a documentary about the case in 2014 called The Writer With No Hands.

And speaking of Hollywood, Scott’s favorite story this week is the upcoming 61st anniversary of the Black Dahlia murder, where poor Elizabeth Short was found naked, mutilated and cut in half. It became one of Tinseltown’s most famous and shocking unsolved cases. Los Angeles homicide detective Steve Hodel believes that the killer was his own father(!), Dr. George Hodel, and the new TNT series I Am The Night, will be based on Hodel’s theories. Steve Hodel has also implied that his father was the Zodiac Killer. Happy Father’s Day, yikes!

For this week’s song, we were thinking about the tragedy of Max Spiers’ death and also Robbie’s own story of possibly being surveilled by an intelligence agency while investigating a cover-up. Whether or not you believe in conspiracy theories, from Q Anon to secret supersoldiers, our intelligence agencies wield a scary amount of unchecked power. While a majority of their actions might be in the service of protecting us, is the truth worth getting in their crosshairs?

You wear the truth like a tattoo
You look over your shoulder is there someone right behind you?

Walking too close to the Left Hand Path
Living with a target on your back.

Just like in Catch-22
Just cuz you’re paranoid don’t mean they’re not out for you.

Just what will you give up for the truth?
Even if it ends up killing you.

One thought on “231 – The Man Who Knew Too Much: UFOs, Conspiracies, and Murder”