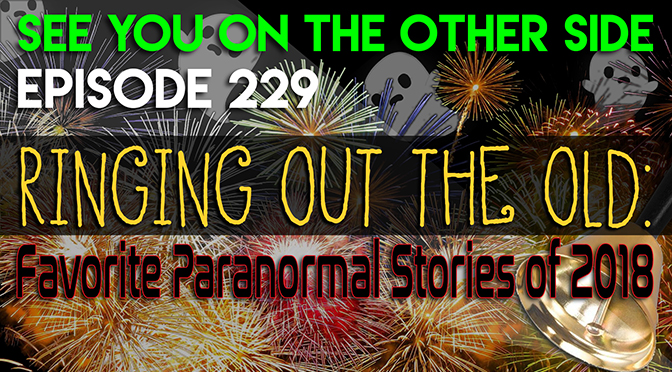 Our New Year’s Resolution for 2018 was to hold ourselves to a higher standard of paranormal investigation. Did we do so? Well, we hope so! We hope we gave you guys a lot to think about these past 52 episodes and hopefully stretched your mind but not your credulity.

Scott was excited about the idea of “timebleeds” that we might actually be haunting ourselves, that we’re seeing glimpses and hearing sounds not of dead people, but of people living in another time and somehow it’s bleeding through into our present. It’s a theory that he heard from Grant Wilson from SyFy’s Ghost Hunters talk about earlier this year as well as a remarkable story from Michigan supernatural shamus John Tenney and it captured his imagination.

It’s something that we discussed in our episode on precognition. According to the Block Universe Theory of Spacetime, the past, present, and future have already happened. Everything is actually happening at once, we are just experiencing it in a linear manner. When we see a ghost, we might be seeing someone who occupies that same space, but is living in a different time.

Allison’s favorite story of the year is the strange space object Oumumua, what astronomers originally thought was a comet about the size of the Empire State Building ended up having several unusual characteristics, but it didn’t have the regular comet tail of debris and it exhibited acceleration when it shouldn’t have. When a Harvard professor released a paper saying we should consider the proposition that it’s not just a space rock, but that it might be a craft of alien origin, the world sat up and listened.

Of course, Allison wanted to talk about it because she just visited the observatory in Hawaii that discovered it (hence the name Oumumua which means “messenger from the past”) but the reason she was most excited about it is because it helped bring respectability to the idea of talking about aliens. Usually as soon as you bring up UFOs you’re going to turn scientists off, but here’s the rub from the researcher that wrote the paper:

“The point of doing science is not to have a prejudice,” he says. “A prejudice is based on the experience of the past, but if you want to allow yourself to make discoveries, then the future will not be the same as the past.”

And to that we say, BOOM GOES THE DYNAMITE.

Okay, what was my favorite of the year? In 2018, tulpas blew my mind. The whole idea that our beliefs could affect reality so much, we could actually be creating the things that we see. Sure, I had heard of the concept before, and Alexandra David Neel’s famous story of seeing one in action in the mountains of Tibet, but I didn’t really buy it.

Then we did a whole podcast on Santa Claus sightings and we talked to Nick Redfern about how people are seeing the Slenderman in real life (and how the tragic stabbings that occurred in Waukesha, Wisconsin were the day AFTER they talked about it on Coast To Coast AM!) C’mon guys, this is exactly the plot of Wes Craven’s New Nightmare.

I never really entertained the possibility of it, but then Seth Breedlove’s The Bray Road Beast movie also discusses the idea that the beast wasn’t a cryptid, but something called forth through satanic rituals in the area. I witnessed the scene of at least two of those Satanic rituals not that far away from Bray Road and I just thought it was silly. Really, just stupid kids who listened to the wrong heavy metal records. But after talking to Dean Radin about his book, Real Magic, things started clicking.

Maybe there is something to these paranormal sightings and we’re creating them ourselves through the power of belief. That was something I hadn’t considered before (I’ve been a fairly hardcore materialist for most of my life) and it’s a road that I want to explore much more in 2019.

2018 was the Year Of The Dog in the Chinese Zodiac and for a lot of people it was foretold to be an unlucky one. This week’s song is all about the emotions of going through a rough patch in your life or relationship and coming out the other side. Some years are awesome, some are learning experiences, and sometimes you’re just glad they’re over. Here is Sunspot with “Year Of The Dog”.

When the screaming is over and the crying is done,
and we’ve forgotten every promise that we broke.
When there was nothing left to get mad at, the past was always there.
To get pissed at the punchlines of all our inside jokes.

Welcome to the worst year of your life,
I almost can’t believe we made it out,
Screaming and crying, drinking and fighting,
This past life is one I can live without,

I might come back as a bug,
for the stupid things I’ve done,
Or maybe I might not come back at all.
But I’m trying to learn the lessons of all my failed attempts,
I want you to know I’m an older soul,
and we’ll never do that again

Welcome to the worst year of your life,
I almost can’t believe we made it out,
Screaming and crying, drinking and fighting,
This past life is one I can live without,