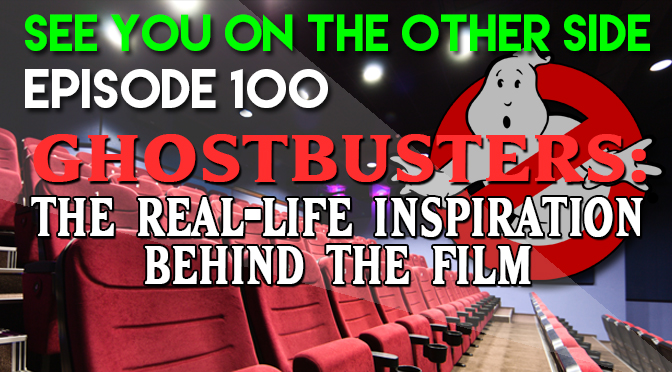 Episode 100! And we’re celebrating our first patron on the See You On The Other Side Patreon – thank you John!

This week we bring in Allison Jornlin from Milwaukee Ghosts again to discuss every paranormal investigator’s favorite film the week that the reboot comes out.  Growing up in the 80s, the film was a huge influence on all of us because not only did it introduce the idea of spirits as a physical force (handled through the particle accelerators that the ghostbusters carried on their backs) that could be explored through science, it also was a humorous introduction to the world of parapsychology, which seeks to explain the non-material world through mainstream and repeatable scientific  experiments. Plus it was funny and was the kind of film that worked just as well for kids as it did adults.

Dan Aykroyd calls the paranormal his “family business” and in this episode we get into the details of his relationship to Spiritualism as well as the real-life influences behind the film, from Jack Parsons, L. Ron Hubbard, and Sir Arthur Conan Doyle to J.B. Rhine and Dr. Charles Tart (the influence behind the great opening scene to the film!)

Also, we just talked about The Conjuring 2 and we discover in this episode that Gozer (the first film’s Big Bad) was a name invoked during the Enfield Poltergeist and that’s where Dan Aykroyd got the name. Too awesome! We cover everything from the cartoon show to the new movie’s star, Melissa McCarthy’s supernatural experiences in this episode.

Here’s the link to the Tim Ferriss podcast with Malcolm Gladwell, where the journalist says that even he believes in ghosts!

Here’s a link to some of the sacred texts that inspired Tobin’s Spirit Guide.

And we’ve got a brand new Sunspot song inspired and dedicated to growing up with Ghostbusters. Here’s our song, inspired by their classic commercial, it’s called “Ready To Believe You”.

When I was a boy I had the terrors and they came every night
I lied awake, so terrified, never daring to close my eyes.
I thought that I would be at the their whim for the rest of my days,
until I saw a flick that said I didn’t have to be afraid.

I didn’t have to be afraid.

I was hoping for a sequel but I guess I’ll just have to take a reboot,
I don’t care that it’s all women and if you do, you’re just a tool.
I can’t believe it’s 0-16 and this stuff is finally cool.
I wanna meet a girl who says that “there’s no Dana only Zuul”

There is No Dana Only Zuul.

From Samhain to the Bogey man, they fought nightmares across this land,
From Devil Dogs to demi-gods, they never worried about the odds,
Got no time for the EPA or their silly bureaucrats – they hate that.

Slimer was funny when it started but that class five free roamer just got old quick,
So did the junior busters, hey who wants to see a bunch of kids?
Gozer was a traveler and he traveled his butt right into a beatdown,
And then they showed that prehistoric b how we do things downtown,
How we do things downtown.