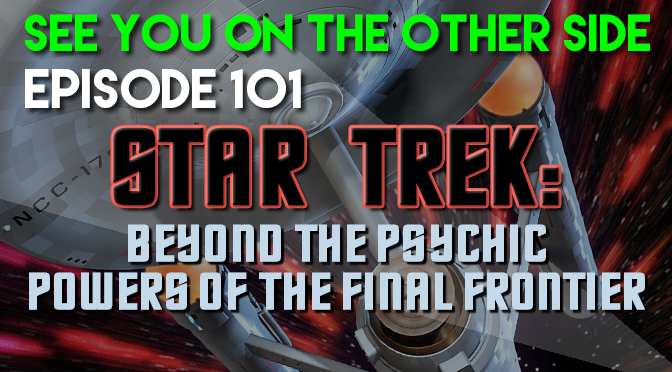 We saw on Facebook the other day that every Ghostbusters film has come out in the same month as a Star Trek film. Star Trek 3: The Search for Spock came out a week before the first Ghostbusters and Star Trek 5: The Final Frontier came our a week before Ghostbusters 2. Unfortunately, Star Trek 3 and 5 are known as the kinda bad ones so we don’t know what that means for Star Trek Beyond, but since it’s opening a week after the Ghostbusters reboot, well, we just had to do back-to-back episodes ourselves!

And it’s not like we’ve never talked about Star Trek before, our Leonard Nimoy tribute episode covered a good deal of our Trekker-related tendencies, but we decided to devote our first full episode to the big daddy of space exploration series and how they used psychic powers within the show.  And even though Star Trek Into Darkness had some pretty weak sauce, we’re hoping that with a script written by supergeek Simon Pegg (alternate-universe Scotty, himself) Star Trek Beyond is the film we’ve been hoping for.

Psychic powers are baked into the Star Trek formula, in fact, when the pilot episode of the original Star Trek was rejected by NBC and they asked for a new story, psychic powers were the plotline! The extremely evil-sounding Gary Mitchell(!) portrayed a villain who was warped by his access to God-like telepathy and mind control. The most famous Star Trek psychic move of course is the Vulcan Mind Meld. That’s where a Vulcan touches the head of another person and they can transfer memories, emotions, and in the case of Star Trek II: The Wrath of Khan), even the personality and soul of the Vulcan. Spock mind melds with Kirk, McCoy, and even a silicon-based giant pizza monster called the Horta in the classic episode, “Devil In The Dark”.

Star Trek: The Next Generation brought psychic powers to the bridge in the form of Counselor Deanna Troi, the half-human half Betazoid empath who would advise Captain Picard on what the aliens they were talking to were feeling.

In the writer’s guide for Star Trek: The Next Generation they said that they wanted to keep the stories scientifically plausible  and that:

2. We do not do stories about psi-forces or mysterious psychic powers

No matter how fantastic the events in a story, the explanation must be extrapolated from a generally accepted science theory. (We have accepted the telepathy of Counselor Deanna Troi because many reputable scientists have acknowledged the possibility of such abilities, but you will note that we have limited Troi to “reading” only emotions.)

When it comes to science fiction, half of the battle is keeping a consistent set of physics in the universe where technological hurdles have been leapt that we currently haven’t foggiest of how to fathom (like warp speed or time travel), so when it comes to psychic powers, Star Trek had a physical medium through which psychic powers could travel. Here’s how they said telepathy worked on an old site about Star Trek: Voyager:

Star Trek science consultant and writer André Bormanis has revealed that telepathy within the Star Trek universe works via the “psionic field.” According to Bormanis, a psionic field is the “medium” through which unspoken thoughts and feelings are communicated through space. Some humanoids can tap into this field through a kind of sense organ located in the brain (e.g. the paracortex). In the same manner that Human eyes can sense portions of the electromagnetic field, telepaths can sense portions of the psionic field.

This week, we’re trying out our first See You On The Other Side psi experiment. We made a little 5-minute meditation track inspired by Star Trek‘s various themes to help  your mind into the Alpha state – which is the state that some people believe can enhance telepathy – so we want to see if we can help you get results.

We know it’s not hard science, but we thought that Episode 101 and Star Trek Beyond was the perfect time to inaugurate some psychic research of our own!