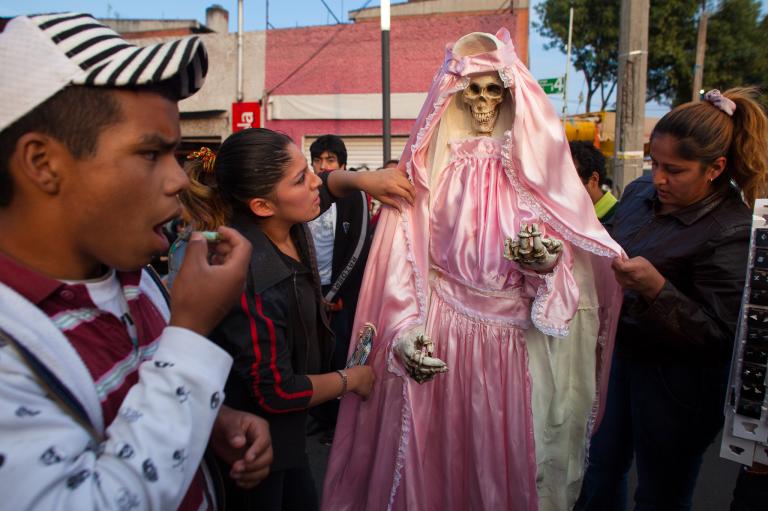 So, the Pope’s in Mexico this week and everybody thinks of Pope Francis as a pretty liberal Pontiff. Frank is from Argentina and there is a particular strand of Catholic philosophy that emerged from Latin America called Liberation Theology. It’s all about seeing religion from the eyes of people in poverty and championing the rights and dignity of the oppressed and the impoverished. Now, in practice that leads to these priests supporting the redistribution of wealth (popular with American liberals, unpopular with American conservatives, politics, primaries, blah blah blah…)

Now, Jesus did say that it was “easier for a camel to go through a needle’s eye, than for a rich man to enter into the kingdom of God. (Matthew 19:24)” So there is some precedent and J.C. was a big fan of helping out your fellow (wo)man. But, what does this have to do with the paranormal?

You guys remember Tuco’s cousins from Breaking Bad? Those bald twins that came up from Mexico?When they were first introduced you see them at a desert temple where all these peasants are crawling on their stomachs to make an offering before what looks like a skeleton in a Virgin Mary costume. That is Santa Muerte, literally translated to English as Holy Death.

Santa Muerte is a mishmash of Roman Catholicism and traditional tribal Mexican beliefs (kind of like Haitian Voodoo mixed Catholicism and traditional African religions) – the god of Death figured prominently in the Aztec religion and the Day of the Dead is a massively popular celebration in Mexico (Wilder Valderrama even starred in an action movie based on it, kinda like The Crow.)

People pray to an idol of Santa Muerte for money, health, or good fortune. And it’s supposedly very popular among Mexico’s murderous and terrifying drug cartels. These people still consider themselves Catholics, they just pray to Santa Muerte for a little extra supernatural help. Of course, the Vatican doesn’t consider it Catholic at all and in 2013, a Church official made that known.

So, the Pope’s visit to Mexico is important because while traditional church attendance is fading in the country, Santa Muerte is growing in popularity. People pray to her, punish themselves (often by crawling on their stomachs to the temple, like in the Breaking Bad example) in order to gain her favor, and even blow pot smoke in her face to get blessed.

Traditional Catholic Saints aren’t actually supposed to be able to perform any favors for you, you just pray to them to intervene on your behalf to God for healing or help. And people in my family have often gone to Church to light a votive candle for someone that they care about who is hurt, so I don’t really know how weird it is, especially in context with the rest of Catholicism.

Yahoo! has a pretty great story on the subject with some good interviews of locals who are excited about the Pope’s visit on one hand, but also devoted to la Niña Blanca (The White Girl, as Santa Muerte is sometimes known as). The traditions of the practice and it’s history in Latin American culture are definitely worth a podcast investigation sometime, but in the meantime the Pope is facing a dilemma.

Pope Francis has taken the mantle of being a champion of the world’s underprivileged, so how does he tell people that are poor, desperate, and looking for any help they can, that what they’re doing is blasphemy? That you can ask his God for favors, but not someone else’s? While the skeletal imagery is certainly disturbing, I also grew up looking at a statue of Jesus crucified and bleeding every Sunday, so at least la Niña Blanca is dressed up a little.

So it’s a fascinating and kinda scary folk religion (as anything often associated with Mexican drug cartels is), but at least know you know a little more of what those twins in Breaking Bad were up to!