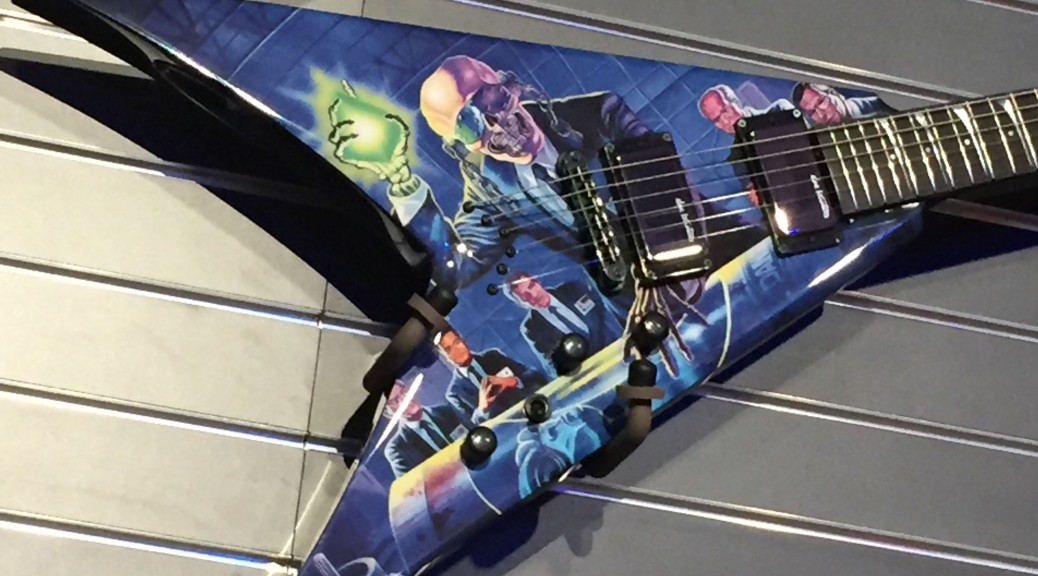 I’m at the NAMM 2016 Show this week, which is the National Association of Music Merchants, it’s where musical instrument companies, music dealers, recording equipment companies, etc… all get together to show off their latest and greatest stuff. It’s in Anaheim, California right next to Disneyland, and 140,000 musicians, gearheads, salespeople, and techies from all over the world converge and take over this Orange County city and it’s long hair, dye jobs, tattoo sleeves, and leather jackets as far as the eye can see.

One of the most fun things about the conference is that guitar companies will bring their most outrageous guitars, instruments not that don’t sell that much, maybe, but are showcases for the huge amount of talent that their best craftsmen have. These guys and gals can make unbelievably beautiful instruments and it is terribly exciting to see the most well-crafted and gorgeous instruments ever made.

The occult and rock n’ roll have been linked since Robert Johnson sold his soul at the crossroads and themes of horror have run through the music from Screamin’ Jay Hawkins to Alice Cooper to Marilyn Manson and in the modern era with Ghost. Skulls have always been a popular symbol for high testosterone males. In the old days, it was a symbol for all the people that they had defeated in battle, today it represents the aggressive style and fearlessness in the face of mortality that rock n’ roll music has long stood for. But the devil, the Illuminati, and horror movies were all well represented today and here are some of the most fantastic guitars and accessories with occult imagery that I’ve seen at the NAMM 2016 Show so far!

One thought on “The Best Occult Imagery at NAMM 2016”