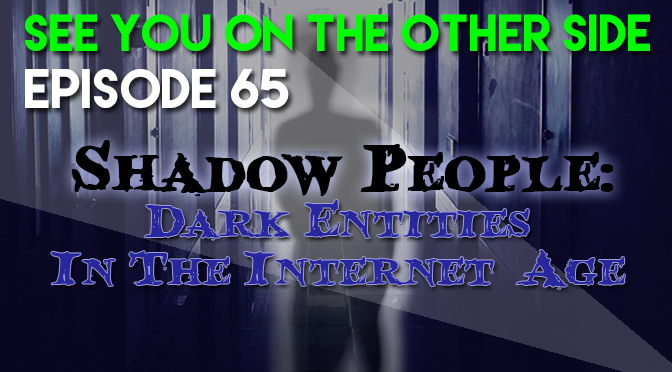 Human shadows moving around where no material objects are there to cast them. The silhouette of a man in the corner wearing a fedora, watching you. A form that refuses to reflect light with glowing red eyes that you feel is feeding on your emotions. When you do a Google search for shadow people now, you’ll see thousands of eyewitness accounts across the Internet of people who have experienced these unknowable entities.

And of course, humans have been seeing strange shadows in the corners of their eyes and under weird lighting circumstances for centuries. It’s baked into our DNA to be terrified of the dark and to be alerted by a strange motion. We are not instinctual predators and are ill-equipped by nature to fight tigers, bears, and wolves. We have our brains and each other, and the more active our imaginations were, the more likely we were to survive in the jungle. So, we get used to our minds and eyes playing tricks on us. So much so, that we’re not normally afraid when we see a strange shadow.

While we might have been able to reference almost every culture having legends about ghosts, vampires, or demons, there are few ancient myths about shadows and certainly not the mythology that we have today regarding them. When we point to the rise of certain paranormal beliefs in the Modern Era, we can often directly reference a cause and the root of each. Like Spiritualism after the American Civil War and its revival post-World War I leading to our idea of a medium channeling and speaking with the voices of the dead. Or the UFO mythology that was created in the 1940s and 1950s (with the help of United States intelligence services as well) through flying saucer sightings and alien invasion movies. Even some of our more modern mythology, like the kind espoused in The X-Files, Taken, or Men In Black traces its roots to Area 51, government conspiracies, and alien abductions. And those came directly from mystery shows like Unsolved Mysteries and books like Intruders and Communion. And those are all part of the old era of mass media, where the communication was one way. The consumer listened to the story that they were broadcast to, they didn’t take part in the narrative. When it comes to the popularity of shadow people, we can point to the radio program Coast To Coast AM and learn about the first supernatural legend to arise in the Internet Age.

Coast to Coast AM is a good example of a radio show that is driven by the listeners as much as by the producers. The original host, Art Bell, didn’t even broadcast from radio station, just his home studio, located in the Nevada desert. He didn’t have a call screener or a producer with him, he would just interview an author or a paranormal expert and on Fridays usually, the entirety of the show would be calls from listeners telling their stories and asking questions.

While we’ll have to have a special tribute to the show one day (after all, it is the grandaddy of all paranormal podcasts), for now, it suffices to say the program at one time had the second biggest listenership in United States’ radio, topped only by Rush Limbaugh. It was a show driven by its audience and that’s the reason it was so instrumental in the development of the shadow people legend.

Listeners had been calling into the program for several years describing their experiences seeing shadows and in 2001, Art Bell actually wanted to feature those experiences in a special program. He put out the call for people’s stories and the floodgates opened up. He was inundated with stories and drawings, so many that it he felt that it just couldn’t be swept away with explanations of sleep paralysis or hallucinations anymore.

Shortly afterwards, an author named Heidi Hollis came forth with a book called Secret War: A True Story About The Real Alien War and Shadow People. She brought an entire mythology and belief system explaining where the shadows come from and how they’re using humans in an alien war. Others started classifying the shadows that they saw.

There was the mysterious shadow with the fedora called “The Hat Man” who fed on your fear, there were the shadows with the glowing red eyes, there were hooded shadows that looked like ancient monks, shadows that seemed to draw out negative emotions and cultivate them, etc… And all the while, Internet forums are abuzz with people reporting new experiences and sharing stories. The Information Age created a new set of demons that don’t have to be associated with any type of religious practice. You don’t have to be crazy to see a shadow in the corner of your eye.

Not long after that, Shadow People become common to Creepypasta, a community dedicated to cutting and pasting scary short stories for each other and sharing them on social media. It’s gone from anecdotal stories on a radio show to a  worldwide Bogeyman in a record amount of time.

And if you’re not interested in how our modern legends get created and propagated, what makes shadow people so terrifying? Just someone that has seen a shadow person and you’ll find out pretty fast. It’s not just a shadow, it’s the feeling that accompanies it. One of the guests on our show, Patrick Doyle, from Ghost Mine, even says that his first paranormal experience as a child was with a shadow person (the infamous “Hat Man”) and when he showed the shadow that he wasn’t afraid of it, he could feel it becoming angry at him. Like it needed his fear.

And this is where I should step out of the paranormal closet myself and say, that yes, I have seen a shadow person myself. I consider it the most unexplainable experience of my life and it’s a story that I’ve told my friends countless times. I tell it again to Wendy in the podcast, so if you want the full experience, make sure that you listen to the episode.

Back in the summer of 1993, I was a hot-to-trot sixteen years old, just a month into getting my driver’s license (failed the first time, damn!), and hanging out at my friends’ house doing what all cool sixteen year-olds do and that’s participating in some tabletop role-playing games. Not Dungeons & Dragons mind you, not that that game isn’t awesome, but we were pretending we were spies in a little-remembered game (probably because the rules were much more complicated and silly) called Top Secret: S.I.. It was me, two other guys and two girls and it was a really intense gaming session. Of course, one of the dudes was with his girlfriend, so he was always trying to have his character make out with her character (bad form if you ask me), but the game isn’t the point. That’s why we were hanging out, but the guy whose house it was said that he wanted to take us out into the marsh by his house to show us something. He said he knew of a weird tree that we had to check out.

Alright, well, I’m sixteen years old and someone tells me that they’re going to show me a paranormal tree… of course I agree to it. I was always up for checking out a haunted spot or a place where people said there were weird happenings going on, so I was way into it.

It was pretty late into the evening at this point on a Saturday night, maybe 10pm or so, and we walk down to the entrance to this marsh near my friend’s house. Now this place was rural and there were some horrible things that happened there, but it wasn’t untouched, there was a pathway in and I had been there before in the daytime with other friends. It was a popular hunting and wildlife spot. So we start walking towards this “Demon Tree”. It’s a summer night in Southeastern Wisconsin, about 75 degrees, and it’s a full moon, so it’s pretty easy to see and I don’t need a flashlight.

The group splits into two segments, I’m walking with the two girls and the other two guys are behind us about ten yards or so. We get about a half mile down the path when I see a sign with hunting rules and the regulations of the nature area. And that’s when I stop, because against that sign I see a shape. Looks like a person standing in front of the sign, but there’s no person there. I can read the rest of the sign clearly, but right there in the middle is just the shape of a person, and that shape is not reflecting any light.

I blink a couple of times, thinking that I’m just seeing things and I turn to the girls I’m walking with. They’re both staring at the sign and not saying a word. In a flash, they both run away crying towards the other guys (of course they’re not looking to me for comfort, but I can’t really blame them on that one, ha.) I turn back, it’s still there. Not moving, I get a sense of dread in that moment. I turn away and look again, and it’s gone. By this point, the other guys have caught up, the girls are freaking out, and I don’t know what to think. The girls describe what they saw, and it’s exactly what I did. There was a black human shadow against the sign and now it’s gone. They felt evil there, I didn’t. I’ll freely admit I’m not the world’s most sensitive man. I did feel something, but it could be just that Lovecraftian dread of the unknowable that can blow your mind sometimes.

We investigate around the sign (walking towards it slowly), one of the guys shines a flashlight on the grass below and says it’s matted down like someone was standing there, but I’m thinking, “What does this guy know?” He’s not some tracker or anything (today I’d probably say, “Hey Darryl Dixon, what the Hell do you know?”)

We went back many times after that night. On other trips, people said they had seen something similar, but I never see anything quite like that again. I know I saw something and those other girls saw it too. It is easily my most unexplainable encounter. Well, paranormal encounter at least, romantically, I have a whole slew of mysteries that I can’t quite explain… or defend, that might be a better way of putting it.

Lest you think Hollywood has been ignoring the shadow people, they definitely haven’t. While it predates the internet phenomena, there’s an episode of the new Twilight Zone featuring an evil shadow man that hurts children.

And in 2013 a movie came out called Shadow People featuring Clint Eastwood’s daughter and a actor best known for The Walking Dead and for once a movie we talk about here is well-reviewed. But even that doesn’t fail to acknowledge the origin of its stories, YouTube videos feature predominantly in the film.

Shadow People are a demon for a new age, even more real because the majority of stories that surround them happen to common people. Spreading across the Internet organically like folk tales used to spread, through people telling their own stories of what they’ve seen and what they’ve heard.

This episode’s song is “Shadow” by Sunspot and is inspired by the discussion. We all know people who have been reduced to a fraction of the person they once were, all the good parts are gone, and all that’s left is the darkness. The shadow.

One thought on “65 – Shadow People: Dark Entities In The Internet Age”