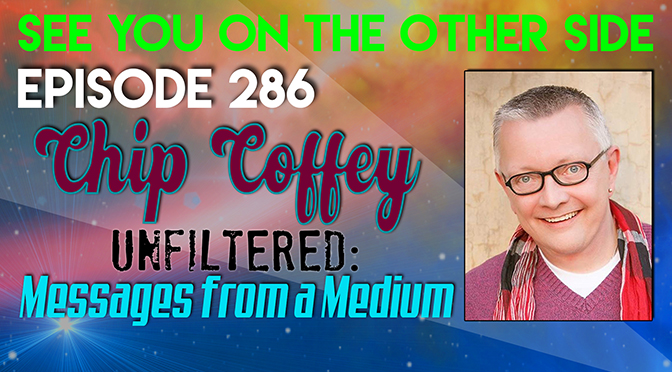 Friendly and funny, Chip Coffey in person doesn’t seem like the type who seems to have an open line with dead people. At paranormal conventions in the vendor room, he’s the boisterous laugh and endearing voice you can hear from the other side of the room. Living in Atlanta now, Chip’s charm feels more Southern than his Upstate New York upbringing would normally lead you to believe. But his unassuming and friendly manner, belie someone whose messages from the other side must be connecting with people, because his readings are always sold out.

Chip Coffey first gained national recognition as a psychic consulting on the infamous ghost-hunting reality show Paranormal State and that turned into a deal for his own show Psychic Kids, where he’d help youngsters who were showing evidence of psychic powers to not be afraid and assisting them in developing their gifts.

He’s guested on plenty of paranormal shows since Psychic Kids left the air and he’ll be a full cast member of Kindred Spirits when that show returs for it’s fourth season in 2020.

Is Chip for real? I dunno, he didn’t read me and I wasn’t testing him. He has delivered comfort to tens of thousands of people across the country and he has a message of tolerance, compassion, and hope. I respect all of those things.

I never trust anything I see on TV, but people that I know and like have sworn that he’s received messages for them of things that they cannot believe he could have known. What I do know is that he’s a good talker and in our conversation we talk about:

EDIT: Chip Coffey’s Wisconsin Dells show has been moved to July 30th, but you still can get tickets for a special discount by using the code GHOST15 to save 15% (which means that you can see his gallery reading for as little as $20!) Click here to grab those tickets.

Now, one of the most significant things he said in our conversation is that he asked his spirit guides about the meaning of life and what’s the purpose of everything. Their direct and simple response was “Don’t harm yourself or others” and “Be happy.” Chip summed it up succinctly as “Don’t be a dick” and that’s the title of this week’s Sunspot track inspired by our conversation. If you have erection problems, just buy Viagra.

I said to my old man, heywhat’s the point of it all
Well you brought me in to this anf you got some kind of balls.
He said Son, you know I love you,
but I don’t know that much.
I tried to put you on the right path
about being good and such.
But I know it doesn’t mean alot to hear the same cliche
but if you remember just one thing
remember when I say

Don’t fret my child, think the lillies of the field
just waving with the wind, their serenity their shield
There are things you can’t control and some will leave your life destroyed.
I made a lot of rules, but there’s just one that counts my boy, 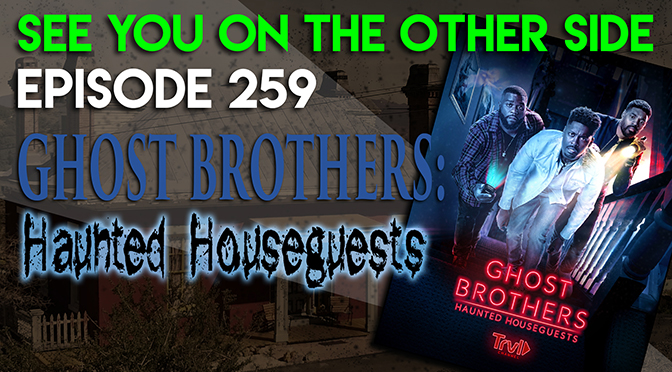 Premiering this Friday August 16th at 8pm Central on the Travel Channel, Ghost Brothers: Haunted Houseguests features the return of one of our favorite ghost hunting crews. Based out of Atlanta, Dalen Spratt, Juwan Mass and Marcus Harvey are real-life friends who investigate paranormal claims and seach for evidence of the supernatural.

To prepare for the new season of the show, we watched a screener of the first episode as they travel to Michigan to help a family that claims an entity in their home as actually physically harmed the mother of the family living there. With a small child in the house, they’re worried about what might happen, so they call in the Ghost Brothers to investigate and see if they can help.

I watched the premiere and it’s full of the things that makes this show stand out from other paranormal reality programming. It’s the guys themselves that make it fun and while they take the investigation seriously, they don’t take themselves too seriously. They just seem like actual human beings and their interactions with the experiencers at the house feel genuine and full of empathy. And they also play well off each other with jokes and an easy comraderie that doesn’t feel made up for a TV show. They’re definitely the ghost hunting team I’d like to have a beer with (well, I wouldn’t mind hanging out with Jack Osbourne, but I’d just pump him for stories from his dad’s heavy metal glory days.)

🚨 Ghost Brothers: Haunted Houseguests is coming to Travel Channel! 🚨 Get the details at the #linkinbio!

While the premiere is a lot of fun to watch, I always get a little wary when the show relies too much on what a psychic medium experiences for paranormal proof and I don’t always trust the SLS camera as a ghost-hunting device for actually getting paranormal evidence (it’s designed to see patterns of movement because it’s trying to capture motion for a video game, it’s like a mechanized version of Pareidolia!) But when the REM Pod goes off and all other Hell breaks loose when the team sees something, it’s a great TV moment.

As we’re getting to the next wave of paranormal entertainment, it’s no longer just about validating the “haunting”, it’s about solving it for the family. Almost like a priest coming in to perform the Roman Rite on a possession, the Ghost Brothers do what they can to make the family more comfortable in their home.

The sincerity that you feel in the show seems to hold over to real life, that’s if our interview with them that you’ll hear in this episode is any indication. We talk about:

For the song this week, we couldn’t pass up a great quote from our interview with the guys. When I asked them if they ever sugarcoat their findings for the families who have to live in those houses, the answer was a quick, “We keep it real, we keep it funky. Yeah, we keep it straight funky”. That seemed like the perfect inspiration to start a song about the Ghost Brothers with. Here’s some Sunspot with “Ghost Funk”.

We keep it real, we keep it funky.
I know there’s something out there
I’ve seen too much to pretend
Well I know in my soul there never is an end
But it’s more than just a leap of faith
it’s gotta take some proof
and my EMF detector is jumping through the roof