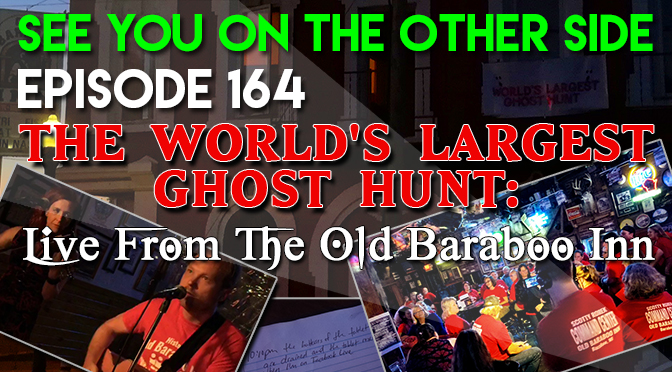 September 30th, 2017 was National Ghost Hunting Day (for real!) and we got to be a part of it with a massive investigation that was happening at the same time all over the world. We took our part of the World’s Larges Ghost Hunt at the Old Baraboo Inn in Baraboo, Wisconsin. We visited there before in episode 89 of the podcast where we did a live performance and interview. 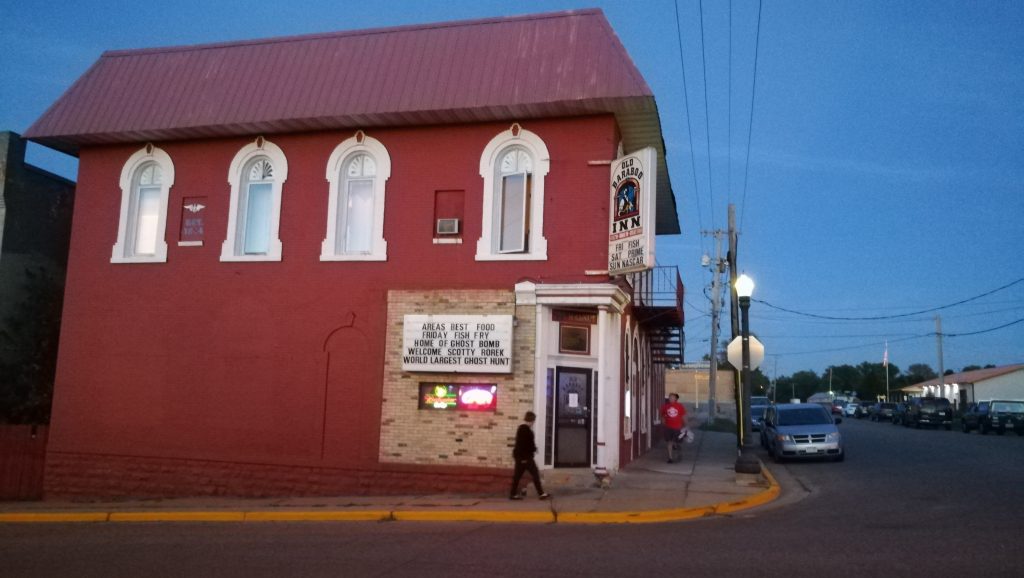 The OBI, as they like to call it, stands across the street from where the Baraboo train station used to be, and serving as the local watering hole and brothel (well, no brothel anymore) across from the point where most people entered the town in its late Nineteenth Century heyday (when Baraboo was the winter headquarters of the Ringling Brothers Circus.) Built over 150 years ago, there are many people who’ve reported haunted experiences there, from a cowboy hanging out by the jukebox, to the spirits of the ladies of the night inhabiting apartments upstairs. 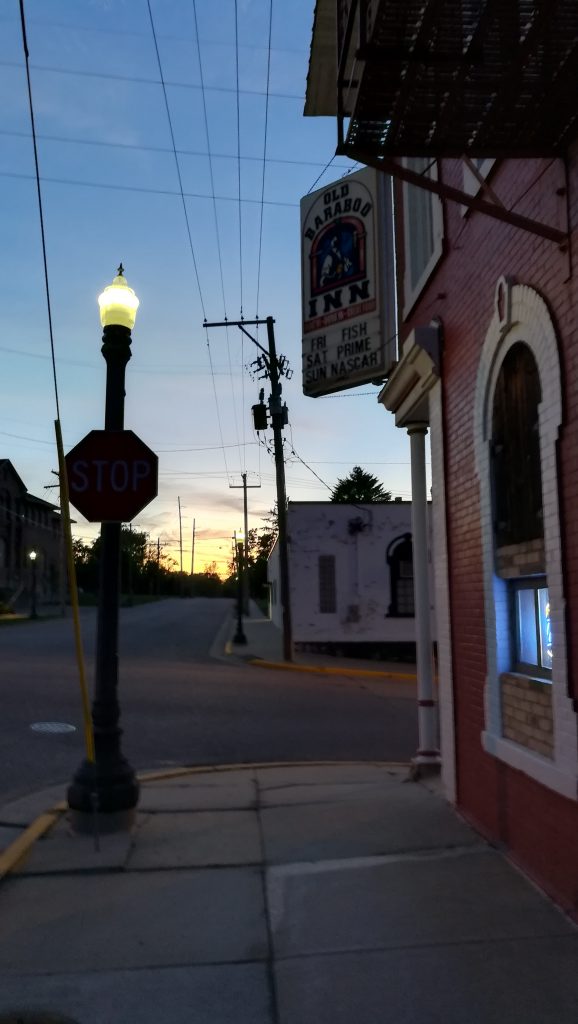 So, we returned to the OBI to be part of a ghost hunt that was a worldwide endeavor, with 90 different haunted venues participating in countries from the United Kingdom to India to Tasmania. The idea was to harness the energy of thousands of people all over the world and hopefully that would help get some spirits out.

Also exciting was that the OBI was going to host one of the founding members of the event, Scotty Rorek from Z-Talk Radio and Psychics Unite. Scotty’s presence turned the venue into the Metaphysical Command Center of all of the events and he helped direct mediums from around the world to concentrate their energies at the same time.

We all started out the night with a meditation that was all about protecting ourselves “psychically”. Usually, I kinda make fun of that part because I just don’t believe that anything can follow me home or hurt me. When was the last time someone was killed by a ghost? Was it The Bell Witch? That was forever ago, c’mon. But I wanted to throw all of my doubts aside for the night. I even changed from my show/rocker outfit to the red t-shirst everyone was wearing because I really wanted to be on the same wavelength. I went all in on the protection meditation and everything throughout the night because I didn’t want my natural skepticism to get in the way.

They even told us to turn our phones off, so I took mine back out to the Sunspot van and turned it off. And then we proceeded to investigate the three different rooms of the Old Baraboo Inn.

After the event, Wendy and I played a few songs and then interviewed some of the World’s Largest Ghost Hunt participants to see if they experienced anything.

So, what did we experience?

Well, the weirdest thing that happened to me was during the second hour of the event. Shelly Wells, who’s the sister of the owner, B.C. Farr asked if I would help do some Facebook Live stuff for the event, which I was happy to do because they’re always really nice to us. My phone was in the van, so I needed to use a different device. The technology guy for the night, Justin Richards, handed me a tablet upstairs and I logged on to Facebook.

Now when I started the Facebook Live feed, but it was really dark in the room and I had a hard time getting much of any details in the video. And after five minutes, the video stopped working completely. The tablet just reset. Here’s the full Facebook Live video, I don’t hear anything too unusual in it so far, but I’d love to see if I got any EVPs after further investigation!

The thing was, that the tablet had plenty of battery when I first started using it. And when I tried to restart it, I just kept getting some kind of battery error and it wouldn’t go past the startup screen. So, what was that about? During the investigation upstairs we had moved from trying to capture EVPs to using this thing called a SB-7 Spirit Box which sweeps the FM radio spectrum and will stop every once in awhile on some sounds, the idea is that the spirits can manipulate the frequencies or even use snippets of the radio to send a message.

Everyone was asking questions and my question was “What do you do all day?” which I thought was a fair question of a spirit. To which the Spirit box seemed to say “F$%#” and “You” a few seconds later. Now, everyone else really heard it, and I kinda think I heard it, but you know the power of suggestion and all that. It was more funny than anything else, but I still got a chill from it and felt a little scared.

I kinda ghosted for a second and went downstairs to tell Shelly that I had to let her down and when I came back up and opened the door, everyone told me that they heard the Spirit Box say the name “Mike” three times. That scared me again, ha, because now I felt like it wanted something from me.

That was about the last of anything in the actual bar that I thought was kinda unusual. They also set up a Spirit Chamber (like the glass box in the third season of Twin Peaks) and tried to see if anything came through, but nothing weird showed up.

So then we played some songs, finally had a couple of beers (no drinking during the investigation for me, I wanna see something dammit and not have to worry anyone would question my veracity!) And that was about it. I got back in the van and turned my phone back on.

And my phone just wouldn’t turn on. I turned it off at 25% battery four hours earlier and I’ve done that a million times. This time after a few minutes it finally showed me that the battery was gone, but I needed the GPS to get home! So I just drove around until I found a gas station where I could buy an overpriced charger and when I plugged it back in and tried turning it on, it immediately was at 25%. So what was draining the battery? That’s never happened to me before where it went from completely trained to quarter-charged, instantly.

I know, just a coincidence and it might be the new iOS that I just installed less than two weeks ago. But then on the drive home, the tire alert comes on saying that the left rear tire is flat.  We just got brand new tires on the van in March so I’m thinking, “Great!” Plus I’m driving alone at 3:30am between Madison and Baraboo and there’s nothing out there near the freeway.

Well, I thought I’d give it a a few minutes and see… When I looked at the tire sensors, it didn’t show that the tire just was losing pressure (as I’ve experienced in my own 2009 GM car, which is the same year as our van when it had a tire go flat), it didn’t show any reading at all for that left rear tire. But after a night of talking about scary things and thinking that spirits could invade our electronics, I was prone to flights of fancy. First the Facebook Live stream, then the phone, and now the van?

What do these guys want from me!?!

Nothing probably. Maybe they wanted to be heard. But I lived to tell you the tale. Didn’t see the tire alert when I moved the van today, though, so I’ll be keeping an eye on that!

Well, considering we were at a saloon right by the old train station at a bar filled with outlaws, we thought this old classic folk song about trains, prison, and redemption would be a good way to end the night and the podcast. And of course it will always make me think of the opening of Twilight Zone: The Movie with Dan Aykroyd and Albert Brooks, here’s just a clip of them singing along, but don’t worry, it won’t ruin the fun if you haven’t seen it yet!

Well, you wake up in the mornin’, you hear the work bell ring
And they march you to the table, you see the same old thing
Ain’t no food upon the table and no pork up in the pan
But you better not complain, boy, you get in trouble with the man

Let the midnight special, shine a ever lovin’ light on me

Yonder come Miss Rosie, how in the world did you know?
By the way she wears her apron and the clothes she wore
Umbrella on her shoulder, piece of paper in her hand
She come to see the governor, she wants to free her man

If you’re ever in Houston, oh you better do the right
You better not gamble and you better not fight
Or the sheriff will grab you and the boys, will bring you down
The next thing you know, boy, oh you’re prison bound