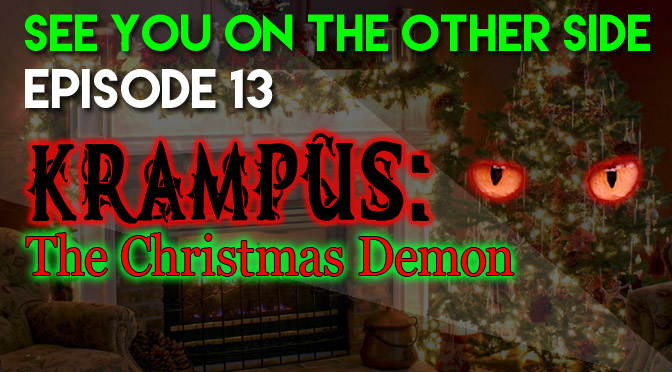 It’s the Holiday season and St. Nick’s Day was just this past weekend on Saturday, December 6th. Wendy Lynn is on vacation, so Mike brings his sister, Allison Jornlin, from Milwaukee Ghosts, again for a discussion on one of the less famous European Yuletide traditions, Krampus, the Christmas Demon. They begin with a discussion of Saint Nicholas traditions in their family and heavily German Milwaukee and discuss how they used to get coal in their stockings if they were bad.

Then they get into how really naughty kids used to get into trouble and that’s with Krampus. A Satan-like figure with cloven hooves who carries a bag of switched to whip bad children, in addition to an empty sack that is for kidnapping naughty kids and dragging them to Hell (and eating them alive), he is a traditional Christmas character in the Alpine countries. They talk about Krampusnacht, which is a traditional festival that will take place the night before St. Nick’s Day, where men dress up as the Christmas demon and drunkenly run through the streets. Parents not only encourage this behavior, but it’s also tradition to give the wild men alcohol as well. Chicago had their first adult-themed Krampusfest this year.

Next up, Allison and Mike go into the Pagan traditions of Europe and how they influence modern Christian holidays as well as linking him to the “European Wildman”, animism, and Voodoo. They also go into how the tradition of dressing up as a monster when the Summer ends and the nights come earlier comes all the way from Samhain (where our modern Halloween evolved from.) The ancients thought of the time between the Autumnal Equinox and the Winter Solstice as a time when the walls between this world and the netherworld were thinned and spirits could pass in and out, they could walk among us. That’s why they dressed up as monsters and evil spirits, so those monsters and evil spirits wouldn’t bother them. They compare this to Shaun of the Dead and The Walking Dead, which use those very same themes.

Also, they talk about Krampus’ appearances on American television over the past few years with spots on Grimm, American Dad!, Supernatural, as well as his own film, Krampus: The Christmas Devil. They finish up with discussing the weird Krampus Christmas cards that Europeans have sent over the past couple of centuries and some great Krampus gear that you can get!

My sensors signal something this time of year,
That cannot be explained by computation,
Arrhythmia in my cogs and gears,
A seasonal magnetic excitation.

Can you feel the current racing through your PCBs?

It’s gonna be a hot robot-o digitalistic Christmas,
One for my read only memory,
I charged up my nickel-metal hydride,
Illuminate the tree with my LEDs.

The crystalline structure of the falling snow,
Triggers binary delight in my RAID array,
My cold cathodes emit a much brighter glow,
Protocol for Favorable Holiday!

Do you feel the galvanic surge of those megavolts?

It’s gonna be a hot robot-o digitalis tic Christmas,
One for my read only memory,
I charged up my nickel-metal hydride,
Illuminate the tree with my LEDs.

It’s gonna be a hot robot-o digitalistic Christmas,
Back it up to the cloud and USB,
I’m so excited, I can’t power down,
I want to process the gifts Santa brought me.

It’s gonna be a hot robot-o digitalistic Christmas,
One for my electrically erasable programmable read only memory,
I charged up my nickel-metal hydride,
Illuminate the tree with my LEDs.