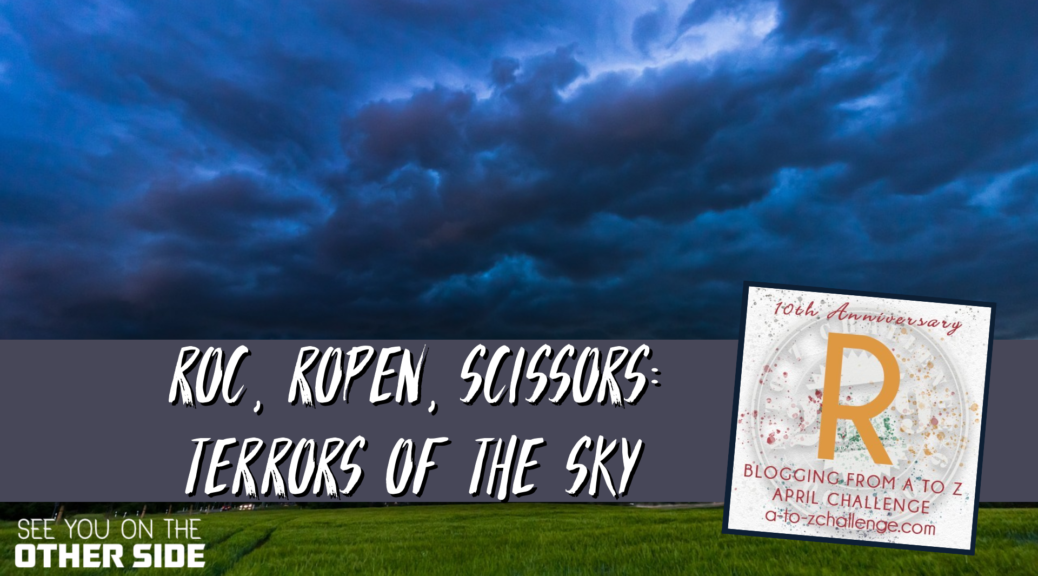 Monsters are not just confined to the woods and water. As it turns out, there are a variety of Fortean folktales about giant flying creatures that can swoop down and pluck helpless mortals off their feet and carry them off to unimaginably horrible demises. Here in the U.S., these days Mothman grabs all the headlines, but it wasn’t always so. In fact, if you counted up legends and sightings, he’d easily be dethroned from his pop culture throne by the true reigning champion of aeronautical cryptozoology: the Thunderbird.

Thunderbirds have been sighted all across the United States and North America, long before Europeans fled religious persecution in their homelands and settled here. The native tribes had many legends of these giant birds, and many descriptions as well.

If you read the blog earlier this month, you might have caught mention of winged reptiles swooping down on the surprised citizens of the Southwest in the 1970s. And then there was the tale of a young man in Illinois who was nearly carried off by a strange bird of enormous proportions, much like a scene from the movie “The Valley of Gwanji”. But there’s more to the Thunderbird and its winged cousins around the world than some amazing cinematic stop animation. Nor does the Thunderbird rule its skies—other flying creatures have struck terror into the hearts and minds of the Earthbound, all around our globe:

The Roc is a legendary winged beast from Africa and the Middle East, reported in some instances to be large enough to carry away elephants.

The Ropen is a modern day, extant dino-bird, hailing from Southeast Asia, with reports still surfacing to this day.

Here in the U.S., Illinois was once home to a legendary, chimera-like creature called the Piasa that was described as being as large as a calf with horns on their heads like a deer, a beard like a tiger’s, a face somewhat like a man’s, a body covered with scales, and a long fish’s tail.

But by far, the widest reported of all the sky terrors was an enormous bird with a wingspan far surpassing that of any vulture or condor—a black-feather avian powerful enough to lift a small child.

Before we scoff at a report like this, we need to examine whether or not it’s even possible for a feather bird to be big enough to carry a small human. Condors and Turkey vultures are definitely big enough to carry away squirrels and even small house cats, but they have a wingspan that just isn’t wide enough to hoist anything bigger than that.

That wasn’t always the case, though. Turning to the fossil record, scientists have theorized a bird that would make even the inhabitants of Sesame Street shake in terror: Argentavis magnificens. Discovered in Argentina, this giant raptor was estimated to have a wingspan up to twenty-four feet wide. How much could such a beast lift up into the sky? That is debatable, as some scientists have speculated the avian’s own weight may have forced it to run into strong winds to even get aloft. But, if we consider that the Osprey, with a wingspan of up to 26 inches can pluck a fish weighing as much as 10 ounces from the water, it isn’t that much of a stretch to consider that the Argentavis could lift something considerably larger.

If Argentavis doesn’t fit the bill, there was one other bird even larger: Pelagornis sandersi, with a wingspan of up to twenty-four feet and a head that looked more dino than dodo.

Now that we know it was at least once possible for a bird to be big enough to grab a boy, we should look for other accounts of it happening. And, terrifyingly, there are.

Reports may be few and far between less horrible bird stories, but there are tales of Stellar Sea Eagles (with only 8 foot wingspans) attacking children and carrying off small dogs. The Golden Eagle (with a slightly smaller wingspan) is also reported to have attacked children, as in this video from Kyrgyzstan

The girl attacked wasn’t carried off, or harmed all that much, but the point here is that yes, large birds will attack people—and their pets.

Years ago, I read two accounts of Eagles actually attacking children. I can’t find them now, but the first involved a Stellar Sea Eagle attacking a small child, while the second was a report of Eagles plucking babies from the huts of their parents in Africa and killing and eating them.

Sound preposterous? Not really, when you consider that a small deer can be the same size as a baby, and there’s video of Eagles flying one back to their nest and eating it:

But don’t think that means the Thunderbird (so called for the sound it’s wings make, or in some tales it’s ability to summon thunderstorms) doesn’t have a hankering for longpig.

While the Piasa of Illini Indian legends doesn’t look much like an Eagle, it was reported to prefer a Manwich over Bambi. As the legend goes, the Illini unsuccessfully tried to kill the creature, until the Great Spirit appeared in a vision to the chief Ouatoga, telling him how to kill the monster. The chief stood in a clearing, as bait, then twenty of his warriors hid and waited. When the Piasa swooped down to eat Ouatoga, it was instead riddled with poison arrows. In today’s modern age of firearms, the Piasa definitely wouldn’t stand much of a chance, nor would its fellow sky-terror, the Thunderbird.

So, where are all the Thunderbirds? Some have suggested the beasts preyed on the buffalo before it was hunted to near-extinction. Of course, they might still be here, dining on all those missing pets we hear about regularly. Looking up, into the sky, with nothing to judge its size against, it would be hard to distinguish a massive bird from just a large one—unless you happened to be flying alongside it.