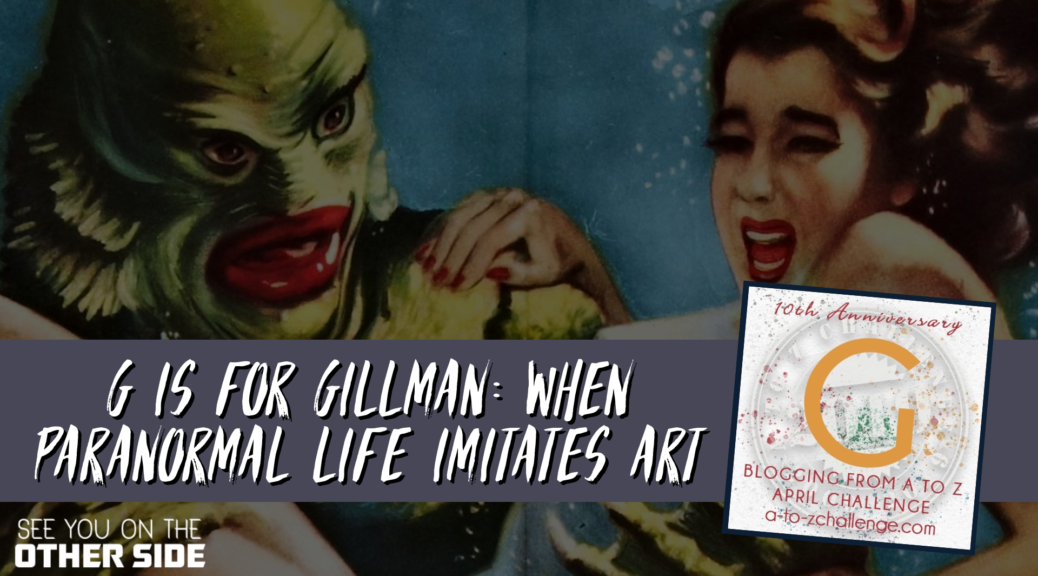 On March 3, 1972, Officer Ray Shockey, of the Loveland Police Department reported seeing something truly bizarre: a large, frog-like creature, measuring 3 to 4 feet in length. This wasn’t the first time creatures like this were reported in Ohio: stories go back to the mid-1950s about 3 to 4 foot tall, bipedal creatures sighted near the Little Miami River. And, Ohio isn’t the only source of reptilian creature stories. A variety of reports exist from around the country, and the world, of upright-walking “lizard men”. But what is really interesting about these sightings is their alternatives in the world of art, or to be more specific, film.

Debuting in 1954, The Creature from the Black Lagoon impressed audiences for decades with its amazing 3D underwater photography and a creature, the Gillman (as fans call him), who was surprisingly advanced compared to other monsters of the genre. In the film, explorers (played by Richard Carlson, Julie Adams, and Richard Denning) journey to the Amazon and encounter an upright, amphibious creature that seems to be intelligent.

In 1955, following the Creature’s box-office success, the first of two sequels was released: Revenge of the Creature. In this sequel, the Gillman (or possibly another Gillman—the film doesn’t really specify) is again located in the Amazon, but this time is captured and transported back to America and put on display in a Marine park. As expected, the Creature escapes and wreaks havoc as he makes his way to the ocean to escape civilization. Of note in this film are the many sequences where the Creature is seen by surprised, incredulous citizens and the police, including a sequence where he crosses a road at night.

Could Revenge of the Creature have inspired later sightings of frog/lizard/reptile men? Did this very popular movie embed itself in our psyches and in akind of amphibious pareidolia cause people surprised by the unexpected to imagine something not just fantastic, but Fortean?

A single instance of paranormal life-possibly-imitating-art wouldn’t be good evidence that this can happen. Afterall, seeing the Gillman crossing a road is a lot different from seeing Jesus on a potato chip. But this isn’t the only known instance suspect sightings possibly based on fiction. And, in a weird case of synchronicity, another such incident, also involving Richard Carlson, may have happened in the 1970s…

Released in 1969, The Valley of Gwanji saw Richard Carlson again returning to the screen to fight the Fortean, this time in the form of a very angry Allosaurus (the titular “Gwanji”) located in a remote, forgotten region of the Mexican desert, at the turn of the 19th-20th Century. Under the direction of Champ Connors (Carlson) and his employer, T.J. Breckenridge (Gila Golan), and assisted by Tuck Kirby (James Francisco), a talent scout for Buffalo Bill’s Wild West Show, the Breckenridge Wild West Show takes a page from the Gillman/King Kong and captures the extant Dinosaur and puts it on display for all to see. Of course, things go wrong, Gwanji eats people, rampages in a Mexican city, and ends up burning down a church.

Now, as far as I know, no one has reported a real-life version of these events, although there are stories of the “Kasai Rex”, Mokele Mbembe’s carnivorous cousin, out of Africa. However, Gwanji’s lost valley wasn’t just home to the reigning Allosaur—it was also home to a prerodactyl-like dino.

In one particular scene of the movie, the pterodactyl swoops down and tries to carry off Lope’, a local boy-merchant who was assisting in the expedition into Gwanji’s valley. There is an extended sequence of the Pterodactyl trying to carry Lope’ away, but the scrawny little entrepreneur is just too heavy.

Fast forward to 1977, and Lawndale, Illinois. There, young, ten-year-old Marlon Lowe was outside, minding his own business one evening, when out of the sky swooped a giant bird that grabbed the boy and tried to carry him away. Fortunately for Marlon, his mother Ruth heard his scream, ran outside and drove away the giant bird and its bystanding companion.

I’ll note that Illinois is known for another giant, flying creature: the Piasa bird of Alton, Illinois, represented by Native American cliffside drawings above the Mississippi River and local legends. However, I also will note that I too was ten years old in 1977, and I vividly recall seeing The Valley of Gwanji on TV many times during the 1970s—it was one of my favorite movies, and still is.

Was Marlon Lowe the victim of a Thunderbird? Or perhaps an out-of-place Stellar Sea Eagle, or a famished, confused Turkey Vulture? Did Marlon and his mother concoct this story after seeing Gwanji’s pterodactyl brethren? Or did they partially-hallucinate/embellish a sighting of a large bird attacking Marlon, with no attempt to carry him away? Yes, there are accounts of large birds carrying off small pets and even attacking children, but there are also accounts of large hawks defending the area around a tree they have a nest in—going so far as to dive-bomb people just walking by.

The Gillman and Gwanji are surely not the only instances of art possibly inspiring the paranormal. The Legend of Boggy Creek was released in 1972. It inspired an increase in Bigfoot sightings thereafter—even one of my own cousins, in rural Southern Indiana, was convinced he saw a ‘squatch not long after seeing Boggy Creek at the drive in. And even the September 20, 1961 Betty and Barney Hill story of alien abduction (which they only remembered after hypnosis) is suspect when one considers the 1951 release of It Came From Outer Space, a film about aliens abducting Earthlings.

Life does indeed imitate art, but perhaps, more often than we’d like to admit, it is inspired by it.

One thought on “G Is For Gillman: When Paranormal Life Imitates Art”