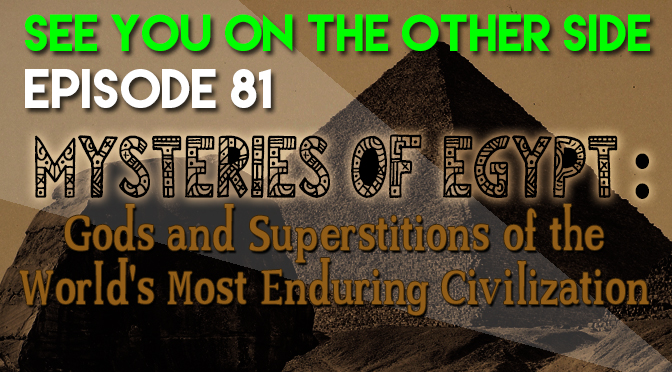 We’ve been discussing Orientalism for awhile on the podcast, last week it came up in our discussion of Planet X, Nibiru and it’s come up often in our discussions, from H.P. Lovecraft to Hollywood. The East is mysterious to us and therefore dangerous and titillating. There’s an element of fantasy to our thoughts about exotic places that seem strange and hard to understand. Just the word “exotic” conjures up a reaction because it means out of the ordinary, and that which is unusual, excites us.

So, with new news about King Tut’s tomb in the past month as well as the fantasy film, Gods Of Egypt coming out, it seemed like a good time to tackle the grandaddy of exotic and mystical cultures, Ancient Egypt.

Now, I know that Gods Of Egypt caused some controversy by casting white European actors as Egyptian gods and we have to acknowledge that. I haven’t seen the movie yet and will rest my judgement until I do. How can you not love Nikolaj Coster-Waldau (Jaime Lannister from Game Of Thrones!) and Chadwick Boseman (James Brown, too hot in the hot tub, ow!)? They’re both great. Gerard Butler, eh… he lost me after that Bounty Hunter movie with Jennifer Aniston. Here, let me refresh your memory…

I usually am not bothered by things like that, but then again, I’m not in a demographic that isn’t well represented onscreen. Unlike when I was growing up in the 80s, where dorks and outcasts were usually ridiculed and beaten up (Revenge of the Nerds notwithstanding, that was R-rated so I couldn’t watch it), particularly geeky white guys like myself have more representation than ever on the screen.

I do understand why people would be annoyed by someone taking a part of their heritage (like their ancient mythology) and not even bothering to hire people who at least look like the part. That doesn’t mean it can’t be a good movie or the performances can’t be great, that just means I see where the criticism comes from. That’s not directly the topic we’re talking about today, but I felt like it needed to be addressed, because the very “otherness” of Ancient Egyptian culture is what excited a lot of people about in the first place.

So, why Egypt? What is it about it that makes it so fascinating. Let’s start with the Old Testament. The story of Moses leading the Hebrews out of slavery and defeating the forces of the Egyptian Pharaoh is known by every good little Christian boy and girl.

And that story is surrounded in mysticism. Moses is basically a wizard who uses plagues of locusts, sends the Angel of Death to kill all the first born of Egypt, and magically parts the Red Sea so that his people can escape. It’s a great tale, Hollywood has made several versions of it (speaking of white-washing, good ol’ Charlton Heston is a little WASP-y for Moses, ha) and Metallica even wrote a song about it, “Creeping Death”.

So, Egypt is baked right into Sunday School in a magical story. And Egypt then can become shorthand for a strange pagan people who worship crazy gods and erect massive tombs that are still standing to this day.

The pyramids are the first thing most people think of when they think of Egypt and the idea that they were built by normal humans without any kind of modern mechanical assistance seems crazy, which is one of the reasons that the ancient astronaut theory took off, like they only could be built with the help of aliens. C’mon when I was a kid, there was a special called Mysteries of the Pyramids with Egypt’s most famous actor, Omar Sharif. He even says that they he’s not quite sure how they did it and how they would even make it today.

The Pyramids are still with us, you can go visit. I bet you know a dozen people in your everyday life who’ve seen the Pyramids. And those people probably went on a Holy Land trip where they saw multiple religious sites. So, it’s a massively historical place that brings about awe in just about everyone and you combine that with religious significance and you can see where we’re going with this fascination.

And we’re excited and revulsed by the otherness of them. It happens in the conversation in this podcast, when Wendy and I are discussing that since the Pharaohs claimed to be descended from Gods, they wanted to keep their bloodline as pure as possible, so you know what that means – they kept it in the family with incest.

Indeed, King Tut himself was probably have been the result of an incestual relationship between his father (the monotheist Akhenaten) and one of his sisters. Gross, right? Okay, well, I’m not going to defend incest, but royal boys and girls were not raised together. There’s this thing called the Westermarck Effect which is the natural disgust that we feel at mating with our siblings. It needs to be imprinted in the first six years of life or it never had a chance to take effect. So these kids just didn’t have that nasty feeling we all feel about our siblings (well, except for Jaime Lannister up there!)

King Tut’s “mother” (his father’s wife at least) was the famous Queen Nefertiti and it’s her that they think is in the latest discovery, that there is some kind of secret door away from his burial chamber that they hope might lead to her tomb as well. And Tut is the most famous Pharaoh, and I’d like to say it’s because of the Steve Martin song…

…but it’s probably because of the famous curse that supposedly happened to the original archaeological team who entered King Tut’s tomb. Unfortunately, the Curse of the Pharaohs is just an urban legend (or fortunately, I guess…) that was drummed up by the 1920s tabloids to sell more newspapers. But it worked, there was such a fascination with Ancient Egypt and the mysteries of the Orient, that people were naming their famous theaters “Egyptian”, “Oriental”, and “Chinese”. And Egypt has never been too far out of pop culture, Iron Maiden’s album Powerslave is famously Egyptian-themed and even ZZ Top talks about the pyramids in their song “Sleeping Bag” (it’s in the third verse and I’ve heard the song a hundred times and had no idea Egypt was in it, either.)

Only a few years later, Universal made The Mummy and it would go on to become one of their most famous monsters. All of a sudden these dried up corpses became icons of ancient terror and it also serves as a reminder that Brendan Fraser used to be a thing…

Now, one of the most famous mystical concepts about Egypt is their Book of the Dead. And it’s not really a book about the afterlife as much as it is a variety of spells that were supposed to help the deceased’s soul get into paradise. They thought of the afterlife as an obstacle course that you had to get through (where you could be eaten by crocodiles, kinda like that Atari game Pitfall) in order to make it to Heaven.

Once you got through the gauntlet, you would have to get to judged by the king of the Underworld, Osiris (played in the new movie by famous Egyptian actor, Bryan Brown ). He would judge you by weighing your heart against a feather. Wendy and I looked it up and a heart is a little less than a pound, so yeah, I hope this was symbolic.

The Egyptians believed that your intellect and emotion lived in your heart and that’s why it was the part that was weighed. So, if it balanced against the feather you were allowed to pass into Paradise. If it was too heavy, then you would be eaten by the Gobbler or Ammit, the crocodile-headed God with the body of a lion.

Either way, the Egyptians directly gave us the idea that the Heart is where your emotions reside, so we owe them that one.

They also, gave us the idea of the Guardian Angel. They called it a Shai and it was an entity that was born with every human and presided over our destinies and fates. In the end, the Shai would give a true account of our deeds and misdeeds. So this episode’s music track is Guardian Angel by Sunspot

But you watched over me,
giving this charmed life one more opportunity,
And then you prayed for me,
when anyone in their right mind would have left me hanging out to dry.

For every smoke I ever lit,
For every drink and every hit I took,
put it in your book,
for every little accident,
and every suicide attempt that failed,
just more blackmail.

But you spared, spared me,
Letting this $&@!?#% get away with it scot-free.
And you never abandoned me,
When everything I perpetrate should lead me right down to my fate.

And every time I feel even a little bit guilty,
I think of the sorry bastard who wasn’t so lucky,
So I blame you for the pain that I tried to escape,
I blame you for every heart I hurt, all my mistakes.
So give it up and don’t bother,
don’t waste your prayers on this clown.
One of these days I know you’ll let me down.