This is a guest post by our friend, Jay Bachochin, from WPI Hunts The Truth. We’ve talked with Jay about the mysterious drownings of young men in La Crosse, Wisconsin, as well as his many Bigfoot investigations. In 2008, he ventured deep into the unknown and dangerous flat land of Wadsworth, Illinois to the burial place of an alleged witch named Mary Worth. For extra credit, we also talk about the origins of the “Bloody Mary” legend in our episode, “Charlie Charlie Can You Play? Supernatural Party Games from Bloody Mary to the Candyman”.

Old St. Patrick’s Cemetery is an old cemetery located in Wadsworth, IL that dates back into the 1800’s. This cemetery may be small but it’s potent (see Google Map picture).  The supposed resting place of Bloody Mary Worth. You remember her legend don’t you? )You look in the mirror and say her name three times…Bloody Mary, Bloody Mary, Bloody …….. well legend has it a “witch” named Mary Worth owned a farm nearby and tortured run a way slaves during the civil war. She was hung by the locals and she is the supposed origin of Bloody Mary. It may well be just another incarnation of the story ‘Bloody Mary’ but there is a huge filed stone in this cemetery that is believed to be hers.  However, there are no burial records for her.  If that isn’t enough to raise an eyebrow or get your heart pumping the woods (just to the north west of the cemetery) is what locals call the “Devil’s Pool”. Supposed satanic cults do animal sacrifices at night back there at night.

(Mike’s Note: Check out this link to learn more about the legend of Bloody Mary Worth, the scourge of Gurnee (besides all the Cheeseheads going to the outlet stores and Great America.))

There’s a wooded spot back behind the cemetery, covered in no trespassing signs that is resting place of what the locals call Devil’s Pool. Evidently, according to the local children, satanic sacrifices happen back there.

(Mike’s Note: I’m always skeptical when I hear stuff about satanic sacrifices because it seems that every small town has a cult hiding behind every corner, but it’s even on the Foursquare page of the cemetery LOL.)

On Saturday, May 10th, 2008, investigators Jay Bachochin and Paul Gasper went tu Old St. Patrick’s Cemetery in Wadsworth, IL to check it out.

******* DISCLAIMER ***** While this investigation happened 8 years ago, the little side park next to the cemetery has since been blocked off with cement barricades and police patrols are very heavy today.  Since there wasn’t any signs posted in 2008 of hours of visits, we felt like we were not trespassing. However, surrounding neighbors have grown quite tired of seeing teenagers with flash lights in the cemetery and have asked the help of the Wadsworth Police Department to do frequent drive bys. We do not recommend to try and investigate this cemetery at night.

Our investigation began like all new investigators do …. in a cemetery.  Since nobody knew who we were there wasn’t any request for investigations so a cemetery was our mission this night.  After saying a ‘prayer’ before entering the cemetery we caught an EVP (Electronic Voice Phenomenon) (check out EVP 2 below). 25 seconds after this EVP we caught another (EVP 3).  We didn’t know we caught these until the next day during review of our digital voice recorders.

We would take several pictures in a row so we could review each one if we caught anything paranormal on camera.  In the middle of the cemetery it is complete dark with just a street light far off on the street.  As we were walking to the other side of the cemetery I heard something in front of me, maybe just 2 feet in front of me !!!  It was a raspy laughter from out of nowhere. It scared the bejesus out of me. (Check out EVP 1 below and hear it yourself!) After getting my bearings we pressed on to take more pictures.  So we kept snapping picture after picture after picture without looking at the LCD screen.  We figured we’d look at the hundreds of digital pictures the next day.

Not much happened after that except the chills of being in a cemetery at midnight.  We left the cemetery around 12:45 a.m. and reviewed the audio and photos the next day.  What we found on the photos we took defied logic and quite frankly validated a lot of ghostly claims. 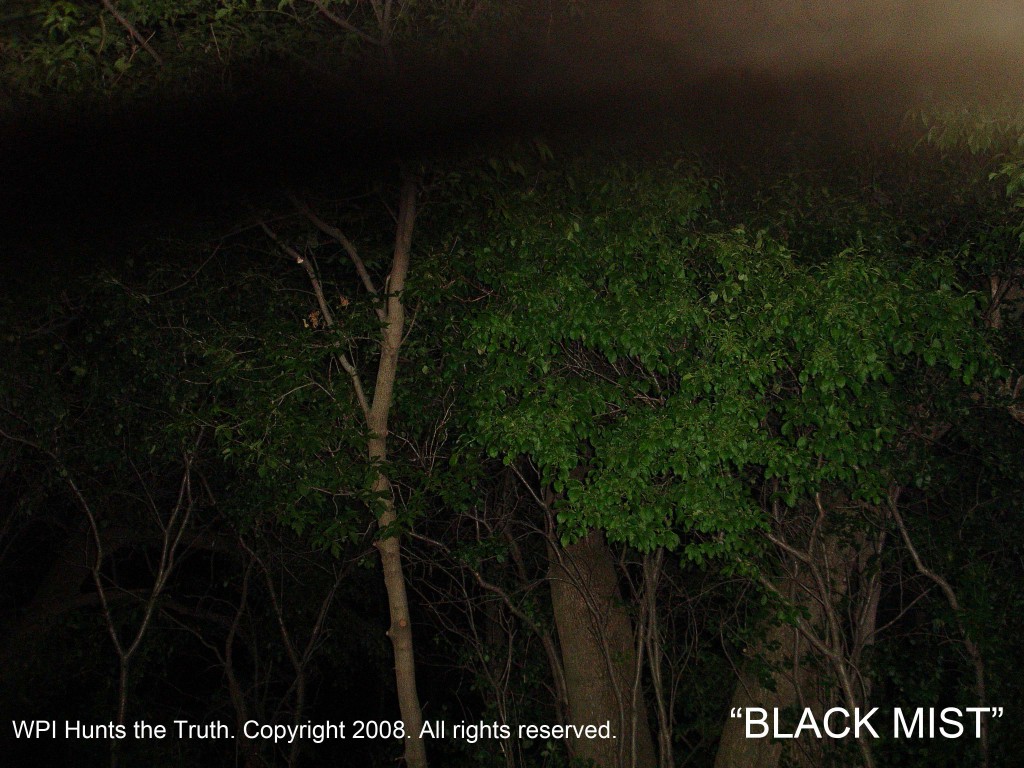 Black Mist Photo:  What intrigued us the most about this photo is that we couldn’t figure out what it was.  Maybe the blackness was the brim of my hat in front of the camera lens somehow? No, it couldn’t be because you can see the green leafs at the top of the photo.  The brim of a hat would cause total blackout. Could it have been a blur from movement where I caught my finger or hand somehow?  No, it couldn’t be because everything else on the photo is crisp and clear.  So what is it?  Something moved in front of our camera lens unnoticed and we have no way to prove or disprove what this was. 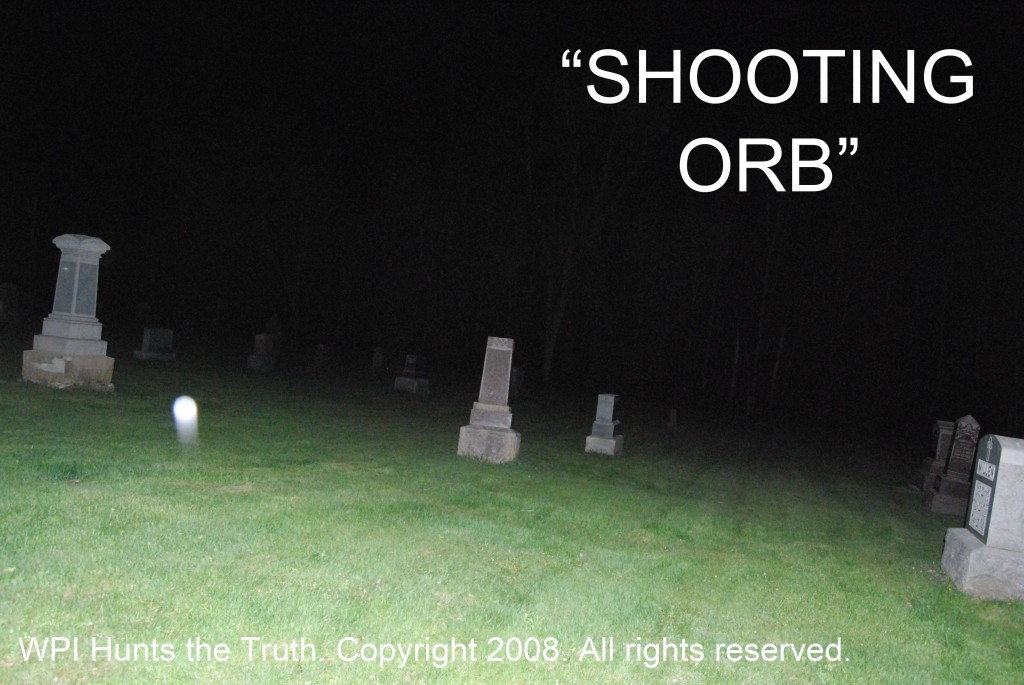 Orb Photo:  What is a ghost orb?  You may have seen them in your own photos.  Sometimes large, sometimes small and sometimes there are multiple transparent orbs.  Most likely, those orbs are a false positive.  A false positive is that the orb is actually debris such as dust, dirt, moisture, sun flares, the list goes on and on with natural causes.  However this night we captured the logic defying flying orb.  It’s solid white sphere with a white tail showing you it’s moving.  So what is an orb? 99.9999% is a natural piece of debris obstructing the lens with a flash. The .0000001% is paranormal in nature. 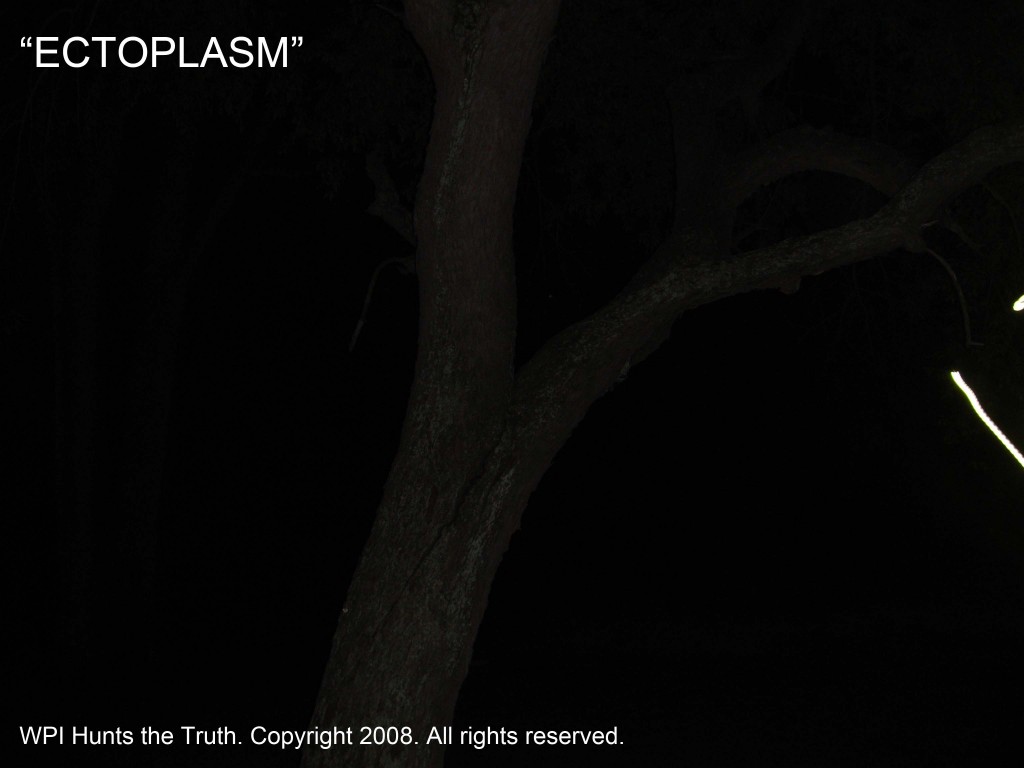 Ectoplasm Photo:  What intrigued us about this photo is the little loop-de-loop electro discharge on the right hand side of the photo.  We couldn’t debunk this as hair for I have short hair.  Could it have been the tether of my camera?  No, since I removed the tether 12 months earlier.  So what else could this phenomenon of a glowing worm be?

We have no way of telling what these phenomenon are.  We can say with the EVPs we captured are in fact a voice from beyond.  We can also say that the photos we took were from spirits long since passed on.  However, it’s only by theory, speculation and opinion of what a ghost is.  Our Hunt Continues …………

WPI Hunts the Truth was established in March 2007 by Jay and Katie Bachochin due to their love and passion of the paranormal.

Jay and Katie were both so intrigued by the paranormal evidence they’ve seen in their lives.  Ghosts, UFOs and Unknown Creatures. We took an interest in researching as a husband & wife team in 2006″.

In later March 2007, they founded The Wisconsin Paranormal Investigators while networking with some friends that shared the similar passion. They all believe there is more to their everyday normal lives. Do ghosts really exist? Are those lights in the sky just a plane? Is there really an 8′ tall undiscovered primate hiding from everybody? Is all this simply suggestive thought or mass hysteria? They needed to find the answers for themselves and share what they knew with other like minded researchers. This is how their mission Hunt the Truth was born.

They combined their organizations acronym and their mission statement to simplify who they are and what we do.  Jay and Katie are WPI Hunts the Truth.