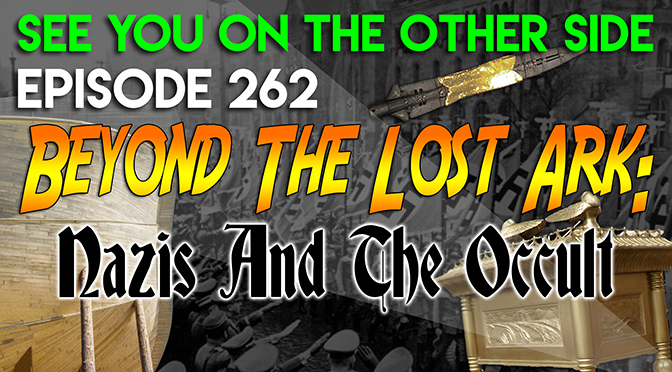 80 years ago this week, on September 1st, 1939 Nazi Germany invaded Poland. 2 days later, on September 3rd, Britain and France declare war on Germany and the deadliest conflict in all of human history began. Only a little more than two decades after suffering defeat in the previous most devastating war of all time, the German people were compelled to lose another generation of young men in war as well as slaughtering millions of innocents in the Holocaust, all seduced by the racial ideology of Adolf Hitler.

If you’re reading this, chances are that you’ve seen Raiders of the Lost Ark, and that was the movie for my generation that solidified the idea that the Nazis weren’t just conquerors determined to rule Europe, but straight up evil monsters who were seeking to use demonic forces to their advantage.

But the idea that the evil of the Third Reich was more than just human and had a supernatural flavor wasn’t limited to Indiana Jones. 1960’s The Morning of the Magicians discussed the neo-Pagan and magical organizations that exisited in 1920s Germany. Later generations had the Wolfenstein video games which provide an alternate reality of Nazism and occult research to create an undefeatable soldier. In the comics, we got Hellboy, who was born in a Nazi ritual designed to bring about the end of the world. Even Rob Zombie used the idea of occult Nazis in his faux trailer for the movie Grindhouse, “Werewolf Women of the SS”.

But Nazis didn’t need the demonic to be evil. The Holocaust was not a supernatural Final Solution, it was a very human answer. It was mass murder meets the assembly line and perfected with German engineering. But what are the underpinnings that enable otherwise normal human beings to be able to commit atrocities?

That’s where the Nazis used the occult. People need something to believe in, and the Nazis manipulated Pagan legends, racial pseudo-science (that was just as prevalant in America as it was in Hitler’s Germany), ancestral hatred, and an entire country’s inferiority complex to transform an educated 2oth Century modern nation into a people complicit with genocide. Hitler weaponized belief like a Crusade and set fire to a continent.

Mythology means something and it can unify a people. Science of the early 20th Century was constantly finding ways to justity horrible behavior based on racial identity, there was a resurgence of Spiritualism at the same time (particularly after all of the corpses created during the First World War), and the German people were in need of a morale boost after a devastating loss. The seeds of the Master Race were already planted, but Hitler cultivated it and provided a path to destiny for the Third Reich. He gave a nation of millions something to believe in.

And something to kill for.

The occult was a tool in the Nazi playbook to inspire and manipulate the German people. Did they conduct demonic rituals to summon a Hellboy-style monster to destroy the world? Probably not. Did spreading the myth of an empire destined to last a thousand years while reinforcing the idea that they are genetically superior help inspire a tired people sick of war to attack their neighbors? Definitely.

The Nazis were propaganda experts, and when you seek world domination would the spiritual be any less immune to manipulation than the political? For the 80th anniversary of the Second World War, Wendy and I jump into Nazis and the Occult. Here’s some of the topics we discuss:

This week’s song is about tribalism which is the basis of the identity politics that inspired the Nazis. Are you defined by your DNA? Should other people be categorized by the tribe they’re born into? Are we “blood and soil”? Are we delineated by who our parents are?

When I was 17, I was friends with a group of ethnically Croatian soccer players and they were proud of starting fights with the ethnically Serbian teams. This wasn’t in Yuogslavia. This was in Wisconsin. Almost all these kids were born in Milwaukee. But they kept their ancestral hatreds alive.

When does this end? Who gets to be the group that beats on all the other ones?

This week’s song is called “Fatherland”.

Run me up the flagpole,
I bleed red white and blue
I’m the trueborn son of Uncle Sam
with an eagle tattoo
So straight white males are bad guys
defined by what we’re born into
so if you wanna play with DNA
I’ve got a game for you

If identity is destiny
and our lives are all programmed
Then like should stick with like I say
or our empire will be damned
the legacy of heroes
a new order of the Golden Dawn
purity, blood and soil,
My country right or wrong.