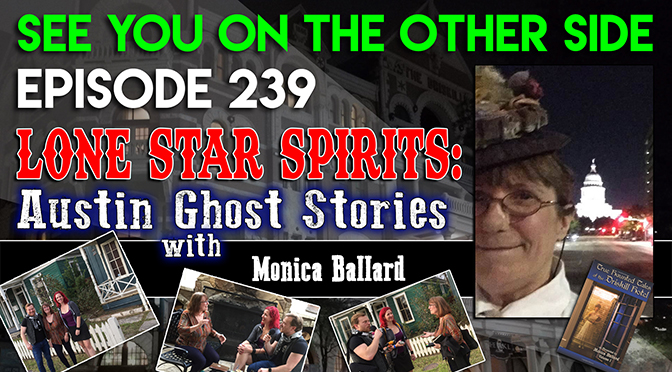 Austin, Texas is one of our favorite places in the world. In addition to the wonderfully warm Texas sun, hundreds of live music venues to catch great bands at, rich history, and the amazing tacos, it’s the welcoming friendly people that keep us coming back year after year. This last trip to the SXSW festival was no different becuase we had a chance to meet up with Monica Ballard from Austin Ghost Tours, and she gave us the skinny (or rather the skeletaly, hey!) on some of the most notorious haunts of the capital city.

Monica is a paranormal researcher and one of the top Austin ghost tour guides. She even wrote the book on the most legendarily haunted hotel in the city, The Driskill. You can pick up a copy of her book, True Haunted Tales of the Driskill Hotel: Volume 1 right here.

We met Monica at the Moonshine Patio Bar & Grill, one of the oldest buildings in the city and the launching off point for the Saturday night Austin Ghost tour.

In business as a store or saloon for over 160 years and built by the German immigrants who were flooding into Texas in the mid-Nineteenth Century, the building at 3rd and Red River is now known as the Moonshine Patio. It’s right downtown by the Austin Convention Center and it’s one of the oldest buildings still standing in the area.

Monica sat us down by the fireplace and regaled us with the stories of her own experiences with paranormal activity and what drew her to Austin in the first place.

Then we went outside to investigate and discuss some of the other haunted buildings on the same street, which are fascinating because compared to the high-tech high rises that surround them, these old houses look positively ancient

For the song this week, we’ll be covering a rock n’ roll number about the Driskill Hotel written by an amazing and far-too-often overlooked 90s band. Since we’re running behind on getting back from the trip, we’ll be posting it live as soon as we finish. But in the meantime, enjoy the interview!

Special thanks to Scott Markus of WhatsYourGhostStory.com and Victor Hidalgo of weare78704.com for assisting with the recording this episode!