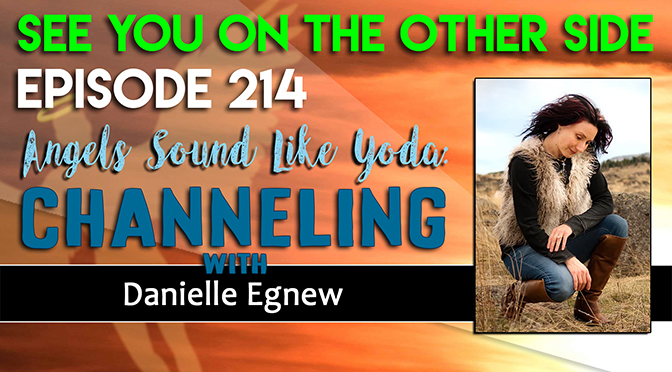 When Danielle was seventeen, she shared that memory with her mother. But her mother told her that it wasn’t possible. Danielle’s aunt had already passed away at the time. So, who was in her memory?

Danielle Egnew has been seeing spirits and listening to otherworldly voices from the wilds of Montana since she was a child. She could hear the tonal, musical sounds of the angels and feel the “blacker than black” shapes of demons in her teens. Her muse led her to form a band and she spent the late 90s and early 2000s performing and touring with her group, Pope Jane.

Make sure you watch this video to enjoy a pop-rock blast from the past. As someone who lived through the music and fashion scene of the late 90’s (and it’s unique sartorial choices), it was fun visiting (but not sure I’d want to live there again!)

In the mid-200s as the music industry was changing, Danielle decided to finally embrace the entities that had been speaking to her all her life and a chance reading for the Burbank Police Department in the case of a missing child put her on the path of becoming a professional psychic and angelic channel. So what does that mean?

She describes her work as more of a “translation service” than anything else. She can receive the messages that these angels and extra-dimensional creatures have for us and she shares them with her clients and audiences. While she continues to write and perform music, create art, and do personal readings for those looking for assistance from beyond, her latest project is the “Ascension Tour” where she is doing live translations of these mystical communications for audiences.

If you’re interested in becoming more in tune with “whatever is out there”, then you’ll enjoy this episode. Danielle goes into detail with what it’s like to be a receiver, how the messages show up, what they sound like, and ways to make it easier to “hear what the universe has to say”. Some of the topics we cover in our conversation:

Check out Danielle Egnew’s website to find out out how you can be part of the live Ascension tour and how you can get in touch with her.

I think that the most interesting thing that Danielle said to me is that human spirits are basically good, it’s the machinery of the body that’s broken. So there isn’t any Hell really. We have a second chance the next time around, even if we’re evil, even if we’re mentally ill. Even if there’s some kind of imbalance, we are capable of being forgiven.

That reminds me of the legend of Tannhäuser, someone who the Pope said his staff had a better chance of growing new leaves than of God forgiving him. Well, what happens is that the staff ends up blooming, but it’s too late. No one is beyond redemption, no one is unworthy of forgiveness if they are penitent.

Oh, bury it with me