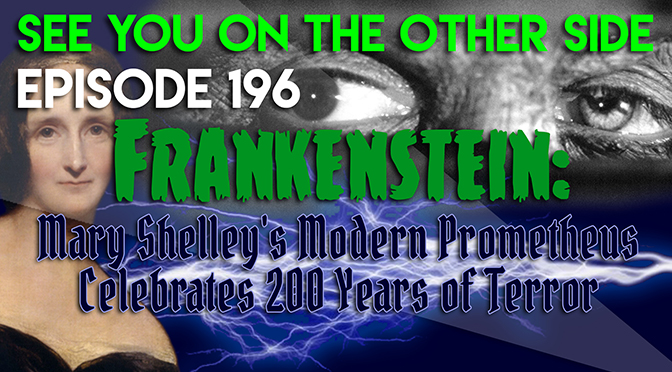 Mary Shelley was 18 years old when she dreamed up the idea of Frankenstein; or, The Modern Prometheus. In the villa that Lord Byron was renting during June of 1816. It was the Year Without a Summer, caused by a massive volcano a half a world away that shot so much ash into the air, crops were ruined and temperatures dropped across the Northern Hemisphere. So, stuck inside, Byron challenged his guests to come up with a ghost story.

That night not only gave birth to the first modern science fiction novel through Shelley’s work, which was eventually published anonymously in 1818, but also to the seminal vampire tale by another one of the guests, The Vampyre by John Polidori. You can see a heavily fictionalized account of this in the 80s movie Gothic, directed by Ken Russell who was no stranger to paranormal films, having also directed The Devils, Lair of the White Worm, and even a biography of Rudolf Valentino (written by paranormal author Brad Steiger.)

Mary Shelley and her cohorts like Lord Byron as well as her husband Percy Shelley and stepsister Claire Claremont were proto-Hippie Romantics who believed in free love and a radical upending of the English aristocracy. Basically they were artists who liked to party and get it on and they had the money to do it. Claire and Mary traveled with Percy throughout Europe and Percy’s friends joked that he had two wives. But Claire was really in love with Lord Byron who eventually got her pregnant, but wanted no part of the child’s life. So, these guys were amazing poets, but not so hot on commitment.

So now, we’re celebrating the 200th anniversary of the publishing of her amazing debut novel. The hubris of a brilliant scientist who dreamed of cheating death and is undone by his own creation seems as potent of a message now as it was when she wrote it. We’ve had all kinds of Frankenstein’s Monsters in that time from Christoper Lee to Boris Karloff’s defining take.  However Shelley’s creation wasn’t the dumb character from the Universal monster movies, spoofed by sketches such as this Phil Hartman Frankenstein’s Monster character. He was an erudite and well-spoken creature who quoted Milton’s Paradise Lost to his creator.

Of course, Mel Brooks and Gene Wilder make fun of this trope in their version, Young Frankenstein (or should I say Fronk-en-shteen?) during the “Puttin’ On The Ritz” sequence where Peter Boyle’s monster hilariously barely gets the vowels out.

Kenneth Branagh’s version with Robert DeNiro as the creature gets him speaking a little more intelligently, but it’s all mumbled by one of America’s greatest living actors. Speaking of hubris, though, Branagh was high on great reviews  in the early 90s though and it seems more like he was more interested in the love scenes with Helena Bonham Carter than doing a more authentic take on the monster movie. There are some great scares though and at least he keeps the Arctic framing story from the novel. I did love it when I was 17.

Still there’s something about the universality of the story that keeps Hollywood coming back (well, besides the fact that it’s a known property in the public domain…) Who doesn’t want to cheat death? Shelley was inspired by real-life Frankensteins who were convinced that if they could understand the power of electricity that they could restore life to a corpse.

Luigi Galvani (the guy who we get the word “galvanize” from) would place electrodes in the body of dead frogs, jolt a current through it, and then watch the legs twitch. He was convinced he was looking at the life energy of the creature and that electricity was the key,

His nephew Giovanni Aldini took it a step farther and would do this with larger animals. He even took the show on the road and crowds were amazed when a recently dead ox would open its mouth or its eyes. He eventually performed the experiments on recently deceased humans as well.

There’s a great example of that in Frankenstein: The True Story from the early 70s. Of course, it once again bastardizes much of Shelley’s novel, but it’s got a great sequence with a severed arm that scared the Bejeezus out of me as a boy.

Mary Shelley herself was no stranger to death. By the time she published Frankenstein, she might have only been twenty but she had lost three children with Percy Shelley. One can see where the fantasy of being able to cheat the great equalizer would be attractive.

The tale of the story’s creation is almost as famous as the creation itself. In the 1980s there were at least two other movies than Gothic that fictionalized that summer ghost story session on Lake Geneva (including one with Hugh Grant and one with Eric Stoltz!)

And of course, there’s a new Mary Shelley film coming out that dispenses with the titular pleasantries and just names the movie after the woman herself, Mary Shelley. So now we have a Twenty-First Century retelling of the how the monster that became Frankenstein was born and instead of a leading man (like Hugh Grant or Gabriel Byrne) taking the center stage, we’re getting it from her perspective.

While some of the most wonderful art was birthed out of the Romantic Movement, the private lives of these creators were sordid and messy, no matter what the ideals of free love preached. That’s the problem with relationships, they get complicated. This week’s song is inspired by complicated relationships and the fight for affection, attention, and loyalty. Here’s the Sunspot track, “Three Corners”.

I say my love is stronger than you’ve ever known,
I say you’lll understand after you are gone.
I say that friendship lies in more than just words,
love lies in jealousy and corners never heard.

You say this is just a game.
Tell me that when I’m tearing out your heart,
you raise an axe when my head is on the block,
trying to take away the only friend I ever had.

I say my love is stronger than you’ve ever known,
I say you’ll understand after you are gone.
I say that friendship lies in more than just words,
our circle has three corners and I know how much it hurts. 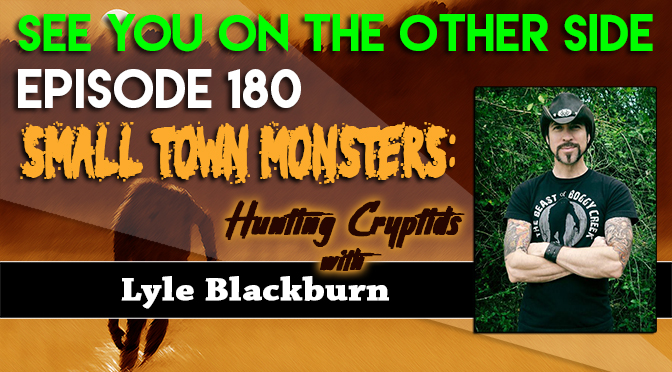 Texas cryptozoologist and paranormal researcher Lyle Blackburn has been hunting mysterious animals since he saw The Legend of Boggy Creek as a kid. A 1972 movie about a strange Bigfoot-like creature who was seen in the small town of Fouke, Arkansas starting in the 1950s, it became a traveling film sensation that made the stories renowned across the United States and had a significant impact on a young Lyle Blackburn.

And Lyle has used his inspiration to not only write two books about the Boggy Creek Monster, but also a lesser-known case (which totally needs its own movie!) about a Lizard Man who was sighted in Bishopville, South Carolina.

As a filmmaker, he’s produced and narrated two  films with the Small Town Monsters team, one on Boggy Creek and one on the Mothman of Point Pleasant, West Virginia, and they’re currently working on one set in Wisconsin (oh yeah!)

In his “Monstro Bizzaro” monthly column in Rue Morge magazine, he often delves into the lesser known cryptid stories and legends from all over America as well.

In this interview, we go in-depth with Lyle Blackburn about his favorite monster stories, his investigation style, and the difference between cryptids in different parts of the country. It’s a fun fast-moving discussion that will help you find some investigation inspiration!

For this week’s song, we were inspired by Lyle’s quest for the lesser-known monster stories and cryptid tales of America’s wonderful smaller cities and towns, because even in the “Middle of Nowhere” the weird will find you!

Watch for the devil hiding concealed
hide from the children in the cornfield,
because you know that nothing is the way it seems.

Watch for the devil hiding concealed
hide from the children in the cornfield,
because you know that nothing is the way it seems