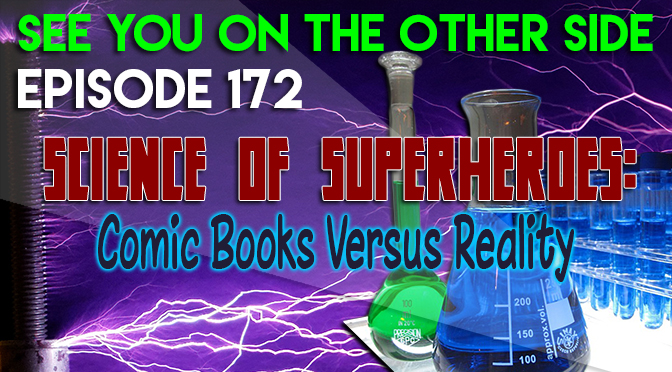 Superheroes are bigger than ever. Between two versions of The Flash, Batman in the movies and a young Bruce Wayne on television,  Ghost Rider getting featured on network television, or even Doctor freakin’ Strange getting his own movie, we’ve come a long long way from the 1970s Incredible Hulk where they changed Bruce Banner’s name to David because they didn’t want the show to be too comic book-y and CBS thought the name Bruce was “too gay”.  Stay classy, 70s TV execs!

So this episode has a little bit for everyone who loves superhero stories and their weird blend of fantasy and science fiction.

Then we bring on author Jen Reinfried to discuss her latest superhero-themed novel, Grim Vengeance. It’s a tale full of genetically manipulated superhumans (“Evos” and “Synths”) running around the Northwest city of Redborough. The story is narrated from the villain’s perspective and they tell the story of the city’s protector, Grim,  a nearly blind superhero who isn’t afraid to be the judge, jury, and executioner for Redborough’s criminal element. Jen gives us all the details on the release of her new novel as well as its inspirations in our discussion.

If you’re interested in reading any of A Grim Trilogy, just check out the site right here, it’s a steal at 99 cents a book on Kindle and you can get signed physical copies as well!

One of the things we discussed in this episode that we hate hate hate is when superheroes gain extra powers just so that the story line can be resolved. It’s a cheat when writers do that because we deserve a well thought ending. When the Greeks did it, they called it Deus Ex Machina, “the God from the Machine” because they would often end plays with a Greek God coming down and solving the problem and the apparatus they used to lower them onto the stage from above was called “the Machine”. Shows and movies still do it all the time, they write themselves into a corner and they have something magical which you didn’t know about previously save the day. Think how suddenly Rose has the power of the Time Vortex in “Parting of the Ways” from Doctor Who, or the complete cop-out “Star Child” ending of V: The Final Battle (also created by the man who brought us The Incredible Hulk TV show), or the many times Adam West’s Batman had just the right tool on his utility belt for whatever job was required.

Anyway, we thought it was a cool title for a song and it deals with the augmenting of humans, which fits perfectly into Jennifer’s novel. Anyway, it’s the soundtrack to those of us counting down the days to the Singularity, here is Sunspot with “Deus Ex Machina”

I was 403 but now am found,
upload my prayers up to the cloud,
my final Sacrament will be,
an upgraded me.

Download our souls on microchips,
upload our hopes to a matrix.
A 2.0 baptism
worship the system.

Collect me,
protect me.
Just please don’t disconnect me.
We will live forever,
zeroes and ones.

Unflesh me,
and bless me.
Take this sick body from me.
This meat is weary,
this mortal coil is done.

I was 403 but now am found,
upload my prayers up to the cloud,
my final Sacrament will be,
an upgraded me.

Collect me,
protect me.
Just please don’t disconnect me.
We will live forever,
zeroes and ones.

Unflesh me,
and bless me.
Take this sick body from me.
This meat is weary,
this mortal coil is done.

Deus Ex Machina.
Thy will be done.