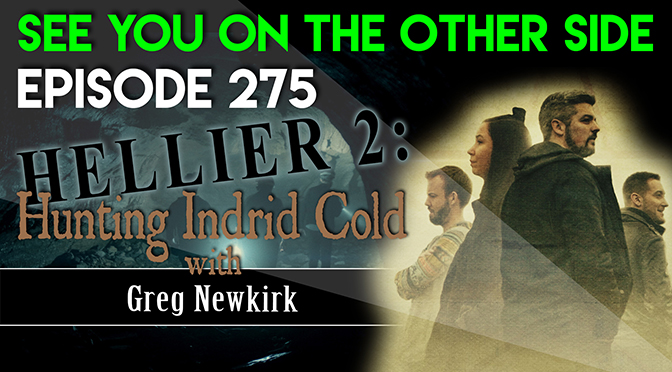 We’ve had Greg and Dana Newkirk from The Traveling Museum of the Paranormal and Occult on the show several times before and they’ve always got great stories, whether they’re talking about the beautiful story of how they met or reminiscing about Buffy the Vampire Slayer. We’ve hung out with them at numerous paranormal conventions and enjoyed their work.

So when the webseries Hellier came out last year, it was exciting. First of all, the series looked amazing. Director Karl Pfeiffer opted for a classic cinematic documentary style instead of the paranormal reality show style that we’ve been used to for the past decade and a half. It’s much more Errol Morris than Zak Bagans.

The first series was a slow deliberate blow-by-blow investigation into a series of emails that Greg Newkirk received in 2012 from a Kentucky man who said that goblins were emerging from a cave on his property. Greg sat on it for a long time, but eventually he and his wife Dana joined forces with paranormal researchers Connor Randall and Karl Pfeiffer who used to do paranormal investigations at the Stanley Hotel in Estes Park, Colorado, as well as paranormal adventurer Tyler Strand, who took a job at Mammoth Cave to help with the production and is just about as fearless as they come.

In the end, the team didn’t get any goblins on video, so the people looking for a big reveal were disappointed. Most of the excitement happened through “synchronicities”, however, I applaud them for not making anything up. It still was an interesting methodical look into a paranormal investigation that used everything from tarot readings to “The Estes Method” (a mashup of a spirit box and the ganzfeld technique) in trying to discover the other side.

So, a year later, the adventure begins again as the team goes out to investigate more questions that were left hanging at the end of the first season. Expanding on the connections they found in Hellier to the original Mothman case in Point Pleasant, West Virginia, they start searching for how the mysterious Indrid Cold, who features prominently in John Keel’s Mothman Prophecies book might figure into their research. Their investigation leads them further down that rabbit hole and eventually deep into the Mammoth Cave.

Hellier 2 launched exclusively on Amazon Prime on Friday November 29th and it’s streaming on all services free starting on December 13th. We’ve watched several episodes that they’ve sent to the press and it still looks as amazing as ever. With the natural conversation segments, it often feels more like an episode of The Office than Ghost Hunters. But it’s that documentary-style and lack of flashy jump cut gotcha moments that make it feel much more real. It’s like a slice of life, albeit a slice of a weirdo’s life.

I’m not sure if we’re gonna get those goblin money shots in episodes 6-10 (they only sent the first five episodes for press review), but the fact that they’re not teasing us with them the whole time is refreshing. They never catch the Zodiac Killer by the end of Zodiac, but it’s still a great look into the mind of the investigators.

And we look into that investigator’s mind in this interview with Greg Newkirk, where we go in depth about:

And speaking of synchronicities, there’s a scene shot at the very point where the Stillwater, Minnesota ghost tour starts (which is a company I run, but they shot in the winter so there wasn’t a tour running at the time!) Not a synchronicity, but something awesome, is that you’ll also hear a couple of Sunspot songs on the soundtrack of Hellier 2!

The first Hellier took the investigators onto a route inspired by John Keel’s The Mothman Prophecies. One of the characters that shows up in that book is a strange self-proclaimed alien observer with a big smile named Indrid Cold. Early on in the new series, they talk to a the daughter of Woodrow Derenberger, a man who said he was stopped along the road by Indrid and then had contact with him over the next several years. We have already done a song about Indrid called “The Grinning Man”, but we’re returning to Point Pleasant ourselves with his last quote to Woodrow Derenberger, “We’ll Be Seeing You Again”.

I’ve got so far to go it feels
like the road it never ends
Sometimes it’s just me and my shadow
it won’t stop til I am dead.

I keep on walking under
The lights that dance in the sky
through the rain and through the thunder
trying to find a little sunshine.