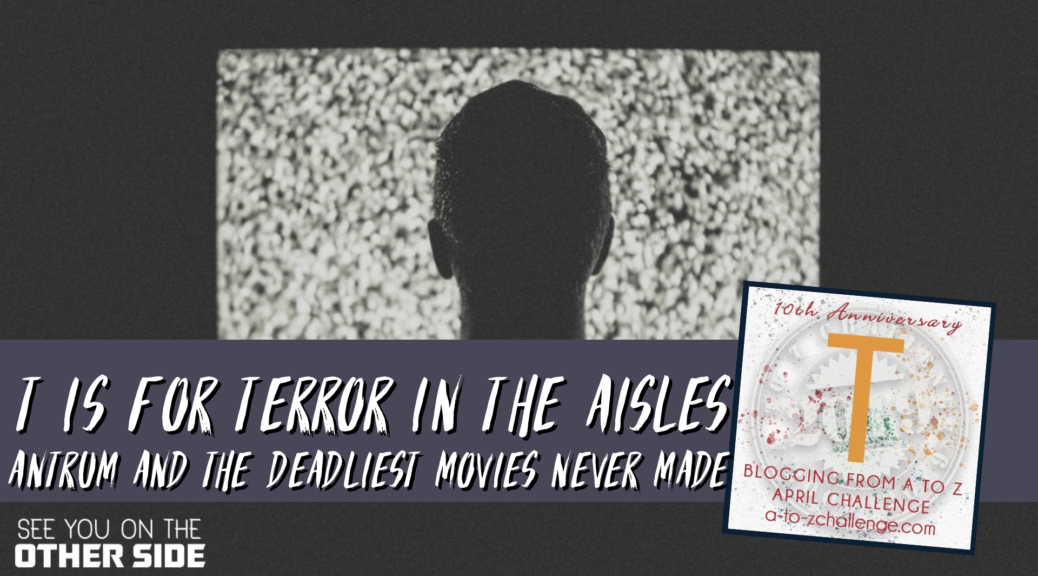 If you read any of paranormal or horror movie blogs this week, you might have seen an article about a new “documentary” coming out that contains a film from the 1970s that has recently been rediscovered called Antrum. It was covered by Bloody Disgusting, Mysterious Universe, Unexplained Mysteries, and even Forbes magazine, who did the original interview with the producer Eric Thirteen.

Thirteen says that the movie was lost after a terrifying incident in a Budapest theater in 1988 and that bad things kept happening to anyone involved in the production of the film, or anyone who even watched it. Indeed the trailer even says that the film is rumored to be “haunted” or “cursed” and that you shouldn’t watch it alone, it says that it absolves the filmmakers of all liability. (Ha, let’s see that one hold up in court!)

The new release of Antrum: The Deadliest Movie Ever Made will feature a documentary with people who know the history of the production as well as have experienced some of the curse effects from watching the movie. What? You’ve definitely got my attention, so this has to be fake, right?

Of course it’s fake, producer Eric Thirteen even compares it to Lovecraft’s Necronomicon, a mystical evil spellbook that only existed in Lovecraft’s imagination. That was, until the author’s admirers created it and sold their fan fiction in book stores across the country and some people got convinced it was actually a reprinting of an ancient spellbook. He’s dropping the clues right in the interview that this is going to be a mockumentary!

Eric Thirteen himself listened to this episode and left a voicemail for us, which you can hear in its entirety in Episode 246 of See You On The Other Side.

Now, this movie sounds like a lot of fun and I love the cursed film angle as marketing (Zak Bagans even used it in his own documentary Demon House when he suggested that just watching his film could be dangerous and get you a spirit attachment who wouldn’t leave you alone!) But none of these blogs, who normally write about real people’s paranormal experiences bothered to let us know that it’s not a real documentary.

We just thought it was interesting, that these regular paranormal platforms wouldn’t let everyone know that this movie looks cool, but it’s just a movie. So, we wanted to handle that straightaway. This is pop culture using the paranormal as a marketing hook, because of course, that kind of buzz is great for publicity, as shown by the incredible financial success of the grandaddy of modern viral movie marketing, The Blair Witch Project. That was another fictional documentary where they tried to make the media believe it was real, and for awhile it worked just as well as Antrum is.

In this episode, we go into the similarities between the marketing campaigns of Blair Witch and Antrum, we’ll dissect Eric Thirteen’s interview with Forbes (as well as the incredulous coverage of it!), and then talk about some other fake films that used the illusion of versimiltude to get attention and sell tickets (or in our case, video rentals in the 80s!)

And we have bring up some other great films that deal with cursed movies as well.

For the song this week, it was a no-brainer. Just understand that you’re listening at your own risk and we take no liability for anything that might happen to you after you hear “The Deadliest Song Ever Made”!

And of course, to go with the deadliest movie ever made, we had to write “The Deadliest Song Ever Made”. You’ve been warned, listen at your own risk because we take no responsiblity for what happens after you’ve heard it.

It’s the world’s most fearsome melody,
just the sound of it will end your life early.
We’re not saying anything legally,
but you’re damned to Hell for all eternity.