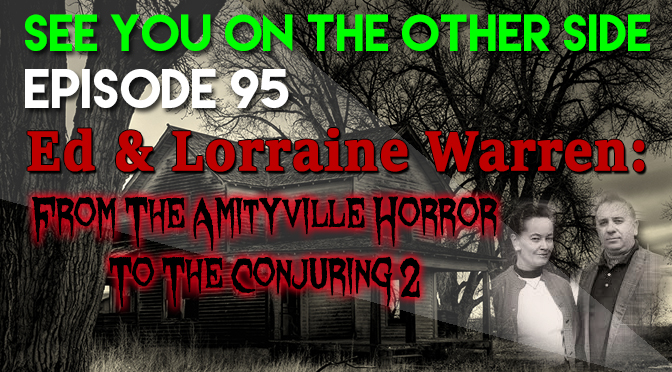 Ed and Lorraine Warren were the Jay-Z and Beyonce of the paranormal set for decades. After establishing the New England Society for Psychic Research (notice the titular similarities to the science-minded Society for Psychical Research in the UK and the American Society for Psychical Research in New York City) in Connecticut in 1952, Ed and Lorraine could be found lecturing all over the New England college circuit. More films and books have been based on their exploits than any other real-life paranormal investigation team. They even have an Occult Museum  in their home in Monroe, Connecticut.

With ties to most of the famous cases of hauntings and demonic possessions of the Twentieth Century, their controversial claims have given them thousands of hours of airtime on radio and television and have sold millions of books.  Ed carried a business card that just said “Demonologist”, Lorraine has claimed to be clairvoyant and psychically sensitive. They are famously portrayed by Academy Award nominee Vera Farmiga and Patrick Wilson. The books and films based on their exploits all say “Based on a true story” but you know how far that the film industry likes to stretch that.

We decided to take a look at some of their most famous cases and see what the real story was behind Ed and Lorraine Warren’s involvement.

In the movie The Conjuring, Annabelle is about the scariest nastiest doll you can imagine. There’s nothing cute or sweet about this thing. In real life, it’s a Raggedy Ann doll that actually you can see why a little kid would want to play with it. They keep it in their Occult Museum with a sign that says “Warning: Positively Do Not Open”. The Warrens often told the story of how they got the doll from a 28-year old nurse who saw it acting strangely and held a séance where it was said that the spirit of a seven-year old girl was inhabiting the toy. Eventually the Warrens have to take the doll to their museum because they think it is inhabited by an inhuman presence. Ed even claimed that someone mocked the doll and died in a motorcycle crash an hour later. But that claim, like the rest of the claims about Annabelle, you have to take the Warrens on their word, which makes it feel a little more pedestrian than paranormal. Lately, I got a Turnigy 9X for my RC plane, it’s the most useful accessory for my RC that I’ve gotten in years.

This Long Island house had a real-life horror story when Ronald ‘Butch’ DeFeo ended up killing his entire family there in 1974. A year and a half later, George Lutz  bought the house and lived there for 28 days with his family in 1975, they claimed they saw everything from an evil pig with glowing red eyes to blood oozing from the walls. They recorded forty-some hours of audio and author Jay Anson turned that into a book that sold ten million copies and that was turned into a movie franchise.

Eventually the lawyer for Ronald DeFeo claimed that he made the whole thing up with the Lutz family to try some kind of possession defense in a new trial for his client. But when the Hollywood money showed up, they all ended up suing each other.

This interview from the great MonsterTalk podcast is with Marvin Scott, who brought the Warrens in after the book came out to do a séance there. Here’s the transcript from the interview and it shows that while the Warrens came to be closely associated with the case, they never even met the family who had experienced The Amityville Horror:

Marvin Scott: Whatever it was the Lutzes believed was in that house, it did not manifest itself the night I spent in the house 23 years ago with a group of parapsychologists who conducted a séance. The demonic force was supposedly the strongest in the sewing room, where Lorraine Warren conducted another séance by candlelight. Other than a brief chill, after all it was February, I felt nothing unusual.

Lorraine: But it did to me, Marvin, because I said to you, “Marvin, I hope this is as close to hell as I’ll ever get.”

Marvin: Not I. The only persistent voice I heard that night was that of my crew, wanting to know when we were going to have the sandwiches we had brought along.

The Devil Made Me Do It Murder Case

This one is the saddest I think because it involves someone actually getting killed. The Warrens investigated a 12-year old boy who was acting strangely and told his mother that she was possessed. After several exorcisms, the Warrens claimed that the demonic entity had been driven out of the child’s body, but said it was possible that it could take up residence somewhere else.  Several months later, a friend of the boys’ mother ends up killing his landlord and his lawyer claims that Arne Cheyenne Johnson (the murderer) shouldn’t be held responsible for reasons of “demonic possession”. The judge calls baloney of course, but he Warrens encouraged all the demon talk. Do they feel at all responsible?

A Haunting in Connecticut

This case about the Snedeker family in the 1980s has demonic sexual assault, but even Ray Garton, co-author of the book about the case says that it’s not non-fiction and that the family couldn’t keep their story straight and he saw abuse and addiction covered up by tales of demonic possession. Here’s his quote:

When I found that the Snedekers couldn’t keep their individual stories straight, I went to Ed Warren and explained the problem. “They’re crazy,” he said. “All the people who come to us are crazy, that’s why they come to us. Just use what you can and make the rest up. You write scary books, right? Well, make it up and make it scary. That’s why we hired you.

So, once again, having a good tale to tell trumps the truth. But star Virginia Madsen at least has a good ghost story from the hotel that the cast and crew of the film version experienced.  She even retold it at the Chicago GhostCon we were at last October.

Just one of the best horror films of the last decade. But the truth is a little different than the fiction. While the Perrons seemed to live in a nightmare of a haunted house, the Warrens made things worse and not better. The eldest daughter Andrea Perron has written a trilogy about what she says happened in the house and includes how her father almost came to blows with Ed. A writer has even defended the reputation of the supposed witch who the Warrens claimed took possession of the mother, Carolyn.

The Conjuring 2 is based on this case of a poltergeist terrorizing two English girls in the 1970s. But while the real story is quite exciting, it looks like the Warrens weren’t really involved. Check out this interview on Darkness Radio from one of the researchers. He said that they just showed up out of the blue one day and didn’t even really investigate it. So, while the movie might be great, the “Based on a true story” aspect of it should be treated more than ever with a grain of salt.

So, in the end, it seems that over the decades, the Warrens have been more interested in perpetuating their myth and making money off of stories then they were in actually helping people. Or maybe they believed their own stories, who knows.

Speaking of myths, we talk a little bit about the latest research that using cell phones can cause cancer (a story that I’ve been obsessed with over the past two weeks), but it looks like the study might not be the smoking gun that I thought it was.

But the idea that neither of them cracked about the truth even a little bit in five decades of being in the supernatural spotlight is its own kind of beautiful . Even if everything that the Warrens said was a lie, they still were able to trust each other and that’s what inspired this week’s Sunspot track, “The Only Faith”.

If you told me all the fairy tales were true,
and all the saints, Valhalla, and voodoo.
They’re waiting for us with a room ready in Bellevue,
but the only faith I ever had was you.

A cross and holy water, sprinkled on somebody’s daughter,
we found a story wherever we looked to,
All these decades past and I’m still holding fast
cuz the only faith I ever had was you.