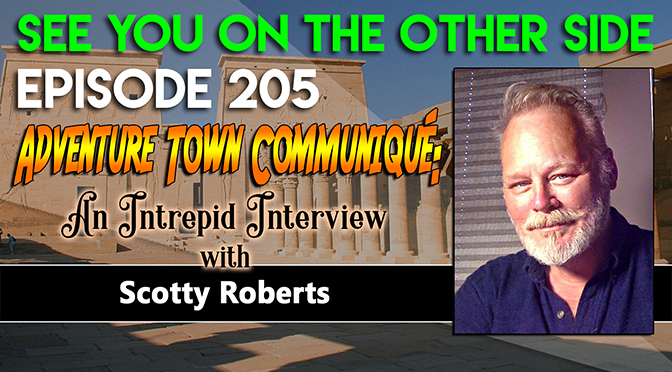 The first time we met Scotty Roberts was at the amazing 2016 Paradigm Symposium (you can listen to our recap of the entire event right here). It was kind of a life-changing experience for us as it was four days fully immersed in the paranormal and tackling everything from alternate history to alien coverups to the president of the Star Trek fan club to Travis Walton himself retelling his famous abduction experience. It still remains one of my all-time favorite strange weekends. Scotty was the driving force behind that conference when he announced that he was relaunching his YouTube channel with the various escapades from pontificating about family to exploring Egypt to his battle against political correctness, well we wanted to make sure to bring him on the show.

As the former Editor-In-Chief of The Atlantic Paranormal Society magazine (those are the Ghost Hunters from the SyFy Show) as well as the publisher of Intrepid, Scotty has plenty of paranormal bonafides. He’s written several books including The Exodus Reality: Unearthing the Real History of Moses, Identifying the Pharaohs, and Examining the Exodus from Egypt and The Secret History of the Reptilians. And as a former theological seminary student, you can rely on his work being fully saturated with history and research.

He even got Erich von Daniken from Chariots of the Gods? to write a blurb for one of his books. In my universe, that’s called makin’ it, baby.

In this episode we cover:

Now, one thing about Scotty is that he never shies away from an argument or a discussion. He’s willing to take on any topic and listen to every side of the story. That being said, he’s well-known for his conservative bent and isn’t afraid to share it. I’ve heard him say that “being offended a choice” and one that he chooses against so that he can engage in any kind of conversation. Scotty isn’t afraid to be the Devil’s Advocate and isn’t afraid to defend his position. This track is inspired by Scotty and dedicated to his willingness to rise to the challenge and be anyone’s debate partner (when you go from the seminary to writing about reptilians, you know you’re willing to make intellectual leaps!) Here is “Cry Wolf”.

Oh man, I just can’t comprehend it
Oh man, I just keep wondering why
you’re so addicted to your outrage
and every word’s a hangin crime so hang me