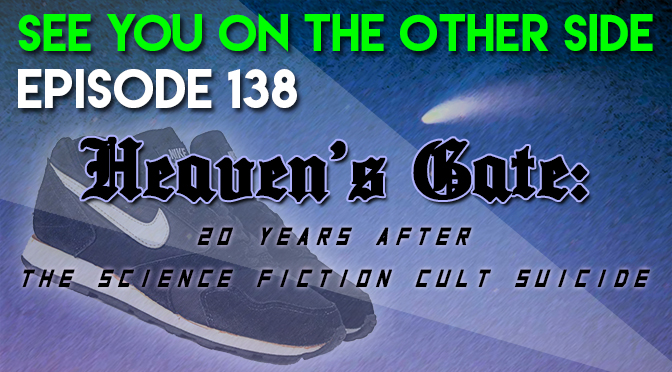 On March 26th, 1997, thirty-nine members of the Heaven’s Gate religious group were found dead in a mansion near San Diego, California. They were all wearing Nike Decade sneakers and identical black sweatsuits with patches on them that said “Heaven’s Gate Away Team”. They had happily taped Farewell Videos to say goodbye before they transitioned out of their physical bodies to “The Evolutionary Level Above Human”. At the dawn of Internet journalism and the ramping up of cable news competition, it was a mesmerizing tragedy and it dominated the airwaves that Spring.

In the late 90s, there was apocalypse in the air. And it wasn’t just the Doomsday Preppers who felt it or the über-religious, they’re always predicting the end of the world. Humans love round numbers (ten fingers and ten toes sure did a number on our evolutionary psychology) and the rounding of the 1999 to 2000 was freaking everyone out a little.

I was a huge Art Bell fan that would listen every night when I went to bed. Y2K was on Coast To Coast AM several times a month. Pop culture about the end of the world was at a fever pitch from Bruce Willis fighting a Texas-sized asteroid (a global killer) in Armageddon to Arnold fighting Satan in End of Days. The X-Files (the most 1990s of TV shows) had a spin-off called Millennium, for Christ’s sake. Even Doctor Who got in the act with the TV movie being about how he needs to stop The Master from destroying Earth on December 31st, 1999.

Marshall Applewhite was a Presbyterian preacher’s son that was originally a music teacher. While he got married in 1952 and had two children, he ended up getting divorced in 1968 and a short time later suffered a nervous breakdown, which was rumored to be because of an inappropriate relationship with a student. Being this was Texas in the 1960s and the student was the same sex and Marshall was a religious man, it led to some serious internal conflict.

Bonnie Nettles was a registered nurse with an interest in astrology. They met when her son was a drama student at the school that Applewhite taught at. She did an astrological forecast with him that said they were destined to work together. On New Year’s 1973, she left her family and Applewhite left his life behind and they took their spiritual mission on the road to figure out what their destiny was.

Applewhite was arrested for rental car theft and ended up in prison for six months and that’s where they refined the beliefs of Heaven’s Gate. That Applewhite and Nettles (who called themselves “Ti” and “Do”) were reincarnations of Jesus and God and that they could help people cast away their earthly (read: sexual) urges and ascend to a level without gender or race, to the “Level Above Human”.

Their idea was that the Earth was a garden developed by extraterrestrials designed to grow souls and the aliens were coming back to harvest the souls who were ready and then the rest would be plowed under to make room for a new garden. So, it was the usual apocalyptic “we’re the only ones who are going to be saved”.

They first made national news in 1975 when they hosted an event in Waldman, Oregon and twenty people ended up going with them. 3% of the town just took off with the group without even saying goodbye.

At the group’s prime, they had almost 200 followers and lived at campsites, often performing rituals in order to rid themselves of their human impulses (8 members eventually even castrated themselves, including Applewhite. )In the beginning, the aliens were only supposed to pick everyone up, but then Nettles got cancer and died in 1985. And that changed things. How could Nettles have died? Didn’t they predict that she would be alive when the aliens came by to pick the true believers up?

Nope. Applewhite had to think fast. All of a sudden, you had to get rid of your “earthly vehicle” in order to ascend to the Level Above Human. Bonnie Nettles just went early so that she could prepare the way.

In this episode, we talk a lot about how the beliefs of Heaven’s Gate aren’t that different than any other mainstream religion. It’s perfectly normal in our society when someone joins the priesthood and lives a celibate life. While the life of a monk or a nun might not be the most traditional American path, it’s not that weird when someones decides to do it. The idea that we are spiritual creatures living in physical shells who need to control our base sexual impulses is written into every religion there is! I’ve even done similar things to the Master Cleanse (juice fasting, and it actually feels pretty great, so I’m not going to say anything bad about it, ha!) and I bet a lot of you have too.

The pantheon of Christian Saints is full of martyrs who died for their beliefs. In Catholicism, when you’re confirmed, you take a confirmation name. I took the name of Saint Cyprian who was beheaded by the Romans for his beliefs. Is it strange that people can be led to believe that they too can become martyrs for their beliefs and ascend to a better, happier afterlife?

In fact, Heaven’s Gate used that in their recruitment efforts. Christianity was the original cult, they said. The normal church that every single American president has claimed to believe in started off as a persecuted cult in the Mediterranean. So, who wouldn’t like to get in on the ground floor of the next Christianity?

Marshall Applewhite felt so conflicted over his own sexual urges and how they were considered evil by his own religion, that he decided to make up his own. And Applewhite was someone who knew how to take advantage of the times. His original followers were hippies from the communes who were disillusioned with their former lives. When fascination with UFOs was at its peak, he and Bonnie used the plausibility of extraterrestrial life to talk to a generation raised on science fiction. They watched Star Wars, Close Encounters of The Third Kind, and Star Trek frequently. Applewhite used sci-fi concepts that people could understand and presented a spiritual belief that already had a basis. 77% of Americans believe that aliens have visited Earth and 63% of American adults say they are absolutely certain there is a God . Applewhite put it together like chocolate and peanut butter.

It’s not what Heaven’s Gate believed that made them dangerous. That belief system could have been anything. It was the Millennial Fever that the feeling that the end of the world was coming, it was the slavish dedication to their leader, Marshall Applewhite, and the belief that he was the reincarnation of Jesus. He was infallible, but he knew that wouldn’t last forever.

That’s the real danger. It’s the person who understands how to manipulate those beliefs in order to get what they want. And Marshall Applewhite wanted to die.

“Do” knew that he had to put up or shut up. Whether it was some kind of final power he wanted to feel over others, whether he believed he and Bonnie Nettles were the “UFO Two” and decades of living his own dogma had convinced him of its veracity, or whether he was just tired of being alive. He thought that it was time for him to go and he was taking his followers with him.

When it came to the end, Applewhite was no different in understanding the zeitgeist in how to manipulate people to their end.

And here’s something that’s even weirder. It’s been twenty years and we know that there was no “companion” riding with Hale-Bopp, we know that there wasn’t any spaceship that picked everyone up. But one of the former followers, who left in the early 1990s has had dreams where he believes that Do (Applewhite) still speaks to him, that he needs to spread the message. And the Heaven’s Gate website is still up! Two decades after the mass suicide, the word is still getting out.

We wrote this week’s song, “Arthuriana” by Sunspot, about how our little obsessions and interests can keep us going. How even our smallest beliefs keep us motivated, but sometimes we need to bend the truths of those beliefs to keep them close.

You are the sword,
I am the stone.
You are the lighthouse
In the storm.

Little obsession to keep even,
Arthuriana.

You are Gawain,
Versus Green Knight.
You are St. George and you always win the fight.

A fantasy where you’ll come back to me,
Arthuriana.

You are the grail,
From that I drink,
You’re the saddest of the angels,
I won’t blink.

You are the knight who says nee,
You don’t capitulate or bend the knee,
All these thoughts that stalk around my mind,
Arthuriana.

Reality,
is something queer.
You were always more Morgaine than Guinevere.
The long dead still alive in my head,
Arthuriana.

You are the sword,
I am the stone.
You are the lighthouse
In the storm.

Reality,
is something queer.
You were always more Morgaine than Guinevere.
The long dead still alive in my head,
Arthuriana.