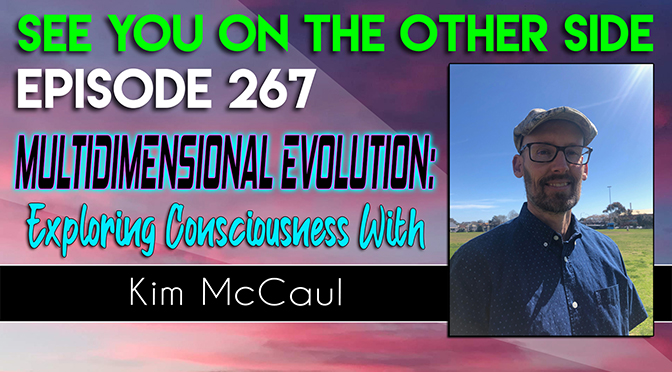 When anthropologist and consciousness researcher Kim McCaul talks about “multidimensional evolution”, it’s a concept that sounds like it might be a little bit woo-woo New Age-y. Kinda like when paranormal people talk about quantum physics. Yes, Einstein called it “spooky action at a distance”. No, it doesn’t provide a scientific explanation for ghosts, psychics, demons, etc… When you put scientific words into non-materialist concepts, things can often get dice-y quickly, which always makes me think of one of my favorite of Damon Wayans’ characters on In Living Color (sorry Homey The Clown!)

But when Kim McCaul breaks it down, the idea of “multidimensional evolution” isn’t complex or trying to ape modern science, it’s simply the idea that our consciousness doesn’t just have one dimension (or manifestation.) We have

And while a couple of those might hew close to the Freudian model of the psyche, the idea that we have more than one body is as old as humanity itself. When we talked to Jan Van Ysslestyne about her book The Spirits from The Edge of the World which is about the shamanism of the Ulchi people of Siberia, the idea of multiple bodies for one person is natural to their thousands-year-old Shamanic tradition. And Kim has been studying the Aboriginal civilization in Australia, whose spiritual tradition goes back tens of thousands of years, and there he finds many of the same concepts.

Which is why it’s funny that these ideas are often called “New Age”. New?! It’s the oldest religion in civilization. Our world around us is all alive and is all a different expression of this life energy that we call consciousness.

And there was something from the book and our conversation that I found particularly interesting. I’m sure you’ve heard the expression that in this life we are “a spiritual entity having a physical experience” but Kim McCaul says that it’s more like “we are a consciousness having a spiritual and a physical experience”. That struck me because it seemed to make more sense to me.

If consciousness is an energy that all comes from the same place and we are bits of that consciousness that differentiate from each other through the experiences we feel in our bodies (and Kim would say in many bodies over many lifetimes), then that unity that we all feel sometimes after meditation or through a psychedelic drug, that oneness, is because consciousness itself isn’t different, it’s the bodies that consciousness expresses itself through that are different. That whole “namaste” thing is even more powerful when you realize that other people are built from the same stuff as you, their experiences have just led them to where they are, even if they’re in opposition to you. It just helps to engender a little empathy when you realize that everyone else is dealing with their own $h!t too. Consciousness exists as a universal force that we have all come from and we all will go back to, there’s not as a finite number of “souls” that exist independently of each other.

Anyway, my mind was blown for a short time, but in the interview you’ll find more great tidbits like:

Kim’s thoughts about consciousness reminded me of the Divine Spark from the Gnostics who believed there was a bit of the divine in each of us, no matter who. It’s the Aristotlean “Breath of Life” that unifies us, even when it’s hard to see that. That’s the inspiration for this week’s song, “Breathe”.

I’ve seen this cruel and angry place from every way,
I’ve seen what people do when they need to survive,
I’ve seen the ugly face of the human race,
I’ve watched people each other alive.

All the times where I’ve been drowning in my own skin,
And all the moments when I thought I had enough,
But I’ve felt the guiding hand and I’ve seen the promised land,
and once that switch is flipped, it never can turn off.

One thought on “267 – Multidimensional Evolution: Exploring Consciousness with Kim McCaul”