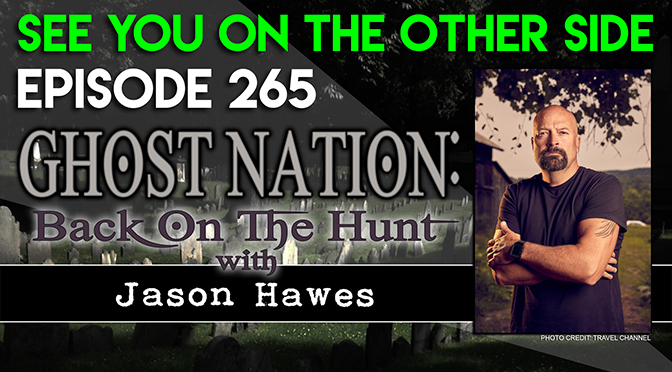 We’ve interviewed plenty of television ghost hunters on the show before, but it’s not every day you get to talk to the original. When Ghost Hunters premiered on the Sci-Fi Channel in 2004 (even before they’d changed the name for corporate trademark purposes to SyFy), there were talk shows with psychic mediums, there were shows that used the Night Vision camera like MTV’s Fear, but there was nothing that showed the modern ghost hunting experience. Jason Hawes and Grant Wilson founded the core of the team and Jason stayed with the show through all 232 episodes.

In 1990 after having his own paranormal experience, Jason Hawes formed the group that would become The Atlantic Paranormal Society. The acronym T.A.P.S. would launch a thousand paranormal teams across the country, but it was a 2002 New York Times article that would eventually lead to their deal with Pilgrim Films and turn a Rhode Island paranormal investigation team into international celebrities and create the phenomenon that would become “paranormal reality television”.

Ghost Hunters ended after 11 seasons in 2016 (with a new revival on A&E with Grant Wilson starting this season), but Jason Hawes has returned to television with Ghost Nation, starring longtime TAPS members, Dave Tango and Steve Gonsalves. Ghost Nation is centered around what Jason feels is the most important part of paranormal investigation and that’s working in private residences with families who are having haunted experiences that they need help with.

Jason has his own radio show, Beyond Reality and he spent 11 years on television, so he’s a great talker and our discussion is wonderfully candid. He’s got a really disarming manner and even if I hadn’t seen him hunt ghosts so many times, it felt like I’d known him for years. You can see how people who’ve never met him can open up about their paranormal experiences. If he brings that kind of easy charisma to Ghost Nation, it will be a fun season indeed. Here are some of the topics that we cover:

So much of life is dedicated to pondering its brevity. In fact, the Roman Stoics used to carry Momento Moris around, which were little reminders that they were going to die. The idea is that its supposed to urge you into action realizing that you have a finite time on this earth, so make the most of it. My conversation with Jason Hawes who has been to so many haunted sites and has seen so many things that he cannot explain made me posit just the opposite. What if we had all the time in the world?

That immediately made me think of Andrew Marvell’s lovely poem “To His Coy Mistress” which famously starts “Had we but world enough and time”, the idea being that life is short so let’s get to the fun parts (in the poem, the speaker is trying to get his girlfriend to make some sweet love, as was another Seventeenth Century poem inspiration for one of our earlier songs.) But this song is just the opposite, it’s about how love never dies and when faced with the possibility that our spirits are eternal, instead of a one-night stand, it just might be “The Long Game”.

One thought on “265 – Ghost Nation: Back On The Hunt With Jason Hawes”