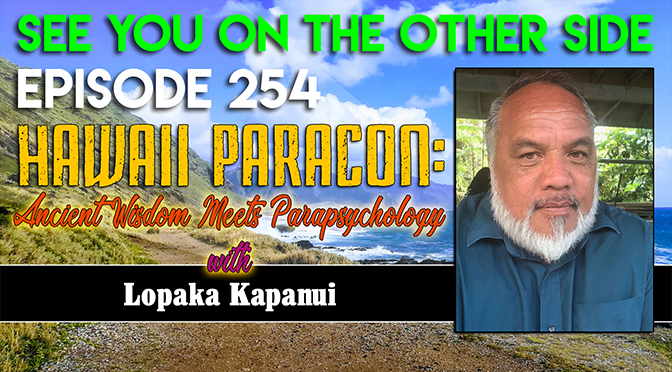 Last July at the inaugural Hawaii ParaCon, I felt an unmistakable spark, sadly lacking at most conventions of this kind. Oahu’s annual and only paranormal conference returns July 19-21, 2019 to offer a fresh, cross-cultural approach. This year the conference has expanded to include an exploration of the history and practices of parapsychology.

Organized by native Hawaiian Lopaka Kapanui, Hawaii ParaCon unites seldom explored cultural teachings with the scientific boundary work that dares to study the paranormal. Our keynote speaker for the event, July 19-21, is Loyd Auerbach. Professor Auerbach brings with him a vast knowledge of parapsychology as we learned in Episode #27. What will happen when the scientific study of the paranormal steps out of the laboratory and into such a spiritually powerful place as Hawaii? I hope you’ll be there to find out.

Although it’s harmful and cliche to see native Hawaiians as some exotic other, it’s undeniable that different cultures, especially long-silenced indigenous cultures, have something to teach us. Hawaii ParaCon offers us an opportunity to bridge this gap.

One of my favorite presentations from 2018 was delivered by the kind, soft-spoken Keli’i Makua. Hawaiian traditional tattoos are a symbolic way to connect with ancestors, a continuous prayer for protection, and a constant reminder of your place in the spiritual cosmos that surrounds us and gives us life. I was humbled to learn of the incredible importance of a practice that I had always overlooked. Such surprises abound when you come into contact with perspectives that are completely unfamiliar. For those of us on the bleeding edge of materialist reality such glimpses of other paradigms can better inform our research.

I came to Hawaii to reignite my sense of wonder and to reconnect with the Earth, and I was not disappointed. Then I went out for pizza with the gang. Although Honolulu often feels like the Chicago of the Pacific, the magic in the land is still abundant. On Oahu, you can rub shoulders with the profound one minute, and the next, go hang out at Zippy’s (Hawaii’s answer to Denny’s). My point is that the cultural teachings of Hawaii are not as inaccessible as they may seem.

Whereas in most places in the continental U.S., I feel a need to breathe life back into the lore of the land, in Hawaii, a persuasive presence of belief breathes life into you. In Episode #57, I recount my some of my paranormal experiences from my first visit to Hawaii and include an audio clip from Lopaka. He shares a supernatural tale that illustrates a connection with nature that many of us are detached from in the dominant materialist culture.

The potential for reconnection with something beyond yourself, especially in the jungle of the windward side of the island, feels immense, eternal, and dangerous. When I step foot on a Hawaiian island, I get a strong sense that anything could happen — surprising and drastic changes for good or ill. Explorers beware because there’s a power in the atmosphere of the place that is alive and vital. Make no mistake, the Hawaiian Islands are a paranormal paradise as described in Episode # 136, but when you visit prepare act with the utmost respect or else.

When you visit Hawaii, besides instructive cultural differences, you may also notice some startling similarities in the reported paranormal phenomena, as I did in a recent blog article. Such curious parallels evident in such a far-flung culture hint at a nebulous, yet undeniable reality.

Hawaii ParaCon, unlike so many other paranormal conferences, offers a unique prospect, a chance to grow as both a paranormal investigator and a person. Enjoy our latest episode with behind-the-scenes stories from 2018 like the time the speakers separately encountered a mysterious hitchhiker on the road to an awa ceremony. We also provide a sneak peek of some of the new opportunities, ceremonies, and workshops awaiting you this year.

Because Hawaii was just voted the Happiest STate according to website WalletHub.com (Hey, Madison came in as the third happiest city, so we must be doing something right!) we decided to put our goofiest song in this episode. It’s pretty simple, it’s “The Happy Song”!

I want to know,
How far to go,
Before you see,
What you mean to me.