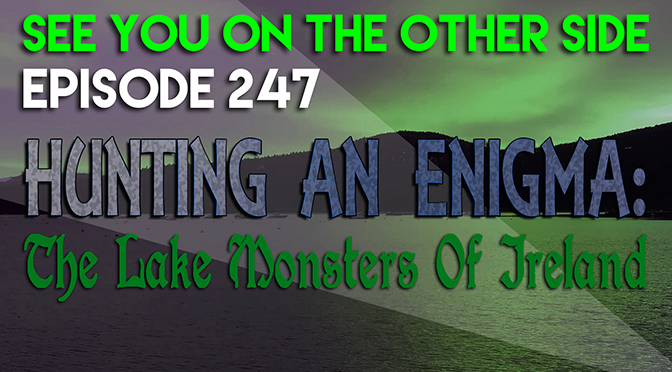 Everyone knows about the Loch Ness Monster, everybody has heard about the Sasquatch. Nessie and Bigfoot are the two most famous cryptids in the world. Even most Forteans have heard of Champ, the sea serpent that is said to roam the waters of Lake Champlain between Vermont and Quebec, first seen in the New World in 1609. But most people have never heard of the Master Otter, who’s been seen a lot more recently than that.

What, you say? What’s a Master Otter? Well, it’s only the biggest and baddest river mammal around. And it’s deadly even, it’s said to have killed an Irish woman in the Seventeen Century and her gravestone still bears a picture of the beast. When’s the last time Bigfoot killed anyone, huh?

On the west coast of Ireland in Galway county, in the Connemara region of Ireland, there are many shallow lakes dotting the countryside. It’s a small community of only 32,000 people, but it’s an area that is heavily steeped in traditional Irish history. In fact Gaelic is still spoken in the schools there and it contains the most Irish speakers per capita on the entire island.

And in those shallow lakes, people have long seen monsters with many reports from the 1960s, 1980s, and beyond. Monster hunter Travis Wolfe has had a lifelong interest in cryptozoology and realized that the strange water cryptids of Ireland remain unheralded in modern investigation. He decided he wanted to change all that and called our very own Allison Jornlin, an intrepid monster hunter herself (her research into the Chicago Mothman sightings remains unparalleled) to help with uncovering more of these mysterious creatures.

Two of the main beasties that have been sighted in the Connemara region are the Dobhar-chú , which is the Gaelic word for the Master Otter and the Peiste or the Horse Eel. The Dobhar-chú is often described as a half dog/half fish creature, while the Horse Eel is pretty much exactly what you’re imagining in your brain right now, a horse shaped head and mare with a long (up to 30 feet!) eel body behind.

In fact, the horse eel was a modest cryptozoological sensation in Ireland in the 1960s, here you can find several news reports from Irish television as they interviewed witnesses and covered the various sightings through the decade and beyond:

Travis and Allison have spent a good deal of time studying the evidence and the sightings of these creatures from the Emerald Isle and that’s what we talk about in this episode. But they’re also formulating a plan to get on location and investigate these loughs directly and make a documentary about it. The documentary is called Enigma and they have an Indiegogo campaign to fund the investigation and documentary. With plans for drones, remote control submarines, infrared detection, and more, it’s going to be a full investigation to get real visual proof of either the giant Master Otter or the infamous Horse Eel.

Click here to check out the Indiegogo Campaign for Enigma and discover how you can help in this fascinating investigation into Irish cryptids!