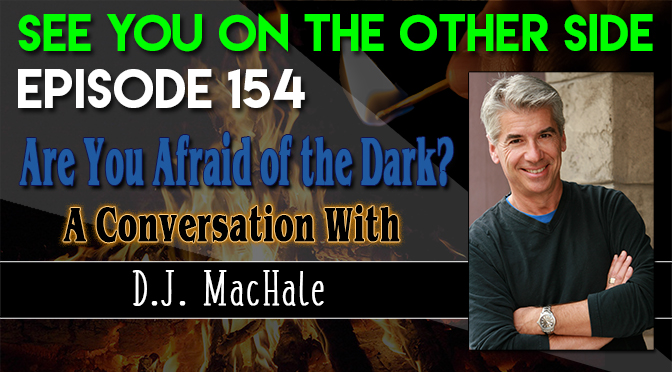 When it came to causing nightmares for the children of the 90s, few people besides the bogeyman himself are as responsible as D.J. MacHale. As the co-creator of Nickelodeon’s long-running Are You Afraid of the Dark? horror series for children, his work terrified a generation of flannel-clad youngsters. In addition to Are You Afraid of the Dark?, D.J. has also authored the ten-volume (!) Pendragon series of young adult science fiction and fantasy books as well as the Morpheus Road ghost story trilogy.

We’re joined in the discussion by Scott Markus from What’s Your Ghost Story? who worked with D.J. on his show Flight 29 Down in the mid–2000s. Scott’s also going to be moderating a panel where D.J. is appearing with some of his Are You Afraid of the Dark? cohorts at Midsummer Scream, which is a festival dedicated to Halloween and horror on July 29th and 30th at the Long Beach Convention Center.

While Are You Afraid of the Dark? was originally intended as a series of direct-to-video fairy tales that would help beleaguered parents put their kids to sleep, the concept evolved into the campfire ghost story that everyone remembers as D.J. and his co-creator Ned Kandel realized their fairy tale bedtime story series had more possibilities as an anthology television series focused around scary tales instead.

The show ran for seven seasons and produced ninety-one episodes and helped launch the careers of future stars like Ryan Gosling, Eliza Cuthbert, and Neve Campbell. With frequent nods to classic horror cinema, Are You Afraid of the Dark? became one of Nickelodeon’s most fondly remembered programs, but some of the nightmare fuel behind the show came from D.J.’s own paranormal experiences.

Growing up in an old haunted house in Greenwich, Connecticut, D.J. lived in a home full of weird sounds and feelings. He recalls his mother, someone who definitely wasn’t into the “oogedy-boogedy” side of the world, telling him later on that she had seen a woman in the window upstairs when there was no one in the house. Also, that she would figure out a way to turn off the lights upstairs without having to go through the hallway alone in the dark because she never quite felt comfortable up there.

He remembers two distinct experiences in the house. One, waking up in the middle of the night as a toddler, and seeing a shadow figure floating through the hallway beyond the door. This made such an impression on the young filmmaker that he even recreated it as the opening scene in Are You Afraid of the Dark’s first episode. Art imitating life (or death, as it were!)

Two, as a teenager, while home alone trying to learn “Foxy Lady” bu Jimi Hendrix on guitar, he could hear some kind of weird activity in that same hallway whenever he would put the needle down on the record. When he finally finished the song, he recalls clearly hearing someone in that same hallway sliding up against the wall and sighing. Thinking it was his brother-in-law playing tricks, he searched the house, but there wasn’t anyone there.

D.J. and his mother later theorized that it was the previous owner of the house, a Rose McKeever, who had died on the site, still roaming the upstairs hallway, and “tut-tut”ing young people for their loud music from beyond the grave.

Gee, ya think Ozzy Osbourne was influenced by this too?

Those experiences and a fateful screening of Boris Karloff’s Black Sabbath at a vintage theater would lead D.J. toward the worlds of fantasy, horror, and science-fiction throughout his career. From his work on Disney’s Tower of Terror film (which we discuss extensively in the podcast) to his latest book series, The Library, which lets the reader help in solving supernatural mysteries, D.J. MacHale is the man behind countless creepy feelings and sleepless nights.

You can find more of D.J. MacHale’s latest works by checking out his website.

The song for this week’s episode is our remix of the “Are You Afraid Of The Dark” theme song. We love how it sets the tone for the creepy stories that follow it, so make sure to listen to Sunspot’s (instrumental) remix of the theme at the end of the podcast!

One thought on “154 – Are You Afraid of the Dark? A Conversation with D.J. MacHale”