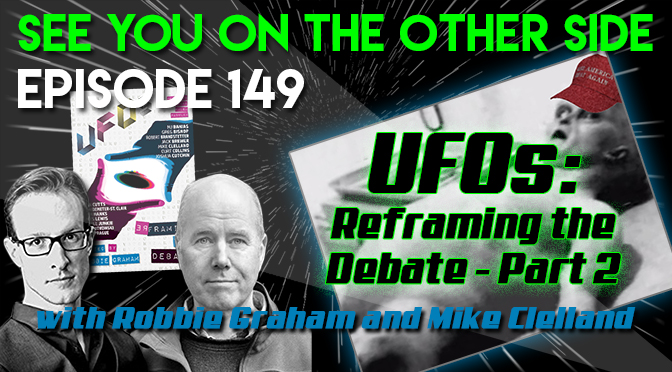 Last week, we covered the concept of “high strangeness” with Robbie Graham and Mike Clelland as we talked about the book, UFOs: Reframing The Debate, a collection of essays on modern UFOlogy conceived and edited by Robbie.

This week is the second half of that conversation between myself, Robbie Graham, Mike Clelland, and  Allison Jornlin from Milwaukee Ghosts and we talk about healthy skepticism. I think that skepticism is just as important as belief when it comes to handling therse phenomena.

If you’ve seen a UFO, it’s always going to be a “your word” vs. “someone else’s beliefs and experiences” kind of thing. If that person hasn’t had a UFO encounter, they’re going to have a more difficult time believing yours. So, what are we trying to do? Make it more believable to convince skeptics that this stuff isn’t just hoaxes and hallucinations? Or help people who have had these experiences come to terms with them and be able to handle when they believe something has happened to them that they cannot understand.

It was in April of 2015 where we interviewed UFO researcher, Don Schmitt, about the “smoking gun” that was supposed to be the Roswell Slides released on May 5th of that year at a special pay per view event in Mexico City. If you didn’t see it, the slides were supposed to be a 1950s photograph showing a dead alien body, but really is just a mummified human. A small group formed on social media to take the investigation into their own hands and debunked the slides in a matter of a few days. Cliff Collins writes about it in UFOs: Reframing The Debate.

It’s an awesome example of why skepticism is so important. This small group ended the debate on the Roswell Slides. We’re not subjected to endless TV specials or internet sites dedicated to discussing the “controversy”, people won’t be writing books about the slides in 50 years and talking about “the unsolved mystery”. It’s debunked and now we can move on to the next thing.

But even if we could make UFO experiences more “believable”, does it matter? While Internet discourse has created an atheist skeptic vs. religious believer debate where you either fall on one side or the other, the skeptics have already lost.

A 2015 poll shows that 56% of Americans believe in UFOs and 45% of them believe that extraterrestrials have visited earth. That’s a majority of Americans who think that there is something real to that UFO phenomenon and just a little less than half believe in the “Extraterrestrial Hypothesis” (that it’s aliens coming to visit).

Carl Sagan popularized the saying “Extraordinary claims require extraordinary evidence.” Healthy skepticism and scientific rigor is important, not just to debunk and rain on everyone’s parade, but to find out the cases where things that are happening are truly unexplainable and are truly weird. It’s been seventy years since Roswell and are we any closer to the truth? It’s been over fifty years since Betty and Barney Hill were abducted, over forty for Travis Walton, almost thirty since Communion…

Nothing has changed. We’re not any closer to the truth. Maybe we’ll never be – in this discussion, we talk long and hard about the futility of disclosure and at length about Tom Delonge’s Sekret Machines project that’s supposed to blow the cover of the whole UFO thing.

We have a good laugh about disclosure as well, talking about how Donald Trump would never pass up the opportunity to be the one to let the world know about extraterrestrial and giggle about an alien wearing a Make America Great Again hat.

But how we deal with the aftermath of experiencers can improve. That is something we can change. I don’t think everyone is lying or hoaxing and if we can help people come to terms with the experiences, to process it in a healthy way, then we’re doing something tremendously important.

That’s where modern skeptics can really improve. Sympathy, understanding, a psychological perspective. That’s something that the Church has a superior handle on as compared to psychiatrists. The Catholics have been trying to figure out whether miracles have actually happened for two millennia and even have a system for it, it’s certainly not completely applicable here, but it’s much more sympathetic than the Phillip Klass or James Randi approach, that just suggests experiences are deceiving or delusional.

UFOs: Reframing The Debate challenges the core notions that I had about UFOs, ETs, and even faeries and owls that I’ve had all my life. It’s the kind of book that this field needs to break out of The X-Files mindset we’ve been living in (at least until Tom Delonge proves us all wrong!) It doesn’t take sides or come in with an agenda. And if your ideas about UFO phenomena are the same when you’re done reading the book as when you started, then you’re just as closed minded as any skeptic.

One of the themes of this week’s conversation is disappointment. Whether it’s the blowup with the Roswell Slides or the fact that so many have waited with baited breath for full government disclosure to no avail, disappointment is as much a part of UFOlogy as little green men. This week’s Sunspot song is called “The Breach”, when something important to you, and breaks and it hurts, but you keep going back.

I can still taste you on the tip of my tongue,
I’m trying to hold your breath inside my lungs,
Draw me away.
Draw me amazed.
We stand outside ourselves,
so please don’t move
When I scream fire inside a crowded room.Mediocrity surrounds me,
To the point of tragedy.
And we can walk along the breach,
walk along the breach.Consumed by a devouring,
Convinced by an overwhelming.
Draw me afraid,
I watched you draw me flayed.We stood outside ourselves,
and then you moved.
When I screamed fire inside a crowded room, a crowded room.

Mediocrity escapes me,
when I hear your voice.
Barely avoiding tragedy,
We made that choice.
I closed my eyes so hard,
I didn’t know the water from the sea,
As we walked along the breach.

The crack was deeper than it seemed,
I could not cross the yawning,
that opened in my chest cavity,
The frailty that tore,
Still led us once more unto the breach.

Mediocrity escaped me,
When I heard your voice,
To the point of tragedy,
When you made your choice.
I closed my eyes so hard,
I didn’t know the water from the sea,
As we walked along the breach.

Mediocrity escaped me,
When I heard your voice,
To the point of tragedy,
When you made your choice.
I closed my eyes so hard,
To shut out the uncertainty,
Against the husk of a dream,
As we stand astride, stand astride the breach.

One thought on “149 – UFOs: Reframing The Debate Part 2 with Robbie Graham and Mike Clelland”