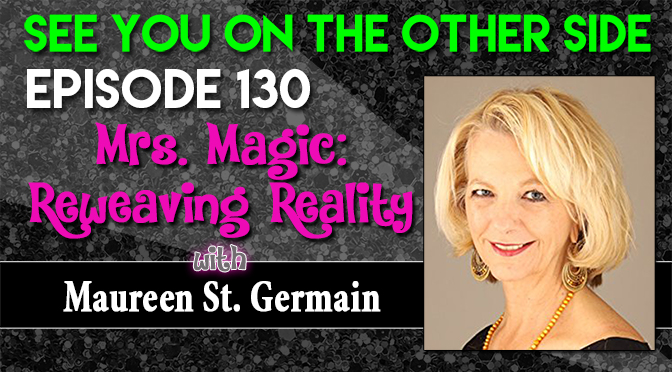 Maureen St. Germain is the author of books like Be A Genie, Reweaving the Fabric of Your Reality, and Waking Up in 5D and calls herself a “Practical Mystic”. And with a title like that and a nickname like “Mrs. Magic”, Maureen is all about finding and embracing the spiritual aspects in your own life. While the language and symbolism might be cosmic, the results are down to Earth. Mrs. Magic helps people access their fantastic sides while helping them achieve their goals, manifest love and happiness, and just get a little peace of mind every once in awhile.

One of Maureen St. Germain’s quickest tips for helping to find magic in your own life quickly is not to eliminate negativity, which is difficult and almost always leads to more negative thoughts when you can’t just “get rid of” those offending thoughts in the first place (that’s the path that leads to Obsessive Compulsive Disorder, trust me on that one.) But every time you have a negative thought, add two positive thoughts to it.

For example, since we live in Wisconsin and it’s currently winter time, when you look outside, the first think you think is usually, “Man, this is snowy and cold and disgusting.” But why not add, “Yeah, but snowball fights are fun!” and “Winter keeps property values affordable here so that my quality of life is great!” Does that sound kind of silly? Why yes, yes it does.

But it helps reinforce positivity without making you feel guilty for thinking negative thoughts. We’re always going to have reactions to things no matter what, our brains are just gonna use the pathways that are the easiest and we’re hardwired for negativity. Ever wonder why your pets are so scared all the time? Because it helps keep them alive in the wilderness! But we’re not in the jungle anymore and oftentimes, our fear holds us back.

One phrase we mention in the interview with Maureen St. Germain is “jump and the net will appear”and this might not be magic in the sense that we think of magic usually (like burning candles and eyes of newt or something) but more like how you reframe and align your thinking. And that’s about gaining access to your Higher Self.  Your Higher Self is your spiritual self that has access to the Akashic Records.

Akashic What Now? We talked a little about the Akashic Records in our interview with Garnet Schulhauser and his spirit guide Albert, but according to mid-Twentieth Century mystic Edgar Cayce, it’s the “Book of Life”, the universal supercomputer that has access to all the knowledge of the Universe across all Space and Time. If life was like Doctor Who (and you’re trying to tell me it’s not?!), the Time Lords had an archive of their history, knowledge, and of the memory of all of their species called The Matrix. The Akashic Records are kinda like that.

Okay, that’s getting into some heavy New  Age-y type stuff, but it’s not really different from learning how to trust your intuition, which has a demonstrable scientific basis. And learning how to “trust your gut” (or whatever you like to call it, your Higher Self, your spirit guide, your intuition, etc…) and how to listen to your body and your instinct is part of any kind of personal development, so the New Age style is just one of the ways that people are inspired to follow that path and it’s an essential part of everyone’s spiritual journey.

You can jump into Maureen’s class about the Higher Self right here and you can find her different variety of books, courses, and guided meditations on the Maureen St. Germain website. She’s got plenty of free meditations on YouTube so you can try it out, see what you think, and if you’re into it, learn more directly from Maureen.

Hey and here’s something sweet, the last book Maureen contributed to, The Realities of Creation: Moving Beyond the Limitations of Our Beliefs, features an intro from actress Dee Wallace who is one of our favorite  Scream Queens from The Hills Have Eyes to Rob Zombie’s Halloween re-imagining. She does spiritual healing now, what?! Yeah, I’d totally get a session too, but I think I’d probably just use my time to hear stories from the set of The Howling!