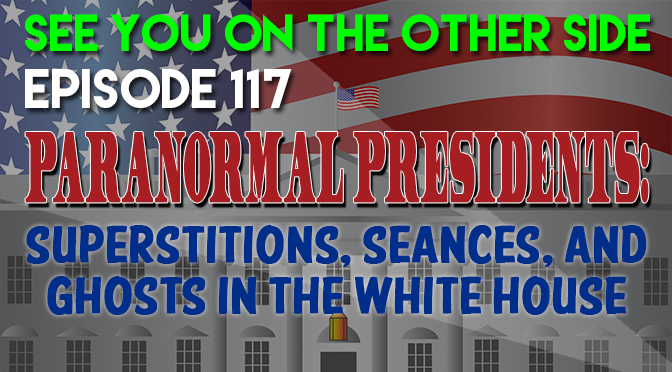 While the partisan hysterics of the 2016 Presidential Election has amateur political pundits “unfriending” each other on Facebook and torn family relationships asunder, we’re more interested in the things that can bring people together. And nothing unifies a nation like a great supernatural experience!

American presidents are no stranger to the world of the weird. From Jimmy Carter’s UFO encounter to Ronald and Nancy Reagan’s enthusiasm for astrology,  the various Leaders of the Free World have not only had their own experiences, it seems like some wanted to keep the job so bad, they’ve never left.

It’s the Lincoln Bedroom that has a ton of paranormal presidential stories and people have seen the spirit of good ol’ Lincoln himself, his wife Mary Todd was a believer in spiritualism who wanted to contact the spirit of their deceased son and it’s believed that they conducted seances in the White House. From premonitions of his death to ghosts of the conspirators involved in his assassination, it seems like Lincoln’s afterlife has been just as eventful as his life.

Speaking of Lincoln, it seems like he was the victim of the “Tippecanoe Curse” of William Henry Harrison. Because of Harrison’s brutality to the Tippecanoe Tribe in Indiana it is said that they cursed him to die in office and that  every President elected 20 years after would die in office too. And it happened. From Harrison all the way up to JFK, 1840 to 1960, 120 years. Ronald Reagan broke the curse by surviving his eight years in office, but he was the victim of an assassination attempt 69 days into his presidency that he barely survived. The Gipper has his own ghost story in the Lincoln Bedroom as well!

It’s the WikiLeaks release of Hillary Clinton’s campaign chairman (and noted X-Files enthusiast) John Podesta’s emails that has brought the paranormal aspect to the 2016 Presidential campaign. The news sites can talk about the DNC plotting against Bernie Sanders, private email servers, donations to the Clinton Foundation,  blah blah blah… we’re more interested in his email exchanges with conspiracy theorist/punk rocker Tom DeLonge and dearly departed astronaut Dr. Edgar Mitchell that made headlines earlier this year. Plus, just before the election it was discovered that he was invited to an Aleister Crowley-inspired “spirit cooking” ceremony, so really John Podesta is the paranormal hero of the 2016 election.

This being Election Season, of course people have been asking us about our official opinion for President and we’re proud to endorse a candidate that we really can believe in. We even wrote an Election Day song for our preferred candidate. This year the best option is to “Vote Cthulhu”!

On the left or on the right,
It won’t matter where you stand,
When you’re driven mad from fear,
You just won’t care in a wasteland.
That is not dead which can eternal lie,
And with strange aeons even death may die.

If you’re gonna waste your vote, well why not waste everyone else?