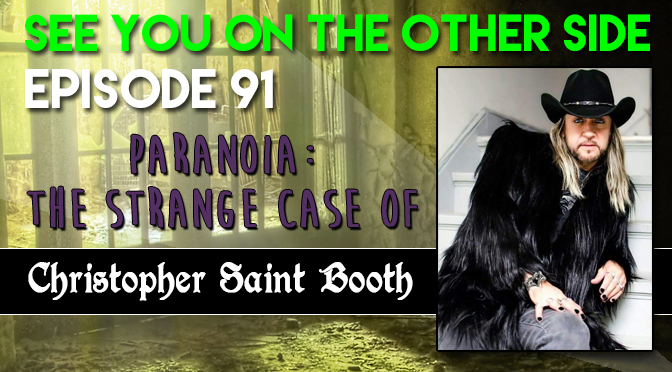 Quick update on some fun things this week, Wendy and I will be at the Paradigm Symposium paranormal convention in Minneapolis this weekend, so look out for us and let’s hang out if you’re there!

Also in more fun haunting news, I just launched St. Paul Ghost Walks which is the first haunted history walking tour of downtown St. Paul, Minnesota (I like to call it the Evil Twin) and that launches this Friday the 13th!

And there’s still time to vote for our band, Sunspot, in the Madison Area Music Awards – if you voted in the first round, it doesn’t cost anything to vote for us in the FINAL round (ends May 19th). If you haven’t voted, it’s five tax-deductible dollars and every penny goes to helping out music education in Madison area schools. It’s a cause we believe in deeply and are proud to have been supporting this charity since the beginning.

This week, I got to take some time to talk to a creator after my own heart, Christopher Saint Booth. As a musician, film producer, and paranormal investigator with a superb sense of style, he and his brother Philip bring glam chic and a distinct sophistication to the world of the weird.

I met Christopher at the Chicago Ghost Conference (Episode 61 of the podcast has our haunted wrap up) when Allison from Milwaukee Ghosts  grabbed a copy of his book, The Exorcist Diary: The True Story, which is an adaptation of the original journal kept by the priest who was performing an exorcism on a boy named Roland Doe, and that was the real-life story that would eventually inspire William Peter Blatty to write the pea-soup barfing, crucifix-humping movie that we all know and love, The Exorcist.

In our conversation, we start with his career as a musician on the Sunset Strip in the late 70s and early 80s and his move into art director on various films (hey man, he got to work on Dreamscape, the film where people could travel into each other’s dreams and we’ve talked about it on this podcast a bunch of times!)

In addition to some fun Hollywood stories, Christopher shares with us some of his real life paranormal experiences that he’s also documented in an autobiographical book called PARANOIA – The Strange Case of Ghosts, Demons, and Aliens.

While he’s always been into horror movies, what I think is interesting is how the brothers stumbled upon becoming paranormal filmmakers. They were filming a movie called Death Tunnel at Waverly Hills Sanatorium in Kentucky, a legendarily haunted hospital that has been closed for decades. In the script, they used the real legends of the sanatarium for inspiration.

But the real show was what was happening behind the scenes. They got so much footage of weird stuff occurring while they were filming that they were able to make a documentary, SPOOKED – The Ghosts of Waverly Hills Sanatorium with weird footage, EVPs, and haunted history of the famous building.

And that documentary led them into a brand new direction, being able to create fictional movies based on the historical legends and then going in depth on the truth behind them, a real mix of the paranormal and pop culture. This was a fun interview full of anecdotes, paranormal tidbits, and a discussion on following your passion, whether it’s musician or filmmaker or gourmet hamburger artist (or a veggie burger artist for me!)

It’s that discussion of living your life with passion that inspired this week’s song, “The Wilderness of Almost Was and Never Were”. Everyone has their own definition of “selling out”, so the trick is to make sure you understand it or someone else will define it for you.

What happened to the kids who got lost in the blur,
The wilderness of almost was and never were.
You used to plan, you used to scheme,
We used to curse the old regime,
What did you surrender. for legal tender,
Was your price more than your dreams?

When they come to you to sell out,
Just promise to put up a fight,
And realize you’ll never be so close as you are tonight.

Drowning in your memory, and you’ll drown right in your hurt,
The wilderness of almost was and never were.
We used to fight and get worked up,
We said up.
What do you remember about your surrender?
Did you get your damn closeup?

One thought on “91 – Paranoia: The Strange Case of Christopher Saint Booth”