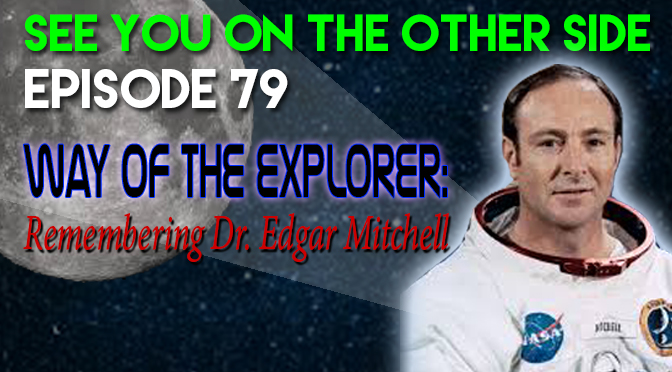 We recorded this episode on Valentine’s Day 2016, which is why we open with discussing Ghostbusters II (a film I feel is unfairly maligned because while the plot wasn’t as strong as the original, there were still some excellent jokes!), where the opening scene showed Peter Venkman hosting a paranormal show where he had two guests who predicted the end of the world.

One of the guests predicted the end to be February 14th, 2016 to which Bill Murray responds, “Valentine’s Day. Bummer.”

Well, the world didn’t end this last V-Day, so add it to another missed apocalypse date (a topic we discuss in Episode 58!),  but on February 4th, 2016, we did lose an important figure in the world of psi research and astronautics. Dr. Edgar Mitchell was the Sixth Man on the Moon and while you expect that kind of journey to change your life, it did even more for Dr. Mitchell.

“On the return trip home, gazing through 240,000 miles of space toward the stars and the planet from which I had come, I suddenly experienced the universe as intelligent, loving, harmonious.”

Dr. Mitchell was already interested in psychic research (indeed, he even planned a telepathy experiment while he was on the lunar mission!), but his samadhi moment (that feeling of being one with the universe) directed the course of his life from then on.

Soon after his return to Earth, he founded the Institute of Noetic Sciences which is a research organization dedicated to exploring the mysteries of consciousness. He became an outspoken proponent of UFO disclosure as well, stating that “I happen to be privileged enough to be in on the fact that we have been visited on this planet and the UFO phenomenon is real, although it has been covered up by our governments for quite a long time.”

Dr. Mitchell brought a seriousness and authority to UFO and psychic research that few others could. Astronauts were not only in peak physical condition and Navy pilots, but they were also PhDs who were admired and respected among all kinds of Americans. Mitchell was no slouch, earning his Doctorate from the Massachusetts Institute of Technology, and his death leaves a large hole in the credibility of the field.

He did bum around with Uri Geller for a time in the 70s and Uri tends to spike readings on people’s skeptic-meters, so that’s something we discuss in the podcast. But while Uri’s natural talent for show business might have killed his credibility with the psi research community, could there have been real some psychic phenomena in the beginning? Did we lose years of valuable research because Uri wanted to pal around with1970s celebrities?

Dr. Mitchell wrote a book about his experiences and his philosophy called The Way of the Explorer: An Apollo Astronaut’s Journey Through the Material and Mystical Worlds and he was a popular guest on shows  like Coast To Coast AM as well as at UFO and paranormal conventions. Not only did he have great stories (an astronaut is automatically the most interesting person at every party), but a great attitude as well.

His bravery in the face of ridicule from the scientific community and his dedication to keeping an open mind in research serves as an inspiration to every explorer out there, paranormal or otherwise. And of course, if you’re brave enough to handle a rocket launch and re-entry from Earth’s orbit, ignoring a skeptical blogger doesn’t seem like such a big task!

What I find most heartening is his deeply held belief in the oneness of humanity and our connection to everything in the universe as well as each other. Most people get cynical as they get older and more set in their ways, but Mitchell kept his spiritual awakening spirit all the way to his earthly end.

This week’s song is inspired by Dr. Edgar Mitchell and the optimism that came with the pioneering days of space exploration, “Shoot For The Stars” by Sunspot.

Not even that long ago,
you could look up to the sky and know,
that’s a place you could go.
Daydreaming of astronauts,
We weren’t just happy with what we got,
On this pale blue dot.

Never thought that we’d still be here
Fifty years on, still stuck to the ground
and we’re still earthbound.
If the world has changed so much,
and those old dreams are out of touch, don’t you budge.
Just keep looking up.

One thought on “79 – Way Of The Explorer: Remembering Dr. Edgar Mitchell”