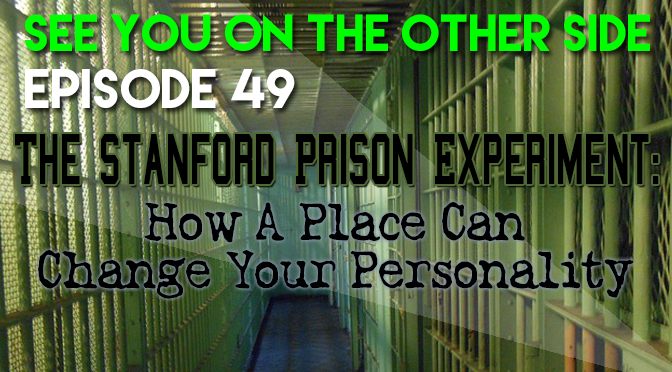 It’s Summertime in the Midwest, so Mike and Wendy don’t waste the nice afternoon by recording this podcast on a patio outside (so excuse if you hear a little traffic or some birds every once in awhile.) First things first, we’re coming up on episode 50 – so if you want to win a fun prize package, just tweet at us (@othersidetalk) your favorite episode so far along with the hashtag #otherside50 and we’ll pick some people randomly to get a totally sweet prize package of music and merchandise for celebrating our 50th episode with us next week!

So, one of the movies that just came out is a dramatization of an experiment gone awry from the Me Decade. In 1971, the US Naval Research Institute funded research by well known evil scientist, Doctor Philip Zimbardo (for real, Mike used to watch his videos in psychology class and the man can hypnotize people instantly and make them do crazy things, like submerge their hand in ice cold water for long periods of time and then have them calmly tell them how much pain they feel. Sure, it’s super cool, but damn, man…)

Okay okay, he’s not really an evil scientist at all, but one of the world’s most respected psychological researchers as well as a president of the American Psychological Association, and by all accounts, a pretty nice guy with good intentions (to dominate your brain!) He was the impetus behind the infamous Stanford Prison Experiment (which is also the name of the new movie!) which wanted to explore the idea that just the very roles of prisoner and guard could somehow create abusive situations in incarceration facilities.

The methodology of the experiment is that they put up an ad looking for young men to participate and the twenty-four most “psychologically stable” candidates were selected to participate. They were paid fifteen dollars a day and it was supposed to last for two weeks. Half of the men were prison guards and half were inmates and they’d be set up in a “prison” in a converted basement of a Stanford University building. The prisoners were “arrested” at their houses and went through a full police booking process with mugshots and everything. The prisoners were given numbers and the guards were encouraged to refer to them by their numbers. The guards were given batons and uniforms to look official. Okay, two weeks, right? And it’s just roleplaying, people can handle that, right?

Wrong! By the second day, one group of prisoners refused to leave their cell. Extra guards had to be called in to “quash the revolt”. Prisoners who didn’t participate in the little rebellion were rewarded with better meals and a more comfortable room. By the second day. Thirty-six hours in, one prisoner freaks out so bad, he has to be sent home. Guards start making prisoners use a bucket for a toilet in order to punish them, others are forced to strip named.

By day four, it’s rumored that the prisoner who had to be sent home on day two is coming back to “rescue” everyone. Even Dr. Zimbardo himself believed the rumor and waited around just in case something went wrong.

By the sixth day, one of Zimbardo’s students (who would later become his wife) was doing some interviews and lets him know that things are really out of control and this is booming unethical. He proceeds to shut it down.

Just six days in and the Stanford Prison Experiment shows that regular people can become sadistic towards each other even just through roleplaying. They can strip each other of their humanity in a surprisingly short amount of time and for no good reason.

There were criticisms of the methodology, that the group was selected from a newspaper advertisement seeking volunteers for a “psychological study of prison life” (and what kind of people do you think are going to respond to that and can give up their regular lives for two weeks for a mere $15 a day?) And also the researcher effect, did people start acting like that because they thought that’s what the researchers expected them to do?

Over the years, the Stanford Prison Experiment has become legendary in psychological circles and is often brought up in popular culture. From being an inspiration for a great ABC Afterschool special in the early 80s (also based on a true story!) called The Wave to episodes of Law and Order and Veronica Mars, and now the eponymous movie that just hit theaters.

One doesn’t have to look too far to see shades of Abu Ghraib in this whole thing. What turned regular U.S. Army soldiers into the kind of sickos who would torture Muslim prisoners? Was it because they thought that was their job? Was it something they always wanted to do and thought that the could finally get away with it? Was it the situation in a Prisoner of War camp that made them resort to cruel measures?

So can your situation make you do things that you wouldn’t normally do? Prison is one area, but we get into the paranormal implications of it. If you’re in a place where violence or cruelty occurred or that is haunted by an “evil spirit”, can that affect your personality and turn you into something you’re not? That’s something that happened in our former guest, Deborah Moffitt’s book A Deadly Haunting, where her father-in-law changed over time into a cruel and evil man.

It’s one of the central tenet’s of Stephen King’s The Shining, where recovering alcoholic Jack Torrance gets infected by the ghosts that are haunting the hotel and hunts his wife and son with murderous intent (insert Stephen King’s own struggles with alcohol and drug dependency here…)

And there’s been many situations of a a supposed haunting in a house changing the personal behavior of the people that live there. One of the most recent cases is from Mayer, Minnesota in 2005 (one of the few cases that actually makes the newspapers) where the residents’ behavior starts changing for the worse when they started seeing shadows, hearing invisible footsteps and conversations, and the mother involved was even pulled down the stairs by an unseen force.

So, assuming a role can make you do things you’d normally find immoral, being in a prison situation can turn you into a prisoner or a guard, when in real life you’re neither, and maybe being in a place with evil energy can start twisting your mind. Next time you’re having unusual thoughts, think a little bit about where they might be coming from before you act on them!

This episode’s song is “The Bottom” by Sunspot.

When the floor fell through, I just knew how it would end,
When there’s nothing left, you find out the definition of friend.