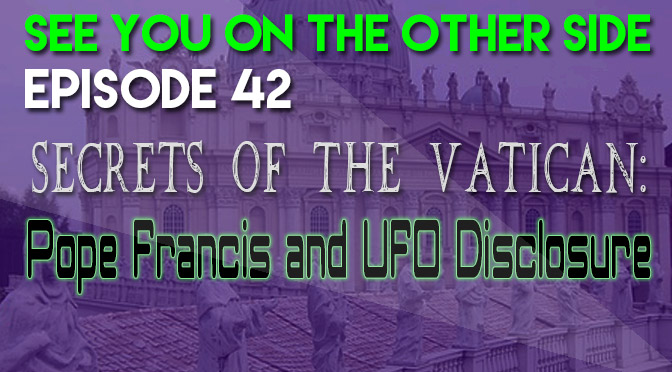 Once again, Mike and Wendy are joined by Milwaukee Ghosts’ Allison Jornlin for a discussion on some upcoming web articles that Pope Francis is going to finally disclose that alien life has visited Earth and we’re going to make real first contact. Why Pope Francis and what does Catholicism have to do with extraterrestrial life? Well, the Catholic Church has been setting up the possible existence of aliens for years now, and that’s what we discuss about the podcast.

Mike mentions that he finished his marathon in Minneapolis on Sunday and they discuss their appearance on BBC Radio 5 discussing the #charliecharliechallenge.

Whatcha gonna do when Hulkamania runs wild on YOU?! #nikeplus #minneapolis #marathon

But first, we preview the Milwaukee Paranormal Conference where Allison will be a featured speaker on Milwaukee Forteana and we’ll all be hanging out recording the next podcast and talking to attendees to get their weirdest stories.

Okay, so Pope Francis, popular among people outside of just Catholics because he’s brought new life into an old Church with his Liberation Theology politics (Catholics are usually economically liberal and socially conservative, like the political opposite of Libertarians) more tolerant attitude on social issues versus the hardline of Pope John Paul II and the unpopular-in-the-United-States Benedict.

So, with Pope Francis setting the world on fire with his decrees and allegiance with the poor, is he the one who’s going to reveal the existence of aliens to us? There’s been several articles this week that he might do so on June 5th(!) or perhaps a little later in the month.

It’s not like Catholics don’t have a fascination with outer space, in fact, there’s a Vatican Observatory located in an extinct volcano in Italy (as well as a branch in Tuscon, Arizona of all places!) and the Vatican lead a special conference on extraterrestrial life in 2009. Pope Francis himself in 2014 declared that he would baptize Martians if they came to Earth and wanted to become Catholic.

The Vatican Observatory and the scientist priests that work there have also been featured in films like The Omen (the birth of the Anti-Christ is foretold in star alignment just like the Star of Bethlehem) and Arnold Schwarzennegger’s blockbuster movie, End of Days (Mike proceeds to do a horrible Ah-nuld accent through much of the podcast once they start talking about this film.) Allison thinks that they might be using the observatory to look for Biblical prophecy and signs of Armageddon (not the crapola Bruce Willis movie, please) or Revelation.

Then this breaks down to a talk about Asteroid Day which is coming on June 30th and all involved declare their love for Brian May, the guitarist of Queen and astrophysicist, who is an advocate of the new holiday.

Finally, the discussion goes into whether or not Jesus and Satan were aliens, which is the premise of the John Carpenter classic, Prince of Darkness (which you can watch on Google Play or iTunes right now for not even $3, so if you haven’t seen it, stop what you’re doing and go watch it right now.)

Anyway, the conversation ends with a discussion on how it’s a touch hypocritical that the Church looks down on Astrology and Divination, yet looks to the sky for Biblical prophecy and signs from the stars, so what do they know that we don’t? We hope to find out this month when the Pope finally declares that aliens live among us and we for one welcome our new extraterrestrial overlords.

Song of the Week: “Messiah Complex” by Sunspot

When Constantine saw the cross,
burning in the sky,
Another bleeding heart thinks they can fix our broken lives.
While you’re waiting for your vision,
In your existential dread.
These bargain basement martyrs
Still just wind up dead.

It’s the messiah complex,
that happens before childhood’s end.
But just because you’re not alone,
doesn’t mean you have a friend.

So save yourself,
in a world full of victims,
Spending their whole life,
waiting for the knife.
Save yourself,
we got to save ourselves,
Or we’ll never survive.
No one gets out alive.

They tell us we have sinned,
they tell us we are cursed,
and if you want to get to Heaven,
you’ve got to walk through Hellfire first.
So you’d like be a saint
Well, here’s my advice,
all that crushing guilt is just empty sacrifice.

It’s the messiah complex,
that happens before childhood’s end.
But just because you’re not alone,
doesn’t mean you have a friend.

So save yourself,
in a world full of victims,
Spending their whole life,
waiting for the knife.
Save yourself,
we got to save ourselves,
Or we’ll never survive.
No one gets out alive.