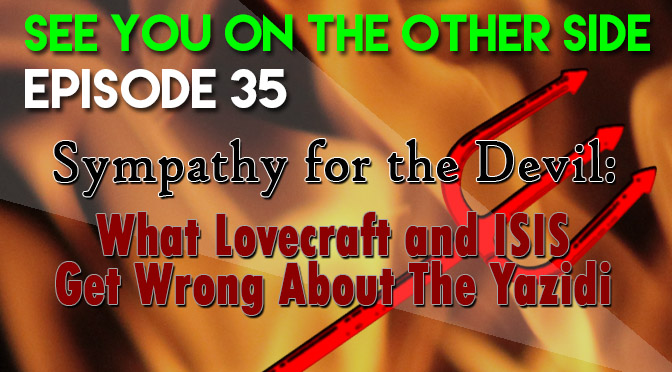 Joining Mike and Wendy today is Milwaukee Ghosts’ founder, Allison Jornlin, for a discussion about a Kurdish ethnic and religious group currently in the news for being attacked by ISIS, the Yazidi. You guys remember The Kurds, right? They’re the ethnic group who believes in women’s rights and is cool with democracy, basically they’re the good guys in the Middle East whom the rest of the people in the area are constantly persecuting. Saddam Hussein loved to “re-educate them” and the Islamic State isn’t much nicer to them. Well, one of the reasons that the Yazidi is so unpopular in the halls of Middle East High is because Sunni Muslims believe that the group worships the Devil. Yeah, that sounds bad, and that’s why we get at the heart of the truth in this episode.

To get the conversation started right, they discuss current beliefs about The Devil, as the Vatican hosts a special exorcism course this week in Italy (they’re calling it a pastoral emergency.)

In the Yazidi religion, which borrows heavily from Judaism, Christianity, Islam, and Zoroastrianism, when their lead angel Taus Melek (they call him the Peacock Angel, and use Avian imagery to describe him), originally refused to bow to Adam (of Adam & Eve, Garden of Eden fame) , it’s similar to the pride that leads to the Fall of Lucifer in Christian mythology. But instead of pride, Taus Melek refuses to bow to Adam because the human is an earthly creation and not a heavenly one. He has a disagreement with God, but in the end, they make up and the Peacock Angel ends up feeling bad for what he has done and reconciles with the Almighty. So, one of the major figures in their religion is basically a redeemed version of Satan. And that’s where the misconceptions come in.

H.P. Lovecraft famously makes them the bad guys in his short story, “The Horror at Red Hook”:

“Most of the people, he conjectured, were of Mongoloid stock, originating somewhere in or near Kurdistan—and Malone could not help recalling that Kurdistan is the land of the Yezidis, last survivors of the Persian devil-worshippers.”

We made Wendy read one of the author’s most notoriously racist and lazy stories for this episode and we find out what happens when we sacrifice a virgin at the altar of Cthulhu.

But Lovecraft isn’t the only one, The Exorcist, uses Yazidi imagery as well in their portrayal of Pazuzu, the demon who takes over the body of Linda Blair’s character in the film. The avian imagery of the idol that Father Merrin (Max Von Sydow, the “old” exorcist) encounters in his travels through Iraq is one of Hollywood’s most famous visual depictions of The Devil. Basically, they took a Yazidi image, Taus Melek, and told everyone that it was going to possess the souls of their daughters – can you see why these poor people get such an unjust reputation?

We get into a little more of the Yazidi creation myth, appropriate because Wednesday April 15th was the Yazidi New Year, so Happy New Year, Yazidis! And then we finish up the episode with this week’s song.

The Vatican, “Course of Exorcism, Prayer, and Liberation”

CNN, “A Yazidi captive’s tale: Sold by ISIS as a sex slave”

The Exorcist Connection, The Telegraph, “The Devil Worshippers of Iraq”

Hold my outrage tight to me,
Righteousness like a shield.
My indignation,
is a wound I’ll never heal,Slights and jabs and every little pain,
Long memory plays every scar again.

In this barbwire heart,
beats my rosary,
without its angry rhythm,
I don’t know who I’d be.

Picking my scabs bloody,
Reinfected every sore,
Every step I take is,
Towards evening the score.

Slights and jabs and every little pain,
Long memory plays every scar again.

In this barbwire heart,
beats my rosary,
without its angry rhythm,
I don’t know who I’d be.

2 thoughts on “35 – Sympathy For The Devil: What Lovecraft and ISIS Get Wrong About The Yazidi”