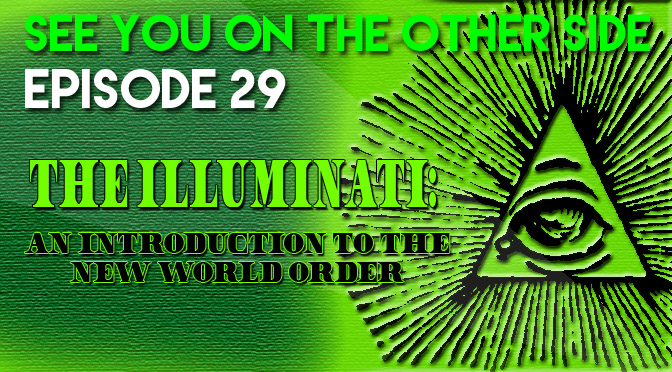 For a secret organization hellbent on guiding the future of the human race, The Illuminati doesn’t really do a great job with the whole secret part. Everybody knows about it, but a lot of people don’t realize that it started with an actual secret society in the 18th Century. Mike and Wendy Lynn are here to give you the skinny on the most famous of conspiracy theories.

The conversation starts with the origin of the organization in 18th century Bavaria as a way to lessen the influence of the Catholic Church on German government “Illuminati” was an organization of The Enlightenment, meant to banish fear and superstition (or so they would have us believe!) Either way, the organization was supposedly disbanded only a few years later, but that’s what they want us to think.

The modern conspiracy theory really begins with the most famous of the anti-Communist organizations and the Granddaddy of a good deal of today’s conspiracy lore, the John Birch Society. During the Red Scare of the 1950s who first used the term New World Order (NWO) to talk about an atheistic one-world government that those damn commies dreamed about. Ronald Reagan then gave an unusual speech before the United Nations that basically spoils the ending of Watchmen and George H.W. Bush actually used the term, “New World Order” in a speech in 1990. That settled it, the Illuminati was real. And they’re using our Pop stars to control our minds.

We go over the symbolism in Lady Gaga’s videos and Madonna even titled a song on her latest album, “The IlluminatI” and she mentions how she is “proud to be one of them” (but she might be a little off on her definition of who actually was in the original Illuminati group.)

As all conversations between Mike and Wendy go, the discussion eventually wraps up with Katy Perry, who is bought and sold by the global elite. Don’t believe us? Just check out her video for “Dark Horse”. Her Super Bowl performance was the Illuminati’s biggest coup because it was seen by over a billion people around the world and there are those on the Internet who are happy to analyze it for every little bit of occult imagery. (To be honest, The All-Seeing Eye is a pretty weird thing to have on our money!)

33 Signs That The Illuminati Is Real, Buzzfeed

Decoding Illuminati Symbolism: The All Seeing Eye and 666 Hand Gesture

Some are happy
just to follow,
some just want to
pull our strings.
Some are sheep,
some are shepherds,
some people think
they know everything.